It may be the calm before the storm, but there were signs over the past week that Ireland is showing its best side as we face up to the coronavirus challenge. 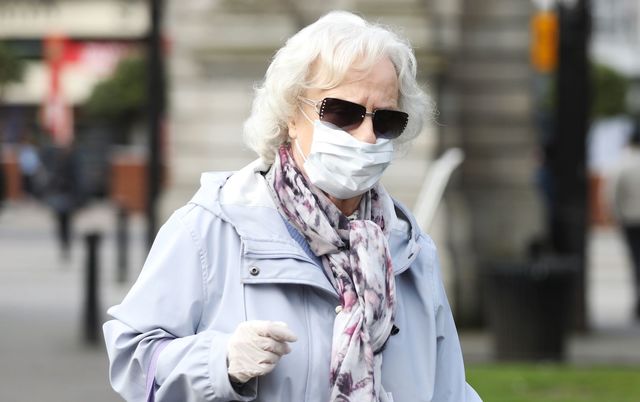 It may be the calm before the storm, but there were signs over the past week that Ireland is showing its best side as we face up to the coronavirus challenge.

Most people are doing their best to follow the instructions from the health authorities, observing the rules on social distancing and cough etiquette and isolating themselves if they feel ill while they wait to be tested.  People are anxious, even fearful, but there has been no panic here so far.

The mood last weekend, boosted by several days of glorious spring sunshine, was that we might be able to get through this without the awful scenes we have witnessed in Italy.  In three days over the weekend, we had just over 100 new cases each day, which seemed to be manageable.  But the reality is that the expected surge in cases into the thousands is still likely in the coming two weeks.

Read more: "Give it a lash" - Pres. of Ireland offers encouraging words during pandemic

So the storm may well be on the way after this brief period of calm.  What is encouraging is that in times like this the Irish tend to stick together.

A challenge -- even one as unprecedented as this -- brings out the best in us.  And there have been several illustrations of that in recent days. 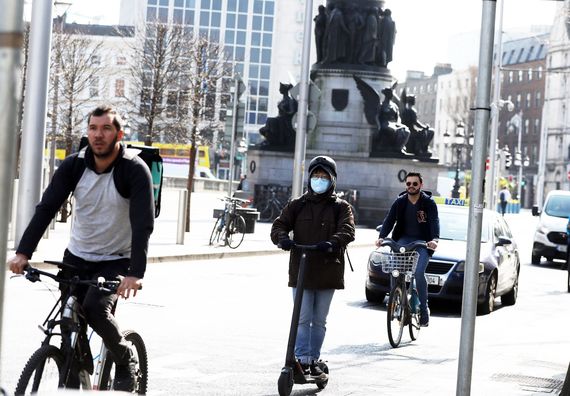 Cycling on O'Connell Street during the covid-19 outbreak.

All over the country, neighborhood groups have been reaching out to reassure and help those in difficulty.  Residents associations have been contacting the elderly who may need assistance with shopping or fuel supplies.  Online activities are being organized to entertain adults and occupy kids at home.

After a day or two of frenetic activity a week ago, supermarkets say that shopping has now settled down, even if they are far busier than usual.  We have not seen anything like the hysterical level of panic buying that has plagued supermarkets in Britain, with long lines outside and empty shelves inside.

In addition to that most supermarkets here are now controlling the numbers in-store, limiting the number of certain items each shopper can buy and setting designated hours when only the old and vulnerable are allowed inside.

Probably the most striking example of the national community spirit has been the response to the call from our health service to Irish medics abroad or retired at home to step up to the plate.  Close to 50,000 have volunteered, with many coming home from countries around the world.  This is in sharp contrast to the U.K. where a similar plea was made but produced only a minor reaction.

Of course, it has not all been perfect here.  A very small number of bars and restaurants remained open last week despite the request from the government for all to close and they still had customers. 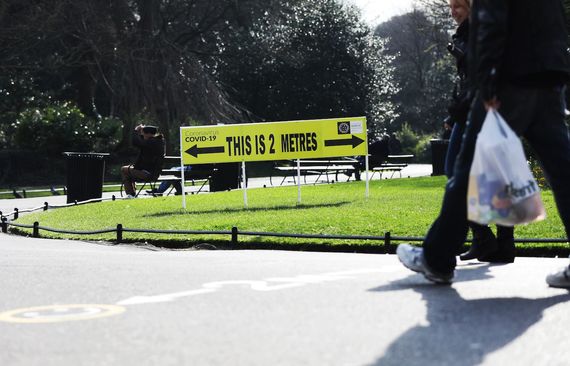 A sign in St. Stephen's Green shows exactly what two meters is.

There are idiots everywhere.  But that is now being dealt with under special legislation passed last week which gives the state powers to force closures where necessary.

There was also an ongoing problem with teenagers still congregating in groups as though they were on school holidays rather than in the middle of an emergency.

But it was noticeable last weekend that more adults were intervening and ordering them to keep their social distance for the sake of everyone.

Another disappointment was the aftermath of the release of a few hundred prisoners from our overcrowded jails last week.  Instead of being thankful and behaving themselves, some of them took the opportunity to raid bars and other premises that had been closed.

In general, however, the reaction to the situation has been very encouraging.  The much-repeated line that we're all in this together may be a cliche, but people here seem to have taken it to heart, as they did the taoiseach's address to the nation on St. Patrick's Day.

The feeling so far is that the government, despite being only a caretaker administration after the beating they took in the election, is performing well under immense pressure.  And the same is true of our much-criticized health service.

How long that will last remains to be seen, particularly when the numbers start to rise.  As mentioned above the number of new cases here was rising at a rate of between 100 and 200 a day over the weekend.   The total number of confirmed cases in the Republic reached 906 on Sunday night (or over 1,000 including the North).  But that is only the number of people who were found to have the virus after being tested -- there are many, many more out there who have not yet shown symptoms. 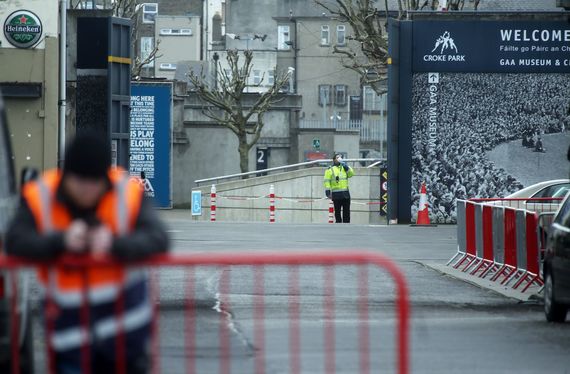 Croke Park, home of the GAA, has opened as a testing center.

Around 10,000 people were tested here last week and there are currently 40,000 awaiting tests after being referred by their own doctors or emergency crews.  The current wait time for a test is around five days, although the authorities say that it will come down as testing increases.  This week there will be 40 testing centers at work around the country and over 5,000 tests a day will be done, according to the Minister for Health Simon Harris.

What that means is that the number of confirmed cases of people with the virus is likely to increase rapidly.  Taoiseach Leo Varadkar said recently that the expectation was that there would be 15,000 cases by the end of March, which is now just a week away.

So we would go from 906 cases on Sunday night to 15,000 cases in just over one week.  That is still what the health authorities are predicting and if it happens it will give a completely different -- and more accurate -- picture of what is going on here.

It's a scary thought, and it could be the beginning of a terrifying surge in the number of cases here.  That is why the authorities are working flat out to provide extra beds, intensive care facilities, ventilators and so on.

But if this surge intensifies as predicted there is little hope that our health service will be able to meet the level of need, no matter how hard they work.  That is why it is so important to flatten the spike (slow down the rate of infection) before we get into the situation Italy is in -- we are about three weeks behind them. 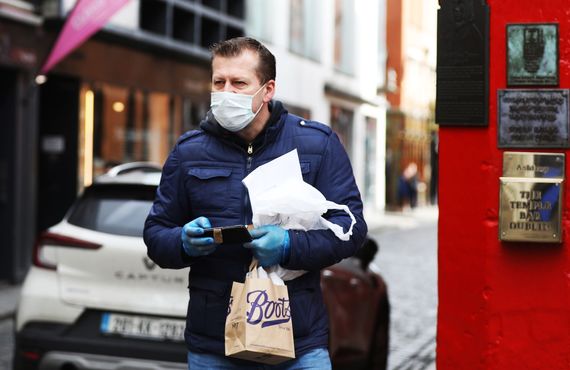 Out getting essentials in Dublin.

That can only be done by the public completely buying into the strict measures being promoted by the health authorities, washing hands, social distancing, etc.   If that is not enough to slow the spread, then the kind of lockdown measures we have seen elsewhere in Europe will be inevitable here.

People will be ordered to stay indoors to prevent any contact, and the recent legislation will enable the police and the army to enforce that if necessary.  All "non-essential" businesses will be ordered to close, just as in New York.  Public and private transport will be drastically curtailed, if not stopped altogether, to prevent people from moving around.

If that does happen such a complete lockdown would be a total shock -- in the glorious sunshine here last weekend there were crowds of people on beaches and in public parks where they had gone with the good intention of staying the recommended six feet apart.  With all the schools closed and many people off work or working from home, the atmosphere was like the holidays.

But so many people were out it made social distancing difficult.  There were long lines at ice cream stalls and fish and chip shops and not everyone was staying apart as the holiday mood prevailed.  The police had to close the car parks at some beaches and parks to try to control the numbers, an omen of what might be just a week or two away.

Here in Dublin, we're in much the same position as New York right now.  We're not as shut down, but that may be just days away.

We're hoping for the best but we're not really prepared for the worst.  Nobody is.