The rush, the chaos and the bliss in the last week before Christmas... this is what makes it worth coming home. 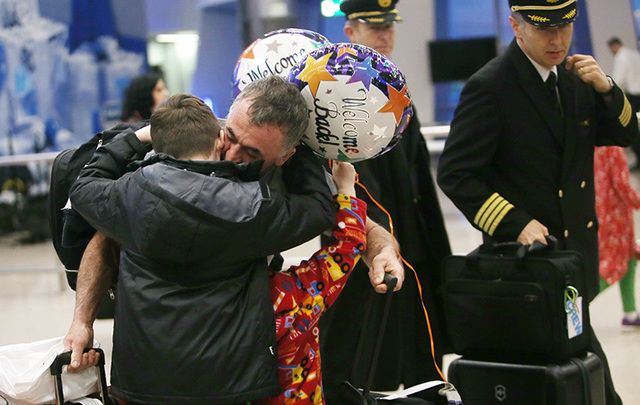 The rush, the chaos and the bliss in the last week before Christmas... this is what makes it worth coming home.

Arriving home in Dublin Airport, I practically ran off the plane. Knowing I needed to sleep in order to defeat the jetlag and so on and so forth, I had intended on napping en route, but there was absolutely no hope as my flight had the potential to be six hours of total torture. Had I not been so excited, the mess may have gotten to me.

From the moment I boarded to the moment we touched down in Dublin, I was surrounded by screaming babies. Several of them, like a chorus of pain, anguish, and terror at the mere fact of being airborne. I could just about interpret their screams as desperate questioning of their guardians’ parenting skills: why have you brought me on this hellish journey?

I want to be one of those people who feels bad for the poor parents, but I’m not. I feel bad for me, and even more than that, I feel bad for the screaming child whose ears have popped and is quite simply yelling in pain for six hours. Miserable.

So, yes, when we were given the green light to depart the plane I fled the scene. I bounded into the baggage claim, ready to launch myself into my own parents’ arms and fully embrace the Christmas spirit of home. Instead, the baggage belt was somehow faulty in the most classic Irish way, and we stood there at 5 a.m., a planeload of bleary-eyed idiots, waiting over an hour for our bags.

When I finally made it to arrivals, I felt more like crawling than skipping until I suddenly found myself surrounded by hundreds of people and several camera crews - RTE capturing moments of everyone returning home for Christmas. The emotion in the airport was palpable, expectant faces of mothers, fathers, siblings and significant others as their loved ones came through the doors.

Frantically searching for familiar faces amidst the flashing lights, I finally saw my ma and da. Needless to say, the tears began to flow, and we blended in with the crowd of similarly emotional families around us. Another cog in the wheel, another part of the annual story of families reunited for the holidays.

Read more: How to make a Guinness chocolate cake for Christmas

Bundled into the car and on the road home, my mother turned to me and asked, “So, what do you want to do?” and I imagined that all of us who got off that plane was being asked the same thing. When you get home from being away for so long, what are the top things on your list to do in your home country, your hometown?

Being the monster that I am, and living in the city of pizza and burgers, my first point of call was food. We all have our list of childhood and even adulthood favorites, whether it’s Tayto crisps, Brennan’s bread or Heinz baked beans.

For me, it all boils down to a cuppa Barry’s tea and a slice of McCambridge’s brown bread with Kerrygold butter. All best served with a classic gossipy catch-up with the parents.

It's all about the Barry's tea and McCambridges brown bread.

Once settled in, and the family has been seen, heard, and fully caught up with on all the important details, it’s time to see friends. One of the main rites of passage of the Christmas season in Ireland is the 12 Pubs of Christmas.

This, the grossest display of competitive alcoholism has somehow prevailed among the long list of traditions, continuing to serve our international reputation as a sea of alcoholics. They’re not WRONG though, are they?

In an effort not to publicly humiliate myself by drinking at all 12 pubs, and seeing my entire group of college friends for the first time in 12 months, I decided to join at pub number 11 when everyone else was borderline catatonic and I could still put something resembling a sentence together. Needless to say, seeing everyone all at once is somewhat overwhelming.

You find yourself saying the same thing over and over again, and it all begins to feel like an organized mixer. I nearly wanted a little name badge with details denoting my current form of employment, place of residence, and state of mental balance.

When I came home for Christmas two years ago, I was one of many. This year, one of few. The change felt very obvious to me.

The combined fear and pressure of coming home culminates in impressing everyone. It’s an overtly acknowledged fact -- we want to come home with news of a promotion, sporting the latest New York City fashion, with a ton of witty anecdotes about the nightlife, the arts, the daily lifestyle. Add in the aftermath of a public breakup that involved other people you are suddenly forced into the same room with, you’ve got yourself a recipe for flying off the handle.

And yet, as strong as the temptation was to pound several tequilas and go full soap opera on the situation, I like to think I held it together and survived the first obligatory emersion into a social circle from which I now feel very removed, and within which very watched.

The more joyous occasions are yet to come -- intimate dinners with close friends, karaoke parties without the pressure of seeing everyone for the first time, coffees and cocktails with one or two at a time, having actual conversations and fully catching up on each other’s lives. It’s these more meaningful interactions that make being home a truly special experience.

The real highlights are always the family traditions that have been upheld since childhood. Decorating the Christmas tree with my mother while yelling lyrics to Band-Aid frighteningly out of tune. Assembling the three different types of stuffing in the kitchen, shopping for Christmas crackers, and fairy lights to replace last year’s several broken sets. Last-minute gift purchases, dashing through local markets and calling in to visit relatives on the way in and out of town.

It’s all part of the rush, the chaos, and the bliss in the last week before Christmas that lets you know you are well and truly home. This is what you wait all year for. This is what makes it worth coming home.

Do you know someone coming home to Ireland for Christmas? Share this story with them and let us know in the comments section below.