IrishCentral Contributor David Hegarty shares the important lessons learned from his drum teacher as a youth in Ireland. 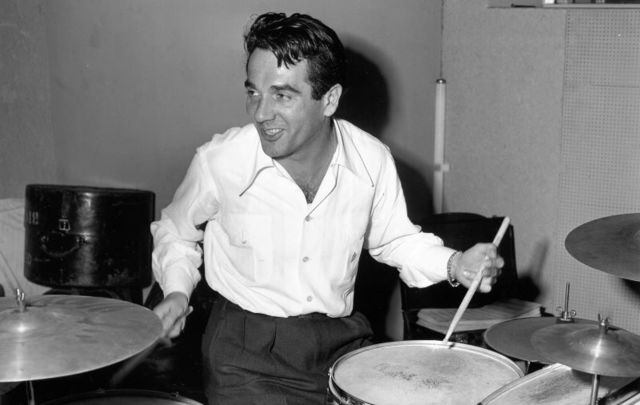 Gene Krupa on the drums, circa 1970. Getty Images

“The more I practise, the luckier I get”, a famous golfer is reported to have said.

I, and two of my friends, were introduced to the idea of practice at the age of thirteen. We’d gone to see the ‘Glenn Miller Story’, a biographical film of the eponymous bandleader of the ’30s and ’40s, who went missing in the Second World War. He was responsible for such enduring hit melodies as ‘American Patrol’, ‘In the Mood’, and ‘Moonlight Serenade’, among others.

In the movie, there is a scintillating, rhythmic, driving drum solo performed by the inimitable Gene Krupa, who caused the emergence of more drummers in the 1950s than any other thing whatever. My friends, Tom and Billy, a promising trombone player and a willing trumpet player respectively, practised, rehearsed and played with the local Confraternity Brass Band. All three of us left the cinema that evening, in a daze of musical ecstasy.

Inspired by the dazzling Krupa, I was the boy who would be drummer. More, as we walked down George’s Street that evening, I WAS Gene Krupa.

Over the next two days, I gathered an array of pots, saucepans, frying pans, wheel hubs, roundy glass ashtrays, and other assorted items, that contributed to the simulated drum set in the room at the top of our house. Anything that remotely resembled an instrument of percussion, was in immediate and permanent danger of misappropriation. Two broken off dowel rods, acquired from the cot of my two year old cousin while I served on babysitting duty, became my drumsticks.

And so, after three solid weeks of musical mayhem, percussive pandemonium, and an endless stream of complaining neighbours, culminating in a visit from Garda Sergeant Canning, my poor, bewildered and overwhelmed mother invested in a rubber practice pad, and a pair of drum sticks with which I could beat the unfortunate item. Peace descended on the neighbourhood. But it didn’t end there.

In the rush for progress, I now inflicted my youthful enthusiasms on Mr. Jack Roche, a highly respected and admired percussionist in my town. Mr. Roche laid down his conditions; he would teach, I would practise. We agreed this, and we both fulfilled our undertaking beyond what the other expected.

After six weeks, I was considered earnest enough to be invited to watch and to listen at a rehearsal of the eleven-piece dance band in which Mr. Roche played. To my amazement, all eleven musicians were reading and playing from written charts. Including Mr. Roche! Heresy! Treachery! Betrayal!

Up to that moment, I had thought of drummers as seated acrobats, gum-chewing, elbow-flailing, demonic maniacs, terrorising the band into performance, spurring the unsuspecting audiences on the dance floors to an uninsurable, limb-swinging, hysteria that we called jiving. And there he was, Mr. Roche, cool as a cucumber, sat sedately behind the drums, relaxed, at ease, looking for all the world as if he was enjoying himself, and driving the band in a steady, meticulously timed, swinging, metronomic, beat.

As I watched and listened, through the up-tempo quick steps, the moderated fox-trots, the Latin sambas, the rhythmic rhumbas, the wonderful waltzes, my life was transformed. The precision, the apparent ease, the resulting ensemble of the months, years, decades, of individual practice and application, was a revelation. In that one evening, new horizons opened up. The value, the possible rewards, of diligent, persistent practice, in ANY undertaking, were imprinted on my young and hungry mind.

That evening was a milestone in my life. Out went Krupa, the dazzle, the flamboyance. In came Mr. Roche. JACK was the man. And for the next 10-12 years, my goal in music was to play as well as Jack. I don’t think I ever did. But on the way, through the Trad Jazz and Blues Bands, and occasional Ceili gigs, I had a great time trying. And of course, the principle of practice spilled over into other areas of life.

Most of life’s skills are just that; skills. So they have fundamentals, which can be learned, practised, and developed. And to my mind, that goes for anything. So, if you learn, practise and develop yourself, and your chosen skill, there’s a very good chance that you’ll get competent, maybe good, perhaps even very good, at it. And therein, lies the power of practice.