How Irish immigrant history is helping to shape one man in the Laurentians understanding of coronavirus. 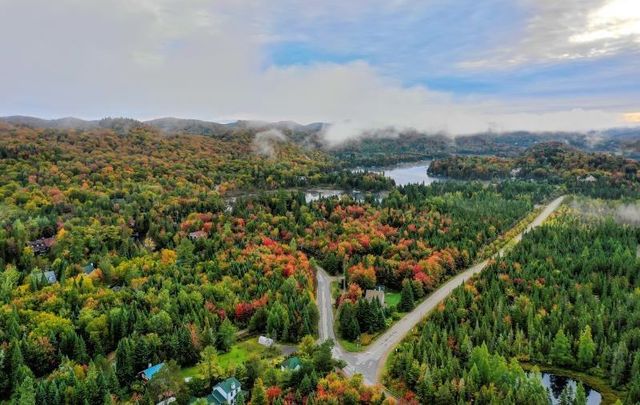 An aerial view of Laurentians in Canada, just north of Montreal. Getty Images

I live in a small French-Canadian community nestled in the Laurentians north of Montréal. There is a tiny percentage of the population, including myself, who can claim ancestors and family from Ireland or Scotland, and a few from Brittany.

When I talk to my friends here, who are now mostly under self-imposed isolation, out of fear or prudence due to the Covid-19 virus, our discussions often turn to what each of us is doing to pass the time, hibernating in our artificial caves. All St.Patrick's Day festivities were canceled and any public gatherings including Sunday Mass and celebrations are now prohibited.

One of the areas many people ask me about is what I like to do for entertainment. Inevitably, I bring up the vast plethora of Celtic music and dance, stories, histories and documentaries, television, films, and interviews that are now freely available on the internet. Many are interested in the music and dance which I happily provide links for, some want to know more about Ireland and its history and some, with a more morbid bent, want to delve deeper into the Famine stories and visuals.

There is a certain love-hate relationship with the Irish and Scots Canadians who lived and still live in Montréal and a few areas of the Laurentians. We still have towns named after Irish, British or Scottish places, such as Gore, Grenville, Brownsburg-Chatham, and Doncaster. The French Canadians were very generous and accepting of the Famine victims emigrating to Montréal and the thousands of orphans who were left alone after their parents perished during the crossing or shortly after arriving at Gros-Iles. Many were adopted by French Canadian families who preserved these children's' family names and raised them as Catholics. We now have many French-Canadian families named Ryan, O'Neil, Arthur, Murray, Chisholm, McCallum, etc. It is estimated that up to 5.5% of Québec have some family connection to Celtic ancestors, based on surveys done as recently as 2006.

When people ask me about the Irish experience of plagues, I usually mention that the Irish have, like many insular peoples, experienced epidemics but that, in particular, the Gros Isles immigrants suffered through major typhus and cholera outbreaks and that about 5000 people died between 1846 and1849 out of approximately 100,000, most of whom arrived during the ¨black year¨ of 1847. The Celts are no strangers to devastating national events either natural or imposed by foreign power.

One of the unexpected but welcome aspects of this pandemic is that it brings isolated people closer together despite cultural and language differences. The other is that spirituality (NOT religion) is beginning to take a front seat in many people's lives. People are questioning their values and especially those who choose to ignore public health warnings or hoard stocks that may be needed by the elderly. There is a growing sense of prioritizing how we live our daily lives, how we seem to be obsessed with material pursuits and how important our families are.

I recently read on the internet two articles by parents who were ¨forced¨ to deal with their kids, confined to home, because of school closures. Both finished by saying that after 1 hour trying to entertain and teach their kids, they supported the idea that teachers and school support staff should be paid a million dollars a year!

What we are seeing is a paradigm shift in social and ethical consciousness about others and ourselves. Watching places like Italy, Spain, Iran, and the US battle through this pandemic with thousands dying, especially the older generation, and the frailty of our current health care systems, but also the extraordinary dedication and self-sacrifice of our health care workers, has awoken a profound sense of our shared humanity, our profound community strengths, and our potential to work together to protect ourselves and the most vulnerable in every community. My sincerest prayers for everyone going through these trying times is that the road will always rise to meet you and the wind be always at your back!