Have you ever been fairy-struck by the ‘Strey’?

Have you heard of the ‘Strey’? If you are afflicted by the Strey you are not simply lost, you are hopelessly, endlessly lost. Your mind is fairy-struck into seeing something which isn't there. 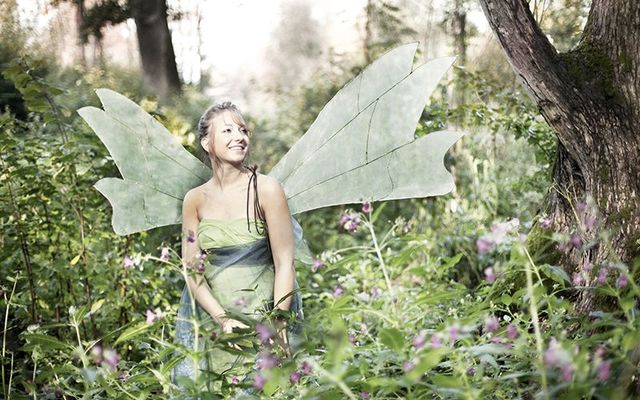 Fairies do not discriminate.

Have you heard of the ‘Strey’? If you are afflicted by the Strey you are not simply lost, you are hopelessly, endlessly lost. Your mind is fairy-struck into seeing something which isn't there.

Imagine you are out for a lovely walk, the sun is shining, the birds are singing. Ahead of you in the distance is a deep boggy lake, but in your eyes,  it appears a lush and inviting green field. What happens next? You confidently stride right into the field... and drown.

Or you might mistake a busy highway for a country lane and walk right down the middle of the road to the same end result. Not drowning that is, but death.

Read more:  Do you have a fairy in your family?

Did you know there is an old warning in rural Ireland that says: if you go for a walk, be sure to carry some stones in your pocket and if you begin to feel you are lost, throw the stones ahead on your path to ensure that, if you are afflicted by the 'Strey', you will not walk into a lake or river or step off a cliff.

And fairies do not discriminate, if they take a dislike to you, locals and visitors to Ireland are equally vulnerable to this fairy trick. A man from County Cork who has asked to be known as ‘Barry’, recently recalled an incident which occurred near his cottage in around 1992.

Well, now it must have been around 1991 or 1992. I remember you see as Mary Robinson was still new as President and the German had taken a shine to her.

This German man, don’t ask me his name for I have no chance of remembering that, it’s all I can do to remember my dinner these days, anyway this German fella came over to Cork for to recover from something or another. It was some sort of upset anyway he was trying to recuperate from. Why he chose Cork I do not know, but he did.

So, he rented the wee cottage down the way from my farm, some ways outside of Bantry town. I saw him from most days taking walks and we would pass the time, you know how it is. He was friendly enough. Not interested in taking in the tourist sites or anything like that, and he wasn’t a drinking man, not least in town but who knows what people do behind closed doors and it’s not for me to say.

He must have been here, in the valley just a few weeks. I’d see him walking two or three times a day, from the fields or my kitchen window you see.

Then this one day I see him rushing toward my house like a mad thing and it must have been around dusk then. Something had hold of him and no doubt. His clothes were sopping, and he grabbed at me talking the gibberish and wouldn’t let go of my arms.

So, I sat him down and got him speaking English and he said he had been out since morning walking. Walking and walking, he said he couldn’t stop and couldn’t find his way back.

He was hopelessly lost he said and every time he thought he figured the way out, he found himself back at the creek. And something told him his house was on the other side of the creek so he crossed it and so it went over and again.

He was in a feckin torment. Had been going on for hours and hours so he said.

Well, I gave it some thought and asked him, “Did you go near the old stones at all?” and he answered yes, he did.

And I told him I said “you don’t want to be going near those old stones. You’re after upsetting the Good Folk there”.

Well, of course, he had no idea of the Good Folk so I explained to him all I thought he needs knowing, it wasn’t much but enough. “They’ve only put the Strey on you,” says I to him, “They play tricks with your mind, get you lost and keep you lost. You can count yourself lucky they didn’t drown you in that creek”.

Well, his face fell deathly pale and he made me walk with him, back to his wee house. He packed his bags and left. Right then.

I walked with him to the road to Bantry and stood waiting with him until a car pulled up and gave him a ride. It was late and of that, I’m sure for I missed my dinner and the Late Late Show!

Never saw that German again, poor fella got such a fright. But it’s true you know, what I said, he was lucky to get away with only a dose of the Strey. It could have been worse, much worse. As told by ‘Barry’ – County Cork

I can’t help feeling a little sorry for that German man. He chose a quiet valley in beautiful County Cork to recover from some personal trauma, inadvertently offended the fairy and ended up fleeing Ireland in the middle of the night!

What could cause a fairy to put such a curse on a person just out for a walk? Barry was convinced it was because the German had gone near the ‘old stones’. I wonder if he could be referring to the Kealkill standing stone and stone circle a way north of Bantry.

Read more: Ever felt you have ‘lost’ time? You could have encountered fairies

It is possible the German damaged the stones somehow or took something from the sacred site which angered the fairy. It’s not surprising that fairy should act to protect the natural world, is it a stretch to believe they also defend ancient sites against a threat, perceived or real?

Maybe the German didn’t do anything wrong, perhaps there was something about him they disliked, or they simply felt like having some ‘fun’ at a Human's expense. He was simply in the wrong place, at the wrong time.

Striking a person with Strey is not in itself deadly, it is what the person could do in their confusion which could prove fatal. Luckily, on this occasion, the German found Barry and broke free from the Strey.

I guess we will never know why the fairy targeted the German man, but one thing we know for certain: next time you’re in Ireland, be sure to tread lightly. Be respectful to her land, creatures and of course, her sacred sites or you too might be fairy struck with the Strey.

Would you like to share your own story or a story from your family of a Faerie encounter or unexplained experience in Ireland? Drop by www.faerieofireland.com and share your story with Kitty.