For this expat Bostonian, US gun culture a hard sell in Ireland

With mass shootings in the United States now, sadly, a regular occurrence, defending the availability of military-grade weapons and America's right to bear arms becomes more and more difficult. 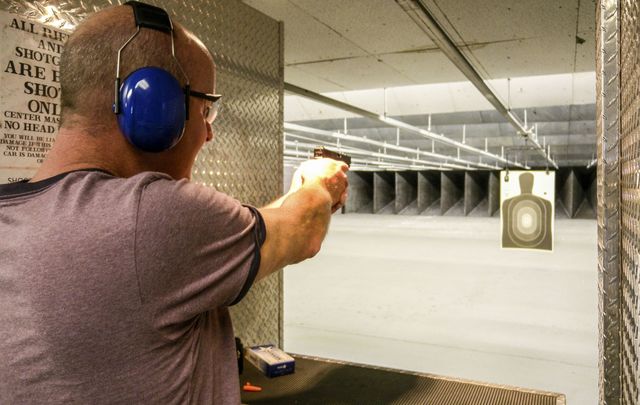 Right to bear arms? But what about the loss of innocent lives? It's hard to defend. Getty

With mass shootings in the United States now, sadly, a regular occurrence, defending the availability of military-grade weapons and America's right to bear arms becomes more and more difficult.

DUBLIN – In July 1992, I left Boston to take up residence in Dublin, imagining that I might one day morph into a passable Irishman. In my 20-plus years away, however, I’ve remained a staunch defender of American ideals and the US way of life.

It can be rough going at times.

As much as the Irish profess their love for America, I’m reminded – in quite smug and sarcastic tones on occasion – about our alarming insularity and colossal obesity problem, to name just two areas in which we fall short as a nation.

Even though the Irish have been mercilessly caricatured for years – by the Victorian press in Britain to “Family Guy” on Fox – they’re not averse to a bit of mindless stereotyping at other people’s expense.

One particular feature of American life is always harder to defend – and indeed even to explain – than others. And it's not the current occupant of the Oval Office President Donald J Trump, a serial charlatan who has rubbed the lantern of populist discontent and released a rather repugnant genie. (Much in the style of many nationalist leaders in Europe, it must be said.)

No, President Trump aside, for folks on this side of the water, there's an equally unfathomable aspect of American life. In Ireland and beyond, prevailing gun control measures in the US remain a hard sell, especially following a mass shooting at a school, nightclub, cinema, or hospital.

When news emerges – as it does with alarming regularity these days – that yet another aggrieved white male has turned a public space into a shooting range, Irish folks and indeed Europeans generally ask questions. Such as, why is it necessary for US citizens to have easy access to high-power firearms when our police forces and even many private security personnel are already so heavily armed? Or, is it not clear by now that a young man interested in buying army-grade weaponry, with multiple rounds of ammunition, might have some serious mental health issues that society ignores at its peril?

As security analyst and retired Irish Army captain Tom Clonan explained on RTE radio in the aftermath of the 2016 Pulse nightclub shooting, in Orlando, the semi-automatic AR-15 assault rifle often used in such attacks is a merciless weapon in a combat setting, capable of penetrating walls and hitting targets hundreds of yards away.

Plainly, then, not a weapon that belongs on America's streets or indeed in the home of any citizen, as Massachusetts Congressman Seth Moulton, a former active-duty Marine in Iraq, has also pointed out.

Certainly, personal liberty is a core American value honored around the world, but for many on this side of the pond, the wielding of such facile deadly force by individuals seems a far-fetched extension of this freedom.

(In case you’re wondering: There is gun violence in Ireland, but it is largely confined to the criminal underworld. Bitter personal disputes are usually settled with knives – which presents an appalling vista of its own.)

By now, you've probably deduced my own feelings here. On this issue, I happen to find myself in sympathy with my Irish friends and acquaintances. Having grown up in relatively gun-free Massachusetts (outside the usual criminal elements) could have something to do with this. Or maybe I’m getting soft after living for so long in a country where the police are unarmed and very few people want it otherwise.

On the other hand, it could be that restricting the circulation of certain types of guns is a valid social concern and that there is no plausible reason for an ordinary citizen to arm himself as adequately as any US infantry soldier.

America may have outgrown its Wild West past, but that isn’t how it’s seen on this side of the pond. When it comes to the availability of firearms, a certain stereotype prevails. We still come across as a country of impulsive, gun-obsessed cowboys – especially after a distressed individual opens fire in a public place with a legally acquired combat weapon at his disposal.

Read more: How we can put an end to the "Irish Car Bomb"