A chance encounter with a young alcoholic Irish speaker on the streets of Belfast reminds us that our actions in dealing with these social issues must be guided by respect and compassion. 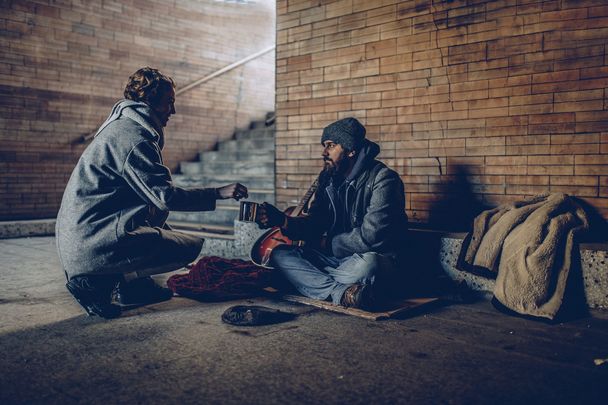 My pal Frank has been through the addiction mill so is more prone than me to stop to chat with the broken people sleeping rough or begging on the streets of Belfast. Thus we found ourselves — me who usually walks right by, eyes averted — and him, a shoulder to lean on, chatting to 23-year-old Rebecca on a busy South Belfast thoroughfare last week.

“Thanks for acknowledging me,” she said to big Frank, perhaps not fully understanding that he was going to give her the fifth degree — as well as a crisp fiver.

He always takes the same approach: “Come with me to an AA meeting”, no matter how unlikely a positive response might be.

Read more: Benefits of choosing to break an addiction

And, no, Rebecca wasn’t willing to go to a meeting of that life-saving club but she was only too happy to unburden herself, through the tears, of the harrowing story of her descent into alcoholism and life on the streets. That night, she said, she would sleep at the side of a building in the docks area where she knew a security camera was above her.

Rebecca was cheered by her audience. Despite having no front teeth, she has a warm and mischievous smile and enjoyed the craic with Frankie.

As we left, she shouted after me, the silent bystander to this encounter between two wounded people, one hurting, one healed, “what’s your name?”

“That’s Irish,” came the riposte from Rebecca. “I speak Irish, I went to an Irish school.”

Now that got my attention.

And so she did. Indeed, she was able to put several greetings and phrases from her primary school days together.

I spoke with her former principal later.

“She hadn’t a chance,” he told me, relating the story of her troubled youth.

Frank saw Rebecca the next day as well at her spot outside the railway station. They’re now pals – or as good as.

“She doesn’t choose to be on the streets,” he said, “but I told her straight, it only gets worse.”

He knows that of which he speaks.

And, of course, Frank could just as well be speaking about the new wave of drug-fuelled desolation and dereliction sweeping Belfast — which is evidenced by rough-sleepers not just in the city center but in other areas of the city as well.
The causes are legend: hopeless mental health services, trauma from our painful past, an assault on the welfare safety net, the ready availability of cheap and powerful drugs and much more besides.

The challenge now is what we do about this crisis. Acknowledgment is the first step — Rebecca got that right — but failure to act decisively and dramatically will mean, as Frank warns, this will only get worse.

And our actions must also be guided by respect and compassion.

I love the advice which the Mayor of Boston Marty Walsh, a recovering alcoholic, gives to volunteers helping out with the city’s annual winter census of rough-sleepers:

“Treat that person with respect, you could be speaking with the next mayor of Boston.”

That’s the scale of the respect Rebecca deserves.

Read more: Irish mother's desperate battle to save her daughter from opioid addiction