Should President Trump's June visit to Ireland be banned due to hate speech?

Holocaust denier and fundamentalist American preacher Pastor Steven Anderson was due to speak in Dublin on May 26 but has now become the first person banned from Ireland. Should President Trump follow? 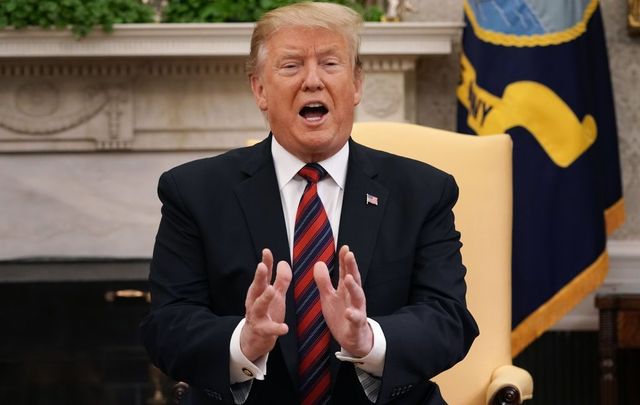 Should Donald Trump be banned from Ireland for hate speech? Getty

An American Baptist pastor has been banned by Ireland’s government because of hate speech but could a parallel be drawn between Steven L Anderson's anti-LGBT, Holocaust-denying opinions and the birther, anti-immigrant words of President Trump?

US Pastor Steven L Anderson has become the first person to be banned from Ireland for national security reasons under the 1999 Immigration Act.

The Holocaust denier and fundamentalist American preacher was due to speak in Dublin on May 26 but is now banned from traveling to Ireland by the Irish government after several petitions called attention to his visit.

Yet many would class the words of US President Donald Trump—his continued reluctance to accept that President Obama was born in the US, describing Mexicans as rapists, his earnest calls for the death penalty for the now proven innocent Central Park Five, his aim to shut Muslims out of the US, and his retweeting of white nationalists without apology—as a similar kind of hate speech.

From calling white supremacists "very fine people" to having David Duke the leader of the Ku Klux Klan endorse him, President Trump may not be the kind of friend Ireland wants to have or the kind of visitor we want to bring to our shores.

Just last week he laughed when a follower said immigrants trying to enter the US should be shot.

An 'extremely credible source' has called my office and told me that @BarackObama's birth certificate is a fraud.

So with Trump set to visit Ireland this June, should he also be banned from the country?

The banned Pastor Anderson, who applauded the Orlando massacre by saying that there were now "50 less pedophiles in this world," had already been banned from the 26 EU countries in the Schengen Area, which does not include Ireland.

Based in Tempe in Arizona, Anderson, 38, "holds no college degree but has well over 140 chapters of the (King James) Bible memorized word-for-word, including approximately half of the New Testament.”

Ireland’s Minister for Justice Charlie Flanagan signed the exclusion order ahead of Anderson's Irish trip, where he planned to give a public sermon.

In a statement, Minister Flanagan said, “I have signed the exclusion order under my executive powers in the interests of public policy.”

The action was taken under Ireland’s 1999 Immigration Act. The act allows the minister to bar someone from the Irish state if they consider it “necessary in the interests of national security or public policy.”

Read more: “Face” it: Trump has a point over freedom of speech

Do you think President Trump deserves a ban from Ireland for hate speech? Have your say in our poll below and be sure to tell us why you voted:

Have further comments? Be sure to leave your thoughts for us in the comments section, below.