Did Irish government do secret deal with US vulture fund for discounted NAMA properties?

NAMA Land is a shocking story of how the sale of public assets conspired to disinherit the Irish people and enrich a new local elite. 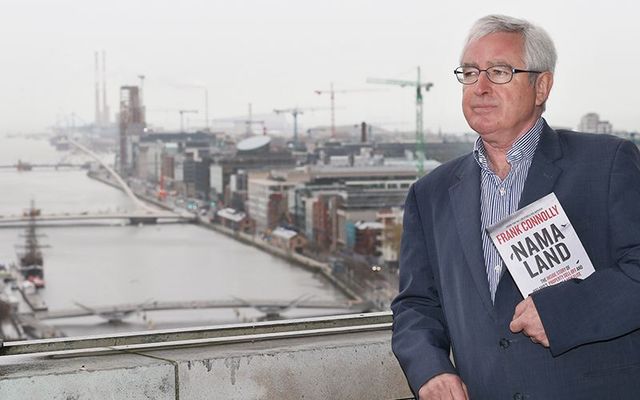 The scandal over the sale of its Northern Ireland portfolio of assets, known as Project Eagle, by the National Asset Management Agency (NAMA) to US vulture fund Cerberus in 2014 continues to unfold and has damaged the reputations of leading politicians and business figures on both sides of the Irish border.

It is the subject of an inquiry in Dublin by a Commission of Investigation headed by a High Court judge, and by the National Crime Agency in Britain, the Securities and Exchange Commission (SEC) and the Federal Bureau of Investigation (FBI) in the US, while many other aspects of NAMA operations have also come under scrutiny.

Over the last few years the largest transfer of property assets from public ownership to private interests in recent times has taken place in Ireland. A total of €31.8 billion [$37.5 billion] in distressed loans – with an original par value of €74 billion [$87 billion] – transferred to NAMA following the banking collapse and have been sold in large bundles which only a handful of global funds can afford.

In this our second extract from his recently released best-selling book “NAMA-land,” investigative journalist Frank Connolly, reveals some extraordinary details concerning secret meeting between Irish government and the US vulture fund.

Here, Frank Connolly looks at a controversial meeting between Irish finance minister, Michael Noonan, and former US treasury secretary John Snow by then a Cerberus executive, in March 2014, just before bidding closed on the sale.

The long-anticipated PAC report was produced in mid-March 2017, and it largely vindicated the earlier value for money analysis of the Comptroller and Auditor General (C&AG). The PAC determined that the meeting between the finance minister and the lead bidder on the day before the Project Eagle bidding closed was inappropriate and called on the government to set up a commission of inquiry into the loan sale.

An arguably more serious criticism of Noonan was his failure to inform the committee during his five hours of evidence on 6 October 2016 about his meeting with the Cerberus executives, including former US treasury secretary John Snow, in late March 2014. 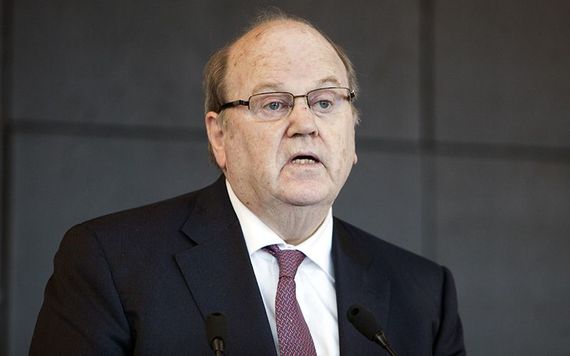 While the PAC was informed in correspondence sent by the finance department after the public hearings of the committee, its members were incensed that the information was not provided during his evidence when it could have been subjected to more forensic cross-examination.

When the department did provide details of the meeting to the committee it confirmed Noonan’s attendance along with Ann Nolan, the second secretary of the department; Neil Ryan, assistant secretary; and Ryan’s advisor, Eoin Dorgan. Cerberus chairman John Snow was accompanied by company executives Liam Strong, CEO of Cerberus European Capital Advisors, and managing director Billy Cooper; and one of Ireland’s better known corporate figures, former managing partner at KPMG, Ron Bolger. Bolger was also former chairman of Telecom Éireann, former vice chairman of EBS building society and vice-chairman of one of Ireland largest waste operators, Greenstar, which Cerberus purchased just weeks before the high-level meeting with Noonan. Bolger had worked as a consultant for Cerberus since 2009, according to the briefing notes, an indication of how long the US investor had been interested in acquisitions and commercial activities in Ireland.

The briefing notes mentioned the Greenstar purchase as a topic likely to come up in the discussion and stated that ‘the firm is also known to have some interest in NAMA’s Project Eagle’. The note stated that ‘this project, being run by Lazard, is for the €4 billion Northern Ireland Irish portfolio and was prompted by a reverse inquiry from PIMCO in late December 2013’. (A reverse inquiry is where the potential purchaser approaches NAMA in advance of a portfolio going out to tender by the agency.)

Instead, Ann Nolan went along, while neither Carville nor Moran was present. An email discovered to the committee following the hearings made another mention of John Snow, who was planning to travel to Ireland almost a year later in March 2015, for a courtesy visit with Noonan and for meetings with the first and deputy first minister and the finance minister in the North.

In an email to Alex Lalor of the Department of Finance, NAMA chairman Frank Daly wrote on 25 February 2015 that he was due to meet Snow and that while here the former US treasury secretary would like ‘to pay courtesy calls on Minister Noonan in Dublin’ as well as to the North. In what was surely an overly optimistic note, Daly wrote that NAMA had sold the Northern Ireland portfolio ‘to Cerberus last year’ and that ‘as far as I’m aware there are no issues around the Northern Ireland portfolio – the transition has gone very well – so the proposed calls are in the nature of courtesy ones. Cerberus remains interested in the Irish market and continues to do business here.’

At the time, in late February 2015, the dogs in the business streets in Belfast were loudly barking about the fee arrangements associated with the sale, the offshore account containing £7 million, and the resignation of Ian Coulter from Tughans solicitors, a leading firm in the city.

The PAC report comprehensively recorded all the details surrounding the history of Project Eagle and made scathing criticisms of the manner in which NAMA organized the sale process, applying an incorrect discount and ignoring blatant conflicts of interest along the way. The committee said that Noonan’s meeting with Snow and the Cerberus team could have given the perception that the US fund was benefiting from preferential treatment and said that the deal it obtained resulted in a possible loss to NAMA of €800 million on its Northern Ireland loans. It found that the sales strategy was ‘seriously deficient’ and that there was a failure of corporate governance by NAMA in not removing Frank Cushnahan from the agency’s Northern Ireland Advisory Committee after he declared that he was advising debtors comprising over 50 per cent of the value of the loan book.

NAMA rejected the findings of the PAC report, including its 42 recommendations.

Asked whether McDonagh or Frank Daly might consider their positions following the committee’s criticisms of the agency, a spokesman for NAMA said: ‘The issue does not arise. NAMA considers that it acted appropriately in the conduct of this transaction.’

If some of the exchanges during the hearings and following the publication of the report were bruising, they were nothing to the one in the Oireachtas restaurant in Leinster House, soon before its release, between Noonan and committee chairman Sean Fleming. 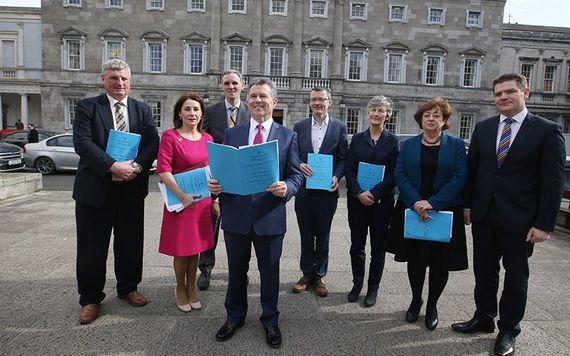 March 2017: Chair Sean Fleming surrounded by members of the Public Accounts Committee at the launch of the report on sale of Project Eagle.

According to the Fianna Fáil TD, Noonan had threatened to take legal action and injunct the report if it included criticism of his actions, or inactions, in relation to the Project Eagle sale, a confrontation which some committee members believed was a deliberate effort to interfere politically with its work and role as an independent watchdog of the Oireachtas. Most committee members knew nothing about the restaurant row until it emerged during the Dáil debate on the report on 29 March 2017 when confrontation between the minister and the chairman led to some harsh comments across the floor of the House.

Noonan opened proceedings with a strong defense of his own actions and revealed that he had written to Fleming before the report was published to object to a finding against him or his officials: ‘I remain shocked that the Committee of Public Accounts disregarded due process and did not offer me or my officials the opportunity to discuss the committee’s concerns even after I requested such an opportunity prior to the report’s finalization.’

Noonan argued that the minutes of his meeting with Cerberus were ‘available on the Department of Finance website. It is there to read for all who are interested,’ and argued that it was entirely appropriate for him to meet ‘the chairman of a major international investment fund, a former US Secretary of the Treasury, at his request, while he was in Dublin on business’.

Fleming singled out the fact that Noonan had not revealed his meeting with Cerberus on the eve of its bid during the minister’s five-hour appearance at the PAC.

‘It is a little bit rich of the Minister to complain that we did not ask him about something when he was the only person in the room who knew about that meeting on that particular occasion.’ 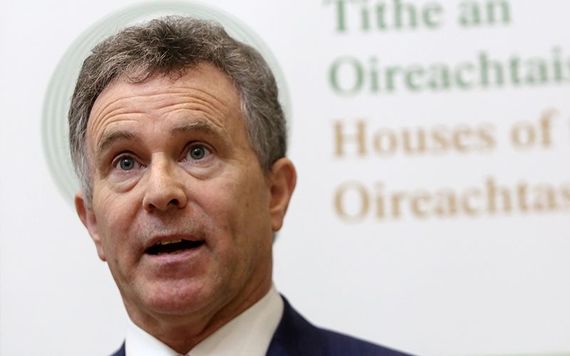 Then Fleming pulled a smoking gun from his pocket in relation to the letter sent to the PAC in February and his meeting later that evening, on the day it was received, in the Oireachtas restaurant:

‘The Minister sent that letter to the committee on 15 February 2017. I went into the Oireachtas (Parliament) restaurant that evening and the Minister asked me to come over to have a chat with him. He told me that I was unfair to him by not inviting him to the committee. I told him he was unfair to the committee by keeping the information for five hours. He concluded the conversation by saying that he can injunct me. Shame on the Minister for Finance for wanting to injunct the Committee of Public Accounts for doing its job. I wrote it down. He said to me, “I can injunct you”.’

Fleming told the minister he was ‘unfit for office’, to which Noonan replied that the Fianna Fáil deputy was a ‘disgrace’ and called for him to resign as PAC chair.

Mary Lou McDonald of Sinn Fein said it was news to her that Noonan had threatened to injunct the PAC and that in his contribution to the Dáil debate he had all but ignored the report of the committee, which had sat on 11 occasions, heard 57 hours of oral evidence, studied some 3,000 pages of written evidence and vindicated the C&AG.

Read more: Gerry Adams made history, but Sinn Fein have only begun

* NAMA-Land: The Inside Story of Ireland’s Property Sell-off and The Creation of a New Elite is available on Amazon here.