NAMA-land is a shocking story of how the sale of public assets conspired to disinherit the Irish people and enrich a new local elite. 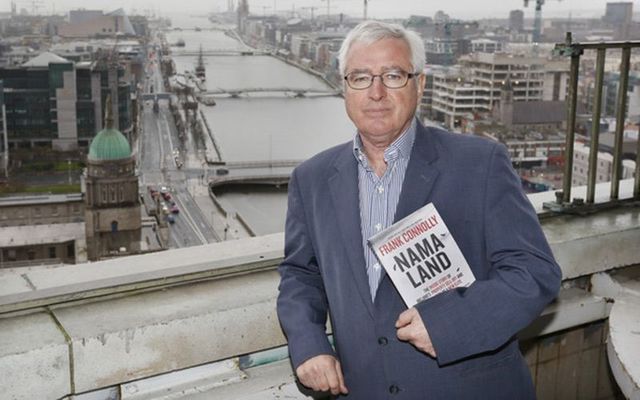 NAMA-land is a shocking story of how the sale of public assets conspired to disinherit the Irish people and enrich a new local elite.

The scandal over the sale of its Northern Ireland portfolio of assets, known as Project Eagle, by the National Asset Management Agency (NAMA) to US fund Cerberus in 2014 continues to unfold and has damaged the reputations of leading politicians and business figures on both sides of the Irish border.

It is the subject of an inquiry in Dublin by a Commission of Investigation headed by a High Court judge, and by the National Crime Agency in Britain, the SEC and the FBI in the US, while many other aspects of NAMA operations have also come under scrutiny.

Over the last few years the largest transfer of property assets from public ownership to private interests in recent times has taken place in Ireland. A total of €31.8 billion [$37.5 billion] in distressed loans – with an original par value of €74 billion [$87 billion] – transferred to NAMA following the banking collapse and have been sold in large bundles which only a handful of global funds can afford.

In this extract from his recently released book “NAMA-land,” investigative journalist Frank Connolly, reveals some extraordinary details concerning some of those involved in the Project Eagle controversy

.....Also engaged in battle with Cerberus was bookmaker Gareth Graham, whose property loans had been taken over by the US fund as part of its Project Eagle purchase. He was soon followed down the legal route by County Down developer John Miskelly, who challenged the seizure of his assets by Promontoria Eagle (a Cerberus subsidiary), which in early 2015 had taken over his Ten Square hotel in Belfast and six other properties he owned.

It then appointed receivers over Miskelly’s company Applecroft Investments, which owed in excess of £80 million [£105 million] to lenders. Miskelly, who once sought to form a consortium to take over Liverpool FC in Britain during the boom years, was not someone to take matters lying down, despite his suffering a debilitating illness at the time.

Graham and Miskelly shared an absolute distrust of Frank Cushnahan, an advisor to NAMA about its Northern portfolio who was considered close to the US bank seeking to buy the loan book, with whom they both had dealings over previous years.

Graham had forced the consultant out of his business back in 2008 after he discovered that Cushnahan was seeking to sell off lucrative aspects of the bookmaker’s operation and was making life difficult for his elderly mother when she objected to his plans.

Miskelly had contracted Cushnahan to help him out of his financial difficulties after his loans were transferred to NAMA but had been careful to make tape recordings of their conversations.

Graham, in a remarkable development that resonated across three jurisdictions, discovered during the summer of 2015 that he was also sitting on taped evidence concerning Cushnahan’s dealings with several prominent politicians and business people in the North when he worked out of the bookmaker’s offices in Belfast city centre up to 2008.

Under regulations, bookmakers are obliged to independently verify every bet made by telephone and the Grahams complied with this requirement by recording all calls into and out of the firm’s head office in Belfast, where all phone bets were received. Cushnahan was aware of this requirement as he had written the staff handbook informing all employees of the taping procedure. For some reason, which the Grahams put down to arrogance, Cushnahan appeared to believe that he was somehow immune to having his calls monitored in this fashion.

Graham discovered that he had dozens of tapes which recorded hundreds of hours of conversations Cushnahan had with people during the years he worked at the business. The tapes helped to identify the circle of business and political associates Cushnahan had nurtured and who would later emerge as key players during his time as a member of the NIAC and in the Project Eagle saga.

Because of his association with NAMA through his membership of NIAC, the agency’s Northern Ireland Advisory Committee, Cushnahan was in a position where he claimed he could influence the fortunes of those developers, including his clients, who were now under the control of Cerberus.

Given their falling out, he certainly could not be relied upon to assist the bookmakers through their difficulties, and Graham feared that he would be one of the ‘bodies on the street’ left after the massive disposal of distressed loans in the North was complete.

When he listened to conversations on the hours of tape recordings, he was more than convinced that Cushnahan was well-prepared to use every trick in the book to gain advantage for those interests he favored, including the leading political and business associates and senior Stormont officials with whom he had frequent contact while working for the Grahams.

Read more: The man who is buying up Ireland - $225 million invested so far

Graham handed over the sensitive and explosive recordings to Niall Murphy of KRW Law LLP and from there they engaged with the NCA/PSNI investigators and with the SEC and FBI in the US to assist with their inquiries into the Project Eagle deal.

The information uncovered ranged from Cushnahan’s secret dealings with others in relation to the disposal of the more lucrative properties in the Graham business to discussions with members of the DUP on how to reorganise constituency boundaries in order to maximise the party’s vote in forthcoming electoral contests.

There were also unkind references to other political and business figures, including to the director of governance who worked in the office of the powerful New York State Comptroller. Irish American Pat Doherty was seeking to direct pension and other public funds under his control to assist poorer parts of the North as part of US input to the fragile peace process following the IRA ceasefires.

Cushnahan had made unsuccessful efforts to set up a fund intended to attract US investment in the North, including the New York pension monies. He was displeased with Doherty’s connection with Sinn Féin and other nationalist and republican supporters who were promoting an Emerald Fund for the purpose of supporting the peace process with investment by Irish American and other US financiers.

Extensive discussions he had with Brendan McGinn, among others, were taped and revealed deep suspicions and dislike felt by Cushnahan towards his perceived political and business opponents. Cushnahan and McGinn were promoting a fund they called New Ireland Capital Partners, which was seeking to raise $250 million for projects in the North and was in competition with the Emerald Fund for the support of Irish American and other US investment. In one of the many conversations at Graham’s bookmakers preserved on tape, they discussed a forthcoming visit to the US by senior politicians and civil servants from the North.

On the tape recorded on September 2, 2008, Cushnahan asked McGinn to meet with John McMillen, a senior civil servant in the Office of the First and Deputy First Minister. McMillen had a supervisory role in the Washington-based Northern Ireland Bureau and worked directly for Bruce Robinson, the head of the civil service in the North (with whom Cushnahan also enjoyed good relations). The bureau was the official representative of the government of Northern Ireland in the US. Cushnahan described speaking to McMillen about Lorraine Turner, the head of the bureau’s New York office. He suggested she “may have an agenda of her own” which, he said, “may not be best for Northern Ireland from time to time.” He then referred to Pat Doherty and his “green gold collar scheme, which goes the wrong way from time to time.”

McGinn replied that Doherty’s scheme (the Emerald Fund) goes past “little green people on the streets.” Cushnahan then said, “No, sure I know that, sure I said to him [McMillen], he [Doherty] might have been out with a Kalashnikov from time to time, if he was let loose.” McGinn then referred to Doherty’s “linkages with the paper guy, O’Muilleoir.” At the time, Máirtín Ó Muilleoir was publisher of the Andersonstown News, a popular newspaper in nationalist areas of Belfast. As they ended the conversation, Cushnahan said that McMillen had agreed to meet with him and McGinn, possibly that evening. He explained that McMillen had “taken my advice in a variety of other things, between you and me, a pile of things.”

“The issue, Brendan, we have to get across to John, is basically, what is the message that has to come down the pipe, which is conducive,” Cushnahan said before he was interrupted by another call. When they resumed their conversation, McGinn refers to Doherty as a “major blockage.”

McGinn also described how he was hoping to attract support from “the crème de la crème of the business community” in the US. Cushnahan considered the meeting with McMillen urgent because McMillen was due to travel to the US in the near future as part of the trade delegation and Cushnahan wanted McGinn to travel to the US at the same time. Cushnahan said, “He will be going out there [to the US]. You try to make sure that your plans fit in and then make sure that you can wheel him into some of the people you know.”

The treatment by Cerberus of the Graham and Miskelly loan books were in stark contrast to those of other developers, including Paddy Kearney of Kilmona, who it was reported got close to a £250 million [$295 million] debt write-off from the US fund. Lagan and MAR Properties were also getting their loans refinanced at a rapid rate. Lagan, controlled by Kevin and Michael Lagan, and MAR, owned by Noel Murphy, had their loans refinanced by Jefferies LoanCore, the joint venture of New York-based Jefferies Bank and Singapore state-owned property investor GIC Real Estate.

Frank Connolly is one of Ireland's most distinguished investigative journalists and the author of the acclaimed bestseller "Tom Gilmartin: The Man Who Brought Down a Taoiseach." He is currently Head of Communications at SIPTU. He is a regular contributor to print and broadcast media. He lives in Dublin.

His latest book "NAMA-land" can be purchased here.