"Whether from Cork or Port au Prince, desperate refugees should never be dehumanized. Nothing good is ever going to come of that." 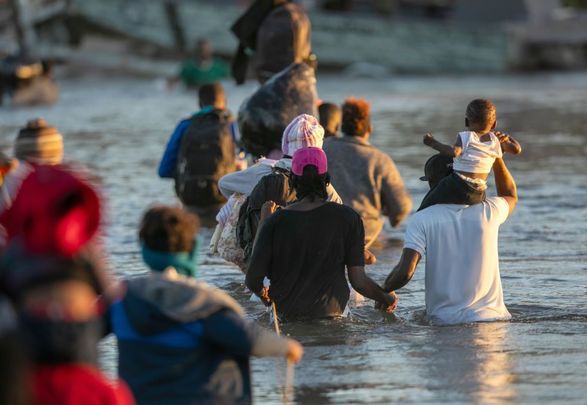 It's difficult to look at the images of those desperate refugees living under a bridge and not think of those who fled past disasters in Ireland or Russia or elsewhere across the globe. Difficult. But not impossible.

This is partially because there are some people who just get a kick out of exploiting the misery of others.

"This is a disaster, and it is a man-made disaster," Republican Senator Ted Cruz said, presumably because the phrase “Democrat-made” disaster was a bit clunky.

"When you have open borders, this is what you get,” Cruz added.

One suspects that if the borders were actually “open,” these refugees would not have chosen to stop and take in the sights of Del Rio, Texas.  In many photos I saw, there was a fence impeding their journey on to the promised land of America.

But I get Cruz’s point.

He’s a horrible person and fear-mongering demagogue. Which does not mean he is entirely wrong.

Imagine a person -- outdoors -- whose anti-Covid mask might have slipped under their nose just a little bit. They are still likely to get a lecture from certain folks about safety and vaccines and the lecturer’s right to remain healthy.  Fair enough.

Yet at the mere suggestion that the U.S. regulate its borders, at the very utterance of the possibility that some of the folks at the border born in Haiti or Guatemala might indeed be carrying Covid -- a possibility mentioned a thousand times this past weekend on Fox News -- you are likely to get a lecture that ends with you as a bigot.

Perhaps because, to certain other folks, the anti-vaccine redneck is merely exercising his Constitutional rights. While the diligent, masked, and perhaps even negative-tested immigrant is still a threat to America's very existence.

These are the folks who cheered on the revolutionaries of January 6th, and who now believe those wingnuts are actually “political prisoners.”

Sure. So is Robert Durst.

We are at a point in this country where we are discussing life-and-death matters as if they are professional wrestling matches. There are good guys and villains, heroes and heavies. And that’s all we can handle.

There are some protesters who take to the streets because their cause is urgent and necessary, and other protesters who are reckless and super spreaders.

You’ve just got to say what the folks are protesting. So that we can figure out if the protest is either urgent or dangerous.

Which kind of misses the point of protesting.

For the record, on January 1, 1892, a girl from Cork named Annie Moore was the first immigrant processed through Ellis Island. After the pageantry and celebration she went off to live at 31 Monroe Street, on Manhattan’s Lower East Side, with her parents and brothers.

A few weeks later, a couple of hundred immigrants, having survived murderous anti-Jewish pogroms in Russia, also made their way through Ellis Island. Several of them then settled right across the street from the Moores, on Monroe Street.

Days later came the police, doctors and nurses. The ship upon which these poor immigrants had escaped persecution also carried cholera.

Hundreds of passengers had fanned out across New York City and the rest of the country.  As you can imagine, the anti-Semites of the day were none too pleased.

But you can also understand why Annie Moore and her family across the street also might be concerned.

These things happened back in the glorious old days when America was great.

Whether from Cork or Port au Prince, desperate refugees should never be dehumanized. Nothing good is ever going to come of that.

At the same time, if cholera or Covid is a serious problem -- and we can safely say they are -- then they are serious problems whether spread by a MAGA-merican or an immigrant.

Even if you can’t bring yourself to say one or the other.

In that sense, we are all kind of becoming political prisoners.