Christmas greetings above the madness, let’s enjoy it while we can

Let's have a bit of old-fashioned craic while we are still alive and able to survive the surrealities of a Yuletide season. 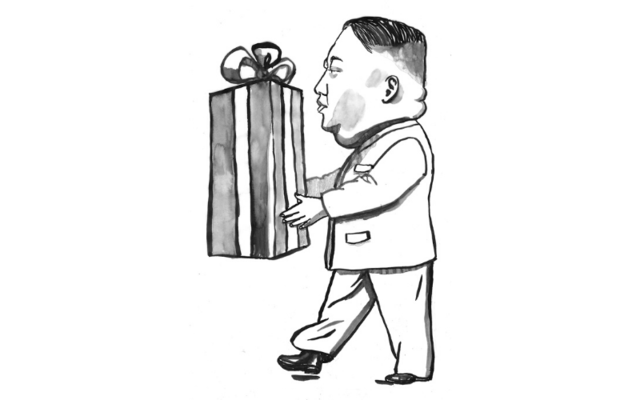 Let's have a bit of old-fashioned craic while we are still alive and able to survive the surrealities of a Yuletide season which, according to many gloomy reports emerging on this coast of the Wild Atlantic Way by the hour and minute, could well prove to be our last in this dimension.

That plump little man in North Korea is threatening to send a special Christmas Box to ye that ye will never forget, we are in the dark after being battered by a spectacular winter storm that made us afraid to open our doors, volcanoes are exploding all over the place, Australia is on fire from end to end, John Bull’s strange politicians across the Irish Sea will be led by Boris Johnson for the next five years, our Celtic cousins over in Scotland are organizing themselves for independence shortly, there is some major fuss around your White House which I can’t fathom out at all but which, apparently, has something to do with the popularity of peaches.

Your Joe Biden says he is Irish but not stupid despite that genetic reality, Russia has been banned from taking part in the next Olympics and the World Cup of soccer over alleged shortcomings related to drug tests, all of our best traditional old country pubs down the side roads of the Emerald Isle are empty because we are fearful of driving along any of our roads because of the stiffest driving regulations in Europe, our hospitals are so crammed with patients awaiting urgent treatments that they have to be stacked up for days on end on trolleys lining the corridors, we have been warned that another economic recession is due any day now, and, believe it or not, we will shortly be thrown into jail or deported if we go out into our precious bogs and cut a few loads of turf to brighten up the ancient hearths of home.

Meantime we are being encouraged to import more and more oil from our dear friends in Saudi Arabia because it produces less toxicity into our atmosphere than any form of turf or peat. And our decent farmers are getting so angry at being expected to sell their cattle for less than it costs to raise them that they are blockading the distribution centers owned by the meat industry barons.

Yes, as always in the past, all the indications are that we will rise above all the challenges in Irish style and enjoy and relish a very merry Christmas indeed.  Happy Christmas to you all, wherever you may spend it out there in our celebrated diaspora.

Myself and the lovely Annet, as a matter of slight interest to some of you regulars, are heading over to her native Netherlands for a few days at the peak of the season, in the certain knowledge that, despite climatic changes globally, the Dutch are masterful at building dikes and dams against all weathers.

I propose to enjoy every minute of the break, and maybe it won’t exactly be Knock water in the bottle in my fist either for her family members over there!  I’ll take my chances on that just as surely as, when I get back home, I will once again sit comfortably in front of a lovely turf fire, aromatic and traditional and wafting all my childhood memories around the room in Killaloe.

And, sure, when we get back home again after the three-day break the Killaloe species of Christmas, and that across the bridge over the Shannon into Ballina in Tipperary, a few minutes walk away, will only be starting to liven up properly.  That’s the plan anyway provided no volcanoes erupt or dikes burst open in The Netherlands in the meantime.

Incidentally, if any of you noble readers have family connections with airport security officers tell them to wave myself and my wife and my bottles of Knock water through without any bother or fuss at all.  I’ll do as much for you in the near future.

Incidentally, the best Knock water I’ve ever tasted in my long lifetime is magicked high up in the Tipperary hills above Ballina and has no connection with the Mayo pilgrimage town.

Christmas, surely, and on a slightly more serious frequency, is a family time above all else.  We elders are always delighted to meet up again with the fledglings that flew out of the nest in their time and season and went away out there into the wide world on their own journeys.

And, again on a family note to conclude, with a Christmas story attached, I had a great night out on the town before the storm struck with my oldest son Cuan and he surprised me several times during the evening.  Firstly because he told me he is now 46 years old, and secondly when he showed me a photograph of his maternal great-grandmother Nora Conlon from Ennistymon.

Her story, from West Clare’s yesterdays, was that she was raised in the hills above Ennistymon before meeting and marrying her lowlands farmer Conlon. And she did not have a word of English in her head until that marriage because she was raised in the fluent Irish tongue of the people back then in the 19th century. She was discovered in her later years by a folklorist from Dublin who recorded her stories and tales of the small Gaeltacht in which she was raised.

I’ve always been pleased and proud that my third son Dara and his Donegal wife Aine are raising their Connemara children through Irish today in a different world, and there was a heartwarming feeling looking at the photo of the old matron, The apple, they have always said, does not fall far from the tree.

Happy Christmas to all of you out there, stay safe and warm and for God’s sake avoid volcanoes and whatever Christmas presents the portly little man from North Korea has promised to deliver before the New Year.

Read more: The last miles on the road home for Christmas are always the best