Cahir O'Doherty reflects on returning to his native Co Donegal at Christmastime. 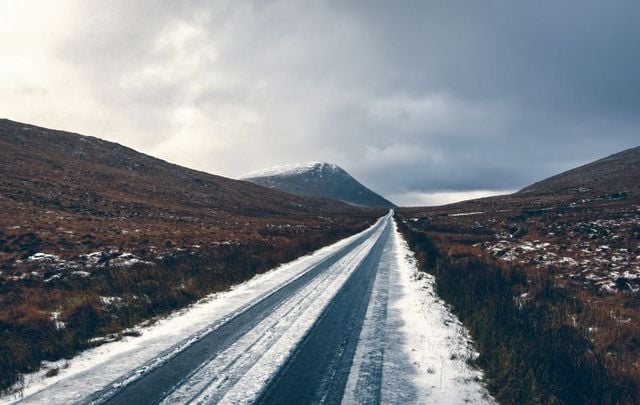 The last 10 miles of the road home at Christmas are always the best. That’s when the landmarks that exist in your history and your heart start coming into view.

There’s the wide lough were you swam as a child, there’s the house your true love grew up in, and later there’s the cozy pub with the open fire you’ll visit on St. Stephen’s Day. Everything is still in its place except you.

Read More: The best places in Ireland to celebrate Christmas

You won’t tell anyone about any of this as you drive past these places because the Irish don’t, but the truth is this topography is as much a part of your inner life as your outer one.

You may have taken this journey as many times in your imagination as you have in reality. You could probably find your way here with your eyes closed.

Emigrants remember things with a writer’s eye for detail because circumstances have ensured they live so far from what they recall. Nothing makes its presence felt like an absence. You’ll learn that the hard way because we all do.

You’re never alone at Christmas. That’s because all the people you once were appear to hail or haunt the footsteps of the person you now are.

They don’t teach you how to cope with all the ghosts that are suddenly abroad at this time of year, and they don’t mention that all your earlier selves will be among them.

The best ghost stories are told at Christmas, not Halloween because hidden in the heart of winter are all the radiant summers of your past. It’s like a door opens in your mind and you see them all.

There won’t be a thing you can do about it.

Your dad’s hair will have turned one shade whiter. You’ll say nothing about it. He’ll have grown smaller somehow, lost a bit of substance as if he’s deep in the first phases of a vanishing act. You’ll force yourself not to think of it because who could?

Your old bedroom has waited for you, and the blankets have already been turned down on your welcoming old bed. It groans a little under your weight the way it always has. It’s one of the first and best embraces that you’ll get here.

There’s the window you looked out at the ever-changing light on the ancient lough. It’s grey today with fog everywhere, but you can remember when that water was as blue and sparkling as the Aegean Sea. Your heart fills in the blanks.

You study yourself in the dresser mirror. You look different. You have somehow grown in stature and substance as this word has faded. The town where you lived once is losing its definition, losing its focus like the edges of a dream.

That’s when you hear the knock. It’s heard at the back door, not the front, signaling intimacy and knowing.

It’s your old friend, the best one, the one who saw you laugh and cry and didn’t judge either. The light in his eyes is the light in your own when you see each other.

He stayed and you didn’t. He wrapped this little town around him like a blanket and you cast it off forever.

He found an ease and welcome here that you didn’t. It’s a raw point between you that you both leave alone.

Instead tonight he’s the ghost of Christmas past.

When you talk to him about your life abroad he looks interested but his eyes cloud. He really comes to life when you talk about the old gang. Do you remember are his three favorite words.

No one can live as happily in the past as the Irish. It’s something we seem to do better than anyone.

We don’t mean to suggest that the present is not as vivid, or that these days don't have the glory of the old ones. It’s just that at times we seem hardwired to lament loss.

Later, at the old hotel, they play the old pop songs that you remember. Faces fan out across the dance floor, some vivid, some less so, some shining in welcome and some cold and turning away.

There was a time – for a few years – that this place was gold to you. And so when you finally see the face that you’ve been waiting all night to see, see him smiling and waving to his old crew, your heart turns over in your chest.

Time has shrouded all those endless summers and that face 20 feet away is the key that unlocks them, but that face will not look at you.

If the people around you notice any of this they don’t let on. Someone orders a new round of drinks.

At Christmas, the ghosts call the shots.