Historian Dr. Edward Madigan claims that modern British society is unwilling to accept that Crown Forces engaged in a brutal campaign in Ireland in 1919 - 1921. 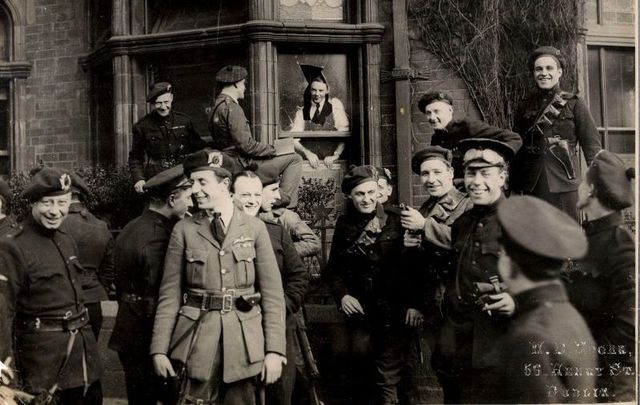 April 11, 1921: This shot of joking Black and Tans and Auxiliaries was taken outside the London and North Western Hotel, North Wall, Dublin as they surveyed the damage after an IRA attack on their quarters. Written on the mount of this photo was "Tans glad to have escaped the bombs thrown at their headquarters in Dublin". Flickr / National Library of Ireland on The Commons

British criticism of an award-winning 2006 film about the Irish War of Independence reflects unwillingness by modern British society to accept that Crown Forces engaged in a brutal campaign in Ireland between 1919 and 1921, according to a leading historian.

The assertion was made at a weekend panel discussion entitled "Let’s talk about the Black and Tans" in the West Cork History Festival by Dr. Edward Madigan of Royal Holloway University of London.

He said the critical and popular reaction to Ken Loach’s film, The Wind That Shakes the Barley, reflected both a British unfamiliarity with the conflict and an unwillingness to recognize that British servicemen could and did behave in such an outrageous manner.

The claim by Madigan came just two weeks after a memoir asserted that Margaret Thatcher was so ignorant of Irish history that at one stage she considered a Cromwell-type solution to the Northern Ireland problem by forcibly moving Irish Catholics in Northern Ireland from the six counties.

The Thatcher claim was in a posthumously published book, The Making of the Anglo-Irish Agreement of 1985 – A Memoir, by the late British Ambassador to Ireland David Goodall.

The Irish Times reports that at the West Cork festival, Madigan noted that scenes of torture, execution, and harassment in the Loach film were an anathema to commentators in Britain.

However, Madigan also noted that modern-day ignorance of the conflict contrasted with the huge contemporaneous coverage it received in the British press at the time.

He said that while Britain mourned its dead in the First World War, a moral crusade against the tyranny of the Germans, when reports emerged of British atrocities against civilians in Ireland, the British media covered the Irish conflict with admirable candor and honesty.

They focused initially on the violence being perpetrated by the IRA but then did not shirk away from reporting with equal honesty on the campaign of reprisals perpetrated by Crown Forces.

There was “fairly unanimous” press coverage in damning the Crown Forces and the British government in support of a policy of reprisals either tacitly or by order.

He added, “The British had emerged from the Great War on the moral high ground with a perception of themselves as defenders of the weak against military aggression, but the violence unleashed by Crown Forces against civilians in Ireland in 1920 and 1921 undermined that narrative.”

*This column first appeared in the August 11 edition of the weekly Irish Voice newspaper, sister publication to IrishCentral.