Texas Governor Greg Abbott is among those who are predicting “total chaos” at the Mexican border as Fox News shrieks about record numbers of "illegal" crossings. 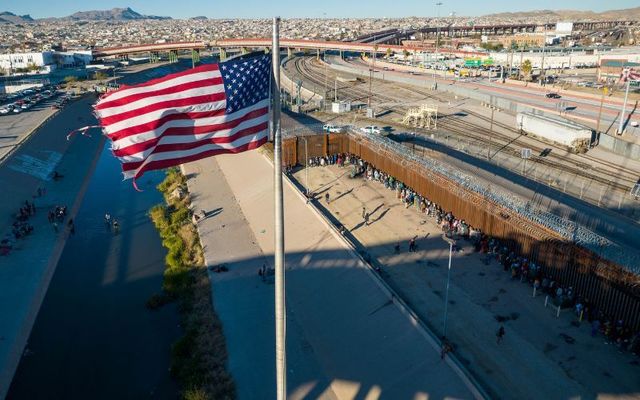 An aerial view of the American flags flying over an international bridge as immigrants line up next to the U.S.-Mexico border fence to seek asylum on December 22, 2022, in El Paso, Texas. Getty

It seemed like it went away. Now it seems to be roaring back.

No surprise, really.  Look around. See how crowded certain parts of the country have become.

It’s like we’re breathing all over each other. Temperatures outside fall and we’re stuck inside, watching TV.  Next thing you know it’s yet another wave of this terrible disease.

What?  You thought I was talking about Covid?

Good. Because I’m talking about that also.

Texas Governor Greg Abbott is among those who are predicting “total chaos” at the border.  At least if “the courts do not intervene and put a halt to the removal of Title 42.”

Don’t get all hung up on the details of Title 42.  It’s a little like those Donald Trump NFT things a bunch of people paid a bunch of money for last week.  The details are really complicated – and not really all that important.

We’re back to the same big, old questions about America and immigrants.  If this is just like what we’ve always done, or we’re finally taking a Central American detour on the road to our national apocalypse.

Over the past year or so, El Paso, Texas “is averaging over 2,000 illegal crossings a day” and “a 255 percent increase in encounters,” Fox News shrieked – I mean, reported – last week, adding, “There were more than 2.3 million migrant encounters in a historic (fiscal year) 2022, and already (fiscal year) 2023 is on track to outpace that number border-wide.”

The network continued, “Fox News footage taken Tuesday shows well over 1,000 migrants waiting to enter El Paso after crossing illegally into the U.S. and waiting to be let through a chain link fence. The predominantly Nicaraguan migrants were facing temperatures in the low 30s and could be seen in blankets and starting campfires in order to stay warm.”

Additional footage shows “a group of hundreds of adult migrants from Nicaragua, Cuba, Colombia, and the Dominican Republic,” in the vicinity of Del Rio, which “has seen over 107,000 illegal crossings in the last two months, up 55 percent for the same period last year.”

See?  No messy details about Title 42 or anything.

Just Democrats shaking their heads righteously – as if the present system is above criticism is good for anyone, from U.S. residents along the border to the desperate migrants themselves.

And for what it’s worth, Title 42 is about making sure people who enter the country do not pose any health risks.  I’m wondering if the faithfully masked out there are going to scold or stare coldly at 1,000 border-crossing migrants a day because they do not have properly-affixed N95s?

Meanwhile, Republicans howl about illegals, howl about how Biden and the inept, corrupt federal government that can’t or won’t do anything to save the country.

As if illegal immigration was this new problem created by Obamacare.

“How did the foreigners vote?” a journalist named William Stead asked a Chicago ward heeler, back around the time Ellis Island opened.

That’s when the Windy City Irish, led by bosses “Hinky Dink” McKenna and “Bathhouse” John Coughlin, were figuring out how to maintain power, while also, um, diversifying their voting rolls.

“These Italians voted all right,” the ward heeler responded, “because I made them citizens. They would not have had a vote but for me. Not one of them could speak a word of English.”

To be fair, this took a little doing.

When the ward heeler walked into court seeking naturalization, the judge asked all sorts of questions.

“So I went to another judge,” the ward heeler added.

When all was said and done, “the whole 54 were American citizens.”

You don’t think Tammany Hall in New York did the same kind of thing? Again and again and again.  For decades.

The only difference was that inept, corrupt state governments ran things.  The obvious solution was to get the states out of the immigration business once and for all and – wait for it – let the feds clean up the whole immigration system.