Contributor Bruce Blake recalls a rainy afternoon in an Irish seaside pub while waiting for a ferry. 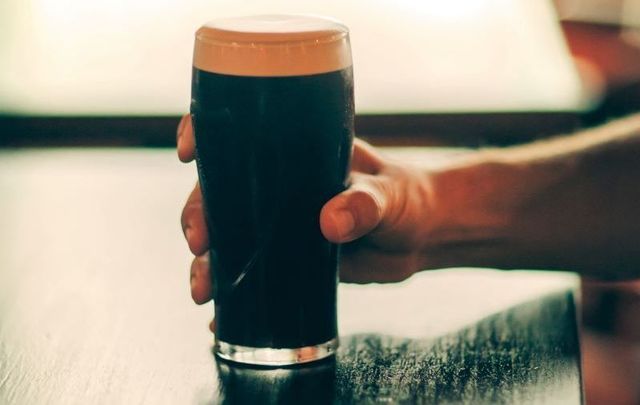 A pint on a rainy afternoon in an Irish seaside pub. Getty Images

More often than not, if you chance to find yourself in a small, seaside town in the west country of Ireland on a late spring afternoon, it's a pleasure. And it would have been for me, had the weather been better.

A few too many years ago now, I found myself at the end of a short pier there, as four of us stood quietly together, staring out at the sea. We took in the dark chop of the waves. And wondered at the empty nothingness of the gray sky. And pondered the vast void of ocean roiling below it for as far as our eyes could see.

That bleak grayness contrasted violently with the lush greens of the land that was spread out behind us. And up and over the hills that we'd only just finished crossing minutes before, in order to reach this desolate spot on-time.

The sun had hidden itself and the wind was rising now too. So much so, that even as strangers, we knew that it was about to rain, and probably quite heavily. We'd only just arrived, but it was already time to go.

Bagley: We have some time to kill.

Bagley: The ferry won't be here for another 45 minutes. And if there's heavy weather....

Bagley: Don't worry. <pointing> There's a pub right over there.

And so we did.

Once inside The Ferry Pub, we found a dark, snug, and quiet wood-paneled bar room that looked like it itself was part of a boat. Or perhaps pieces of it once had been. We each took seats at the empty bar and took the measure of our hosts--the only other people there--as they did the same with us.

They were one of those older couples that were either brother and sister, or perhaps had been married for decades. As soon as they spoke, it was obviously the latter:

She: <angling her head at us while speaking past us> They'll be wanting drinks...

She: Well, get the ladder first. I'll do this then.

She: <now addressing us directly>  What kin I get ferya...?

He: <announcing his return as she poured the drinks> Here's the ladder.

She: <Placing the last of the glasses on the bar> I'll be right there.

He: <Looking up while unfolding the ladder in a dark corner of the room> It's the second bulb this week!

She: <now holding the ladder as he climbs it> Aye.

He: <probing the dead bulb at the top of the ladder> D'ya think the rain'll come again now, or hold off til after dark?

She: Who can say the will of the wind? They've decided for it, but what do they know, really?

She: <looking up at him as he attempts with some difficulty to loosen the dead bulb> Can you reach it then...?

He: And break my head?

He: Fer a dead bulb?  Wouldn't that be fine.

He: <handing the dead bulb down to her> Here 'tis.

He: <laughing as he descends> Y'd be off with young Clancy or McGown this very evenin' I've no doubt of it!

He: <pointing to the corner> I could still be lying right there, still as a stone, not even cold yet.

She: <nodding with a smile> Aye.

He: <staring at her, his smile now gone> My head stove in.  My body broken. And you: dancin the night away!

He: Y'd just leave me lyin there alone?  Hang yer apron, off go the lights, and be right shut of this place fer good?

She: So climb down then, old man. And try not to break yer head or anything else on the way. We've not all day.

He: I'll put the ladder back.

He: <after stopping to open and look out the front door> Still raining.

He: D'ya think young Clancy'll make it in time?

He: In time for the ferry.

She: He's still got twenty minutes or so.

He: No. Not if he wants his Guinness, and the chance to smile at you again before he boards for Kerry.

He: No? And me still lyin right over there, had I but slipped...?

She: Aye. Could have been.

He: For the Guinness? For the smiles? The boat? Or the dancing...?

He: Perhaps. But with this rain...

She: Aye. The ferry waits fer no man. Not even Clancy.