Father John McNicholas founded the Legion of Decency in an attempt to censor films promoting "sex mania" in the 1920s. 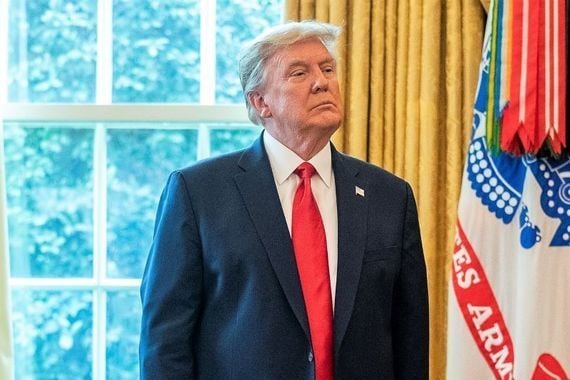 Donald Trump's Twitter account was suspended in the wake of the Capitol riots on January 6. White House Flickr/Public Domain

PATRICK and Mary McNicholas left Kiltimagh, Co. Mayo in 1881, settling in Pennsylvania where they raised their son John.

Pat and Mary surely had dreams, as all immigrants do. And if you told them that when their son John grew up thousands of people would hang on his every word, well, you have to believe they would burst with pride.

If you then told Pat and Mary that two of John McNicholas’ most famous words would be “sex mania”... well, they probably would have been confused.

John McNicholas was a gifted student who eventually entered the Dominican religious order and the priesthood. By the 1920s he was at the center of the debate over a popular new technology -- movies.

To McNicholas and millions of other Catholics, from the Vatican to the Lower East Side, this new storytelling medium was undeniably powerful and incredibly dangerous.

These “talking pictures” could corrupt the morals of Catholic youth. There was naughty language to be heard and skimpy outfits to be seen.

Such subject matter would surely damage anyone who came into contact with it. And then these damaged people would surely do damage to the world.

So, McNicholas was a driving force behind what came to be called the Legion of Decency, a Catholic-led organization designed to identify “those salacious motion pictures which, with other degrading agencies, are corrupting public morals and promoting a sex mania in our land,” as a pledge written by McNicholas put it.

Millions were dedicated to this cause. At the same time, it wasn’t long before just as many were mocking the Legion and its uptight followers.

And so began a tradition in America, from the Legion of Decency right up to Tipper Gore and her war against filthy rap music and satanic heavy metal.  One side was endlessly worried about how people were too fragile to handle certain kinds of music and movies, art and ideas.

The other side just enjoyed -- or at least could live with -- a wide range of music and movies, art and ideas.

But look what’s happening these days.  Many of the people who would have mocked John McNicholas and Tipper Gore are acting an awful lot like them.

At least Tipper and Father John were mainly worried about children.

It’s understandable why folks would want the likes of Donald Trump to shut up once and for all.

And Trump sounds like the brilliant love child of William Shakespeare and Emily Dickinson compared to this Marjorie Taylor Greene, the gun-loving congresswoman who has said all sorts of horrendous things about Jews and school shootings and pedophiles (they’re all Democrats!)

And so, anti-conservative activists have spent lots of time crafting compelling reasons why such speech is not only dumb and moronic.  They believe it is dangerous and must be suppressed.

True, no one here is calling for the FBI to swoop in and shut down publishers of controversial opinions.  This is what did happen during World War I in the U.S. 100 years ago, including to Irish American (so-called “anti-British”) media outlets.

But lots of time has been spent calling for posts to be deleted or never published, and advertiser boycotts, and “de-platforming” certain folks on social media.

All on the same premise that Tipper and Father John peddled -- troubling words lead to troubling actions. People simply can’t handle it.

That’s bad enough. But what about the inevitable boomerang effect that today’s neo-censors simply don’t seem to be taking into account?

The very causes they are often fighting for -- usually, commendably, the marginalized vs. the powerful -- only have any kind of voice because not too long ago, such controversial opinions had to be tolerated by forces that once tried to shut them down.

The only thing more troubling than a potentially dangerous idea is attempting to suppress one.

It’s great that today’s progressives want to make the world a better and safer place. But so did Tipper Gore and the Legion of Decency.

And they cleaned up music and movies, right?