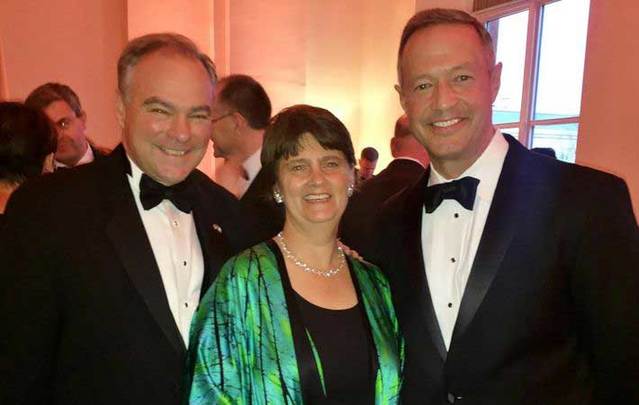 Tim Kaine, Hillary Clinton’s pick for Vice President has a secret weapon - his harmonica. When things slow down and a party needs a burst of old fashioned song and hoopla, Kaine forgets his strait laced persona and usually volunteers a tune or two - Johnny Cash numbers are a specialty, especially "Folsom Prison Blues” and gets the toes tapping again.

He picked up his harmonica at the American Ireland Fund dinner, in Washington, in March, where a lively evening was further enlivened when the new Vice President pick for Hillary Clinton took the stage.

He can do Irish, Appalachian, and southern country and he’s the most famous figure, right now, out of Virginia since New York linebacker legend Lawrence Taylor.

Senator Kaine and his wife, Virginia Secretary of Education Anne Holton, make an extraordinary political couple and if they ever make it to the Naval Observatory, the home of the Vice President, they are bound to make an incredible impression.

On the Irish political side of things, Kaine has been a member of The Irish National Caucus since December 2012. The Caucus is a, once controversial, group who put it up to the British on the North often more than the Irish government wanted. They sport a letter on their site from 2012 with Kaine saying he is happy to join them as he arrives in the Senate to serve his first term. They are seen as more hard-line on Ireland than the Congressional Friends of Ireland that Kaine also belongs to, which carries out much of the Irish government's agenda.

Kaine certainly feels Ireland in his heart. During his acceptance speech for The American Ireland Fund Leadership Award, he talked about his family's 2006 trip to Ireland, where they found the ruins of his great-grandfather's cottage in Killashee Parish, in Longford.

He stated at the dinner: “I am about as stone Irish as you get for somebody whose family has been in the country for 150 years.”

He visited Ireland during his first year as governor of Virginia, with his wife Anne and three children. They visited the ruins of the home of his great-grandfather, PJ Farrell who later emigrated to Kansas, where he became a successful farmer.

Kaine told the dinner about how his children were unhappy with leaving "cool" Dublin to search for his family roots in County Longford.

“As we drove to Longford, which isn’t exactly the tourist zone, they continued to complain,” he said.

He also has Kilkenny root, which makes him the exception, as most Irish roots go back to the traditional Irish western seaboard counties like Mayo, Galway, and Kerry.

Here are his very moving remarks to  the American Ireland Fund on finding his roots:

“All four of my grandparents were born to Irish immigrants. Three to families where both the Mom and Dad were from Ireland and one to a family where the Mom was from Ireland and the Dad was Scottish born but moved to Northern Ireland before emigrating to the United States.

“And I will say this too, I am pure black Irish, there is not a red-headed Norseman anywhere in our family.  But that makes this very, very special. Until I was 48 years old, Ireland played a huge and important role in my life but sort-of in the dreams of my life…I had never been to Ireland. So it was photos, it was genealogy and it was family stories and it was Roman Catholicism and it was music and it was St. Patrick’s Day. That’s what being Irish meant to me but I felt the deep connection to it.

“When I was Governor of Virginia in my first year, 2006, my wife Anne and I took our three children to Ireland to go find the ruins of the home where my great-grandfather, PJ Farrell, was born.  My  parents had been there before and found it.  We went to Dublin and my children were having a blast, they were all teenagers and when I said ‘we have to spend a day traipsing around in the countryside instead of hanging around in Temple Bar and Grafton Street’ they were extremely disappointed in their Father.

“As we drove to Longford which isn’t exactly the tourist zone they continued to complain.  But when we landed in Longford town my 11 year old daughter said to me, ‘Dad, why does everyone look like us?’ And they started to get it.

“And then we drove the 10 km to Killashee Parish and then we parked the vehicle and traipsed a half a mile across fields and found two still standing walls of what had been a house with windows and doors now with a tin roof stacked with hay and I told my children, ‘This is where we come from.’  And it, even with unruly and obnoxious teenagers it made a huge impact on them and since that time we have been back very, very often.”

Kaine quotes W.B. Yeats a lot, something he has in common with outgoing VP Joe Biden, most recently when talking about the Syrian refugee crisis where he pleaded that ISIS was the enemy not the refugees.

He stated “Yeats wrote a poem after World War I surveying the wreckage of these societies called, “The Second Coming”, and he expressed a real concern about the state of society at the time because what he noticed was at that time “the best lack all conviction and the worst; are filled with passionate intensity.”

He was raised devoutly Catholic so much so that his parents would rush back from wherever they were to make sure they made a Sunday evening Mass and knew all the churches that had them.

He is a new Catholic in the likeness of Pope Francis, deeply committed to social justice and reflecting the same Jesuit background and schooling the pope has.

His perfect Spanish come from his mission to South America here he lived for over a year helping with construction projects.

Finally, he is the second Irish Catholic in a row chosen by the Democrats as their Vice President pick - remarkable when you ponder there was never a Catholic VP before Biden.

Mike Pence, Donald Trump’s running mate of course was also raised Irish Catholic before he turned to evangelical but the two men have obviously much in common.

Both will become party front runners for the White House if the ticket goes down in flames. Equally both are young enough to run in eight years if their ticket takes the White House. We could see a day when an Irish evangelical faces an Irish Catholic for the top job.

"All changed, changed utterly" as Yeats might have said.