Kevin McCarthy’s lust for power will result in a complete loss for the Republican House Minority Leader and the GOP. 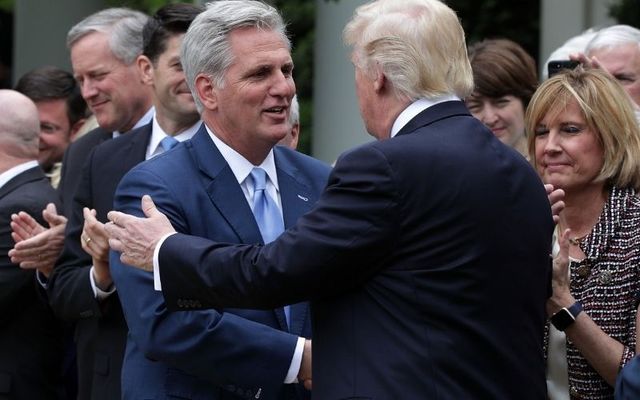 Well, that did not take long! A few weeks after showing some testicular fortitude and criticizing President Trump’s outrageous behavior on January 6th, House Minority Leader Kevin McCarthy was spotted at Mar A Lago butt-sniffing his old boss Donald Trump.

Denial of any responsibility for January 6th  seemed to be the new mantra as McCarthy proudly posed for pictures beside the closest thing to a dictator that America has ever witnessed.

Trump is a man who fought at several different levels to disenfranchise American voters and steal an election. He sought to interfere in the count in Georgia, he filed utterly bogus lawsuits, he tried to corruptly use the Justice Department and lit the flame for a riot situation. Luckily he failed on all levels but still refused to concede.

The temporary little rebellion flag against Trump had been hoisted by Senate minority leader Mitch McConnell and McCarthy but it soon disappeared with them right back into their rabbit holes as soon as the Great Trump made clear his wishes. So McCarthy and Mitch are once again Proud Boys, sharing the party with known white supremacists and conspiracy-obsessed QAnon.

The lack of gumption and acceptance of anti-democratic norms, including trying to steal an election by fomenting a riot, was suddenly swept under the carpet and the corpulent Trump re-appeared in triumph, seemingly back at the head of the party he is about to destroy.

Which losing aspect of Trump do Republicans believe can still carry them to victory?

Under his stewardship, his party lost the popular vote in two presidential elections, the House and the Senate. Trump can’t stop losing it seems. Republicans have only won a majority of voters in presidential elections once since 1988, a 32-year span. Whatever they are selling, the voters ain’t buying.

Yet Trump, who should have hosted the TV show called “The Biggest Loser” and not “The Apprentice”,  continues to have a stranglehold over the party he is choking to death.

He never once surpassed the 50 percent mark in favorability rating, he is almost certainly unelectable as president in any race in the future.

Yet he stays at the head of his party with acolytes like McCarthy, ignoring the harm he has done to democracy in order to fuel their shared lust for power.

The problem is, of course, that the mob now rules the Republican Party. McCarthy rationalises his behavior by believing the motto “there go my people, I must follow them.”

Trump has now trapped McCarthy pure and simple.  McCarthy had one chance to stand up for decency and the law and took the road to Trump instead. It is the road to perdition.

McCarthy sees that and has decided to ignore it. The funeral bell is tolling for him and the GOP.