Irish pubs will finally have beer on Good Friday, no need to go to dog show anymore

Good Friday used to be the one day in the year when you couldn’t buy a drink in Ireland. Now that 90-year-rule has been overturned. 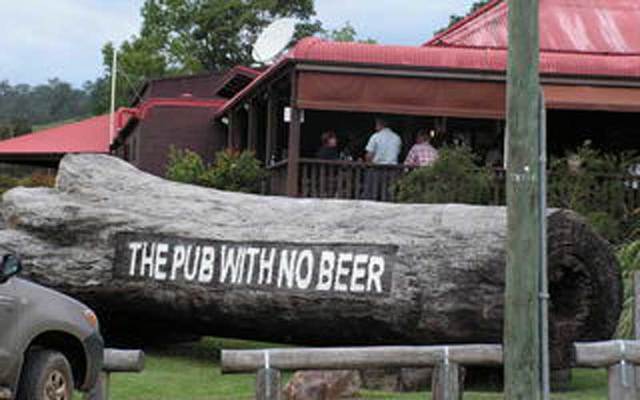 The Pub with No Beer Hotel. Jenny and Jamie/gdaypubs.com.au

The Intoxicating Liquor (Amendment) Bill 2017 allowing alcohol to be sold will be the law for Good Friday 2018.

The 90-year ban is over but it never stopped people from trying.

Years ago, a bunch of famous writers suddenly developed a deep love for all things canine and made their way to the annual dog show at the Royal Dublin arena.

It transpired of course that Patrick Kavanagh and Brendan Behan had discovered that the old Protestant establishment place served drink in the member's lounge at the dog show.

Stories that Behan scooped up a stray poodle and made his way inside and that Patrick Kavanagh paid a young lady to 'rent ' her dog to him for a brief while have never been confirmed.

What did happen, apparently, was a crush of strange dog fanciers at the following year's show on Good Friday as all and sundry figured out that the only place in Dublin with beer was the canine carnival.

Word is that that particular loophole was closed after the show was mobbed.

However, in recent years a loophole allows drink at the Greyhound racing track on Good Friday so the folks who wouldn’t know a greyhound from a grey moose suddenly discovered that going to the dogs was the place to be Good Friday.

Likewise one never knew Ireland had so many thespian lovers. Productions at the Abbey Theater were allegedly sold out, unrelated of course to the fact that drink was served in the theater bar due to a loophole. Many a thirsty man or woman had their introduction to the arts world enriched on such occasions.

One year, Dublin bar owners came up with another scheme. They opened the pubs but didn't serve beer or any alcohol--only food and soft drinks.

That was the equivalent of showing a drowning man a life raft and then pulling it away.

Some pretended to live by the rules, others served drink out the back as is invariably done in those occasions.

The back door system can be quite complicated, especially in rural areas. Only those in the know are allowed to know the special rap on the back door that results in bottles being handed out.

It was quite common in the old days for all manners of characters to hang around the back door hoping to learn the secret knock.

It was perverse for the Irish of course, to insist on drink the one day they could not have it.

It made many of them even more determined to get one.

They will be out and about this Friday too, mark my words.

It's "Last call for no alcohol" Good Friday.