An Australian account from 1849 tells the horrors that four girls, possibly Irish orphans, faced aboard the Ramilies ship. 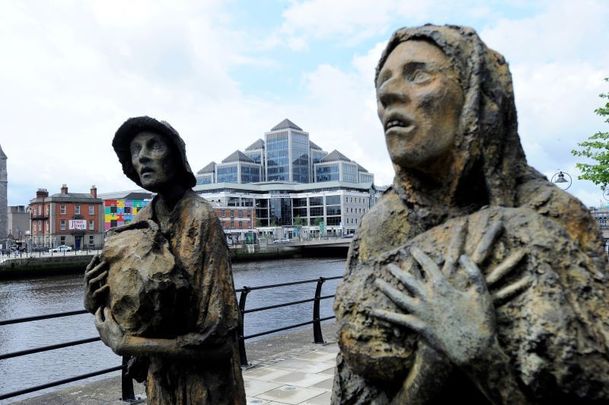 A Famine Memorial shaped like a boat in Dublin. RollingNews

Thousands of orphaned Irish girls were taken from workhouses in the 1840s and sent to Australia where they were needed to serve the needs of the new colonists, and many welcomed the opportunity for a new life.

It is estimated up to 4,000 young girls, some not even teenagers, made the hellish trip.

But what awaited them in Australia was often a horrific experience, sold into prostitution or made indentured servants of harsh employers.

Now come details I had not heard before that some of the young girls were also badly maltreated on board the British ships that took them to Australia. In short, they were flogged half to death.

Just how badly the Irish girls were treated can be ascertained by a contemporary editorial entitled "Flogging Females on Board the 'Ramilies'" in an Australian newspaper which caught my eye when I was investigating a story on Irish convicts in Australia.

The article needs no embellishment or hype. It shows the horrific fate that awaited them on board the British ship Ramilies which was used to transport them. Four young girls who were flogged possibly Irish orphans, according to the manifest.

The editorial is from the Perth Gazette and Independent Journal of Politics and News, dated July 27, 1849: “As to the general treatment of the passengers we receive various accounts but this is not the object of our present notice. All are agreed in the fact that four female emigrants were flogged during the passage. Their names are Catherine Morgan, Phoebe Spooner, Jane Downey, and Margaret Mack.

“Of their conduct we hear conflicting accounts, but this is of no material consequence. The fact is certain that fully grown girls -- 17 or 18 years old -- were flogged by the surgeon with his own hand, a rope's end being the instrument of torture used. Besides the surgeon and captain we cannot learn that any persons were present but two men who acted as constables or surgeons assistants.

“The particulars of what passed in the ‘Chamber of the Question’ we cannot give, but we have spoken with several, both male and female -- one a married and apparently respectable woman who examined the girls’ backs and found them scored with wails of red and blue as large as the finger, and one was bleeding.

“The mind can hardly dwell on the revolting idea of men holding a half naked girl and flogging her till the blood starts from her skin. We read of such horrors in Russian dungeons, but scarcely give them credit.

“Of all the charges made against the slave system, the flogging of women was perhaps the most popular. Exertions are yearly made in Parliament, and are seconded by almost every paper, to abolish flogging in the army and navy. Yet in 1849, in a ship sailing under government guarantee, is the system commenced in its very worst form.”

One can only imagine what those young girls went through.  Female flogging was essentially unheard of at the time. The cruel and savagery they had experienced in life followed them to the New World.

Let us hope the rest of their lives were not as brutal.