Rory Staunton died of sepsis, an eminently curable disease, in a New York Hospital on April 1, 2012. 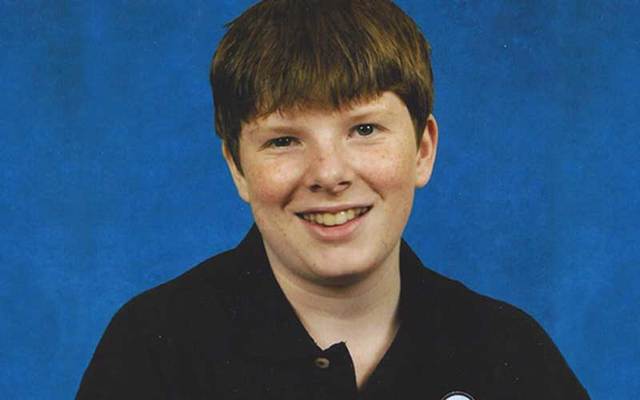 Five years ago this week, my nephew Rory Staunton died of sepsis, an eminently curable disease, in a New York Hospital. It was the most shattering day of all our lives, his family and friends.

Below is the tribute I paid a very special little boy, who despite the passage of years, remains as fresh and fair in my memory as if I had seen him yesterday. He was that kind of kid. Thinking of you Rory, now and always.

This is the toughest column I will ever write and the one I least expected to.

On Sunday April 1st 2012, in a New York hospital my beautiful 12-year-old nephew Rory Staunton passed from this earth.

Rory wasn’t just my nephew, he was the son I never had, the precious possession of my sister Orlaith and her husband Ciaran Staunton, along with their daughter Kathleen.

Orlaith was the one that followed me to America. I introduced her and Ciaran on an Irish weekend in the Catskills back in the 1990s. Soon they were pledged to each other and they have had a wonderful marriage and family.

From earliest times, Rory was a laughing little boy, an impish toddler always ready for fun, especially when his sister Kathleen and her sidekick, my daughter Alana, were involved.

In later years, he was also strangely mature for his age, taking part in adult conversations while other kids played childhood games.

I tried to steal Rory away often; a Notre Dame game, a weekend at our house, whenever the opportunity presented itself. I reveled in this big laughing Irishman, with the "Simpsons" and "Family Guy" obsession, the absurd sense of humor and the serious political side of him who studied American politics with the intensity of a professional.

JFK was his hero he told me, because of his idealism. Rory too wanted to make a difference, to help the less well off. For one so young he already had a highly developed social conscience.

He had already been to the White House and had met President Obama and Michelle on St. Patrick’s Day in 2011. Not surprisingly, given his parents and their keen interest in all things political, Rory was fast becoming a political expert.

Rory charmed the pants off whoever met him. The girls were already showing interest, but Rory was a busy guy. He had taken flying lessons at 11, leaving his parents with their hearts in their mouths as he flew fearlessly into the wild blue yonder with his instructor.

Ireland was his spiritual home. On vacations back in his Dad’s Mayo or his Mom’s Kerry and Louth he fell in with the locals and a gaggle of cousins, discussed Mayo’s continued Gaelic Football failures with the best of them and came back to New York as attuned to Ireland and its rhythms as any local.

He was about to spread his wings, and Georgetown University and its politics degree were on his radar. Rory was opening up, emerging from a chrysalis, ready for the beckoning world, to take flight.

Then on April 1st we lost him. Four days earlier he had received an elbow scrape after falling while playing basketball, which had somehow allowed a toxic bacteria into his system. Two days later he was hospitalized, fighting for his life, a battle he ultimately lost.

There is an air of unreality even as I write this. My beautiful red-headed, five-foot nine-inch tall nephew has departed, leaving an utterly broken family and circle of friends that stretches from New York to Ireland to many other points behind.

It was the worst weekend of my life as I watched the beloved boy battle vainly against the host of toxins that were attacking him.

Despite the best efforts of outstanding doctors and nurses in the Intensive Care Unit , the darling boy did not survive.

He is gone now into the wild blue yonder where he used to travel as a pilot in the making.

Soar high Rory, and keep watch on us down below. We love you and miss you so much. Some day with a blue sky above and a fair wind behind, and our hearts full, our dreams will come true and we will meet our beautiful boy again.