John Spain, longtime columnist for the Irish Voice newspaper, is remembered fondly by his editor and friend Debbie McGoldrick following his passing. 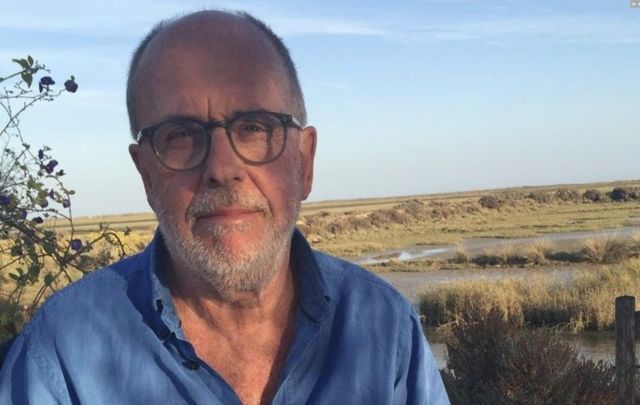 Columnist John Spain was one of the original columnists for the Irish Voice newspaper which was launched in NYC in 1987. Debbie McGoldrick / Irish Voice

Irish Voice columnist John Spain passed away last week at the age of 75. He filed a weekly column for the Irish Voice, sister publication to IrishCentral, since the first issue of the newspaper in 1987.

The Irish Voice has lost an anchor, the one and only John Spain, our columnist based in Ireland since the first issue of the Voice in December of 1987. John, 75, passed away in a Dublin hospital on October 27 after a brave battle against cancer. The Voice won’t be the same without him as many of our readers will surely agree.

I adored John, both on a professional and personal level. The first time I met him in Dublin, and this is going back a good few years, he looked a lot different from the little photo that we used for his column header. I asked if he wanted to supply an update, but the answer was an emphatic no.

“I’m not doing that! There are too many Irish Americans who can’t stand what I write and I don’t need any of them recognizing me,” was his reply.

He wasn’t wrong. John regularly wrote about The Troubles in the North and, putting it mildly, was a strident opponent of the IRA’s armed “Brits Out” campaign. We’d get lots of letters criticizing him as a West Brit, a fake Irishman, and much worse.

But John never cared and always wrote what was on his mind. He was appalled at the violence on all sides and didn’t think that a united Ireland was worth the bloodshed. He also thought that Irish Americans who supported the ‘Ra with money or deeds were badly misinformed about the reality on the ground.

So imagine his delight when one day in 1993 I called to tell him he had a new Voice colleague – none other than Sinn Féin President Gerry Adams, who began writing a weekly column for us that year, the first time Gerry’s voice was introduced to an American audience, completely unfiltered.

Truth be told, John was fine with our new hire. He never believed in censorship, though he told me many times to “feel free to cut” anything I might find incendiary or unfit to print in his column.

Other than shifting a few commas here and there, I never once edited or changed John’s words. And as the years passed he laughed when I would joke with him about being mean to his colleague Gerry, who he grew to at least somewhat respect as the peace process took root in the North and the IRA armed campaign ended (though JS never believed that the IRA had truly gone away, as he often wrote.) 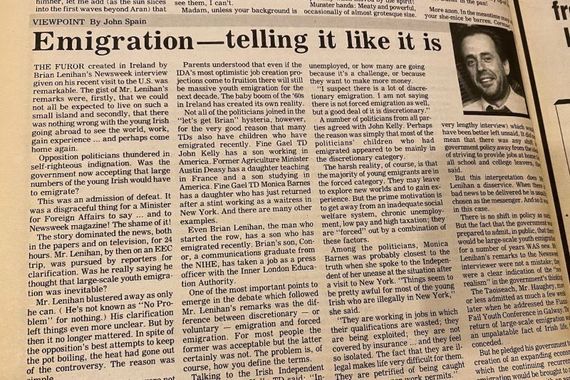 A photo of John Spain’s first column for the Irish Voice, in its debut issue dated Saturday, December 5, 1987.

John had a long and meaningful media career for decades in Dublin, first with the Irish Press and then the Irish Independent where he wore many hats, including books editor. He wasn’t shy about pinching some photos from the Indo’s picture desk, stuffing them in an envelope, and mailing them to me for use in the Voice.

These were the days, early 1990s, when the internet was unheard of and fax machines were the rage. But photos didn’t reproduce well on faxes, so when John’s envelopes would arrive it was like Christmas Day.

A new photo of Mary Robinson! Albert Reynolds! Jack Charlton! A farm scene somewhere in the middle of Ireland! We were thrilled.

The beauty of John’s writing for the Voice was his uncanny ability to examine complex subjects in Irish life – tax codes, the Celtic Tiger bust, the Anglo Irish Agreement, Brexit, social issues, etc. – and explain them in clear, easy to understand language. With a sizable helping of his opinion, of course.

I think his readers would agree with me that John knew a whole lot about a whole bunch of things. And his page was a great source of education and enlightenment for us all.

John loved his life in the media, but he loved his family much more. He has three grown children, Lily and twins Jack and Harry, and his wife is Carolyn Donnelly, designer and the creative director of the huge Dunnes Stores in Ireland who helms her own fashion and homeware lines. John loved talking about Carolyn and all her successes, and traveling with her to Italy or other places where she would go to scout new materials with her design team, or seek creative inspiration.

I was in Limerick four years ago, at a huge Dunnes on the outskirts of the city center, and Carolyn’s face was all over promoting her Eclectic and The Edit lines. John was a proud husband when I told him, though he wasn’t surprised.  “It’s like that at all the Dunnes. She’s incredible,” he said.

I think John was equally outstanding. Every Monday morning, he’d be one of the early birds emailing his copy before deadline. I always looked forward to reading it, especially during the weeks when there wasn’t much going on in the news and I’d be hard-pressed for a decent front-page lead story. I figured John would bail me out with a newsy or opinionated column, and he always did just that.

He didn’t want to hang around writing for us forever, though. In fact, on more than one occasion, I had to talk him out of retirement, and then it got to the point where I didn’t even listen when he said he might like to finish up.

The first time he wanted to quit came when the Voice marked its 25th anniversary in 2012. I asked JS to write a reflective piece for that special issue. He was happy to, and then he informed me that he thought the column would be a good way to close off his Voice career.

“Twenty-five is a nice round number,” I always remember him saying to me.

That is not what I wanted to hear in the middle of our celebrations. “The number is going to have get rounder, much rounder…you’re going nowhere,” I protested.

John honestly thought that he had run out of things to say, that our readers were sick of him and that “someone younger” might have more to contribute.

Youth can’t replace Tom Brady, and the same was true for JS. His columns were required reading, and when he missed a couple of weeks or so due to vacation readers wanted to know when he was coming back.

JS took a few weeks off in 2015 when he was first diagnosed with bowel cancer. He was fortunate that it was detected early thanks to a national screening program in Ireland. He recovered well and even wrote a column, one of his more memorable ones, about what he went through and his gratitude for catching the cancer early.

And his health was good for a long time, until it wasn’t. In February, he wrote to me about needing intensive cancer treatment and that he’d likely have to quit the column.

It was a lump in the throat moment reading those words, but brighter months were to come. JS responded to the treatment nicely and it wasn’t proving too stressful on his body.

“The column is actually a great diversion for me! So I’ll keep going,” he said.

He did just that, right up until September 30. The email subject line was to the point: “Spain Final Column 2,000 Words.”

It was a shock to the system, reading those words which I knew I couldn’t reverse. It took me a couple of days to absorb that John’s health was deteriorating and that the Irish Voice was losing one of its superstars.

Since news of John’s death last week became public, we’ve received so many kind emails offering sympathies and words of praise. My inbox on Friday contained a lovely message from Liam Neeson, a regular reader of the Voice who is a big fan of John.

“Very saddened to hear of Mr. Spain’s passing. As an avid reader of Niall O’Dowd’s weekly Irish Voice here in the U.S., John Spain’s column was always never less than thought-provoking. A much-needed voice, especially in these politically and economically tumultuous times we are now living in. Rest in eternal peace,” he wrote.

I asked Liam if I could share his words for this piece, and he said yes. I had known for some time that John was one of his must-reads. In fact, I used this knowledge as a tool when JS was in retirement mode. “You can’t leave! Liam Neeson will miss you more than I will!” I’d say.

John stayed with us. For nearly 34 glorious years. There were no ups and downs – it was all up with John.

I’m so grateful for him, for his knowledge, his wisdom, his friendship. For being a true blue Irish Voice.

*You can read John Spain's columns for the Irish Voice and IrishCentral here.