There are no 8,000 people on the streets - "the good news for those 184 people is that no one needs to sleep rough in Dublin this Christmas" 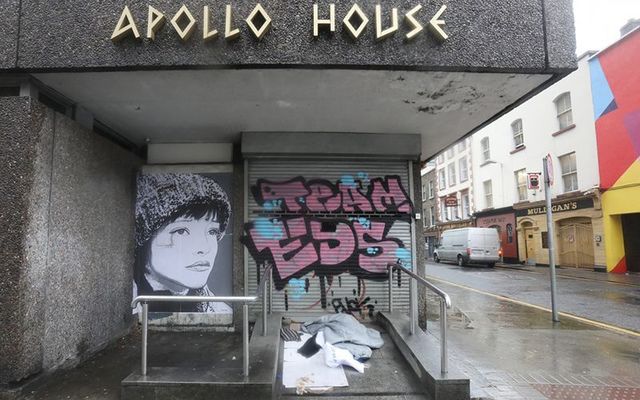 A homeless person sleeping outside Apollo House in Dublin. RollingNews

There are no 8,000 people on the streets - "the good news for those 184 people is that no one needs to sleep rough in Dublin this Christmas"

Homelessness has been high on the news agenda here this week as Christmas approaches.   That is not surprising since it's an emotive Christmas story for the media, echoing the original Christmas when Mary and Joseph were turned away at the inn and had to sleep rough in a stable.  With rough sleepers on the streets in Dublin, the parallels are obvious.

So homelessness became our Christmas story again this year, just as it was last year.   There was another TV special on the subject this week and upsetting interviews on radio and in the papers with individuals who are homeless.  Celebrities, sports stars and students were sleeping outside last weekend to raise awareness, and numerous groups of fundraisers were shaking buckets in the city center to "help the homeless."

It's understandable that so many people want to be involved and do something to help.  It's a highly emotive topic at any time, but particularly at Christmas.   It tugs at the heartstrings at this time of year when we all cherish home and family so much.

But it's far more complicated than the individual stories that were highlighted in the media over the past week. Less emotive, superficial reporting and more investigation of the causes of individual cases of homelessness would be more enlightening.  It would also be more helpful in understanding the overall problem.

Much of the coverage of the homeless issue this week made the same mistake that we commented on in this column a few weeks ago.  It mixed together homelessness and rough sleepers, with most of the stories about the misery of those sleeping on the streets referring to the more than 8,000 people who are homeless in Ireland at this time.  For extra emotional impact, these stories frequently added that this figure includes over 3,000 children.

The most recent figures show a record total of more than 8,492 people homeless in Ireland. Nationally there are now 5,298 adults and 3,194 children homeless meaning more than 1 in 3 people experiencing homelessness is a child.
Donate here: https://t.co/XMi5Rz8Hkf pic.twitter.com/fiRUsDEcJk

As we have pointed out here before, this can give the impression that over 8,000 homeless adults and children are sleeping rough in Ireland, when in fact they are in emergency accommodation -- mainly hotel and B&B rooms -- paid for by the state.  They are not on the streets.

Yet all the media here, even the country's most respected newspaper, The Irish Times, regularly conflate the homeless with rough sleepers, presumably because it makes a better story.   Last weekend, for example, the Times ran another story about homelessness and illustrated it with a picture of a rough sleeper in a doorway.

Last weekend, a large number of sports people slept overnight in sleeping bags outside the GPO on O'Connell Street in Dublin city center.   In front of posters about the 8,000 homeless, some of those interviewed talked about how you had to do this to really understand how awful homelessness is.

No one doubts their sincerity, but this gives a misleading message.   To repeat, there are not 8,000 people in sleeping bags on the streets of Ireland.

On most nights, of course, there are rough sleepers on city streets, but they are only a tiny fraction of those who are homeless.  In fact the last comprehensive count in Dublin, taken on on the night of November 7 by the Dublin Region Homeless Executive, found 184 people sleeping rough in the city (out of a population of over a million).

And the good news for those 184 people is that no one needs to sleep rough in Dublin this Christmas.   As promised by the government a few weeks ago, there are now more than enough beds available in emergency shelters, where heat, food and showers are usually available as well as a bed for the night.

It may not suit the emotive media narrative, but that is the fact.  An extra 200 beds have been added to the system in Dublin, and a check on one night a week ago showed that free beds were available for any rough sleeper who wanted one.

That does not mean, however, that no one will sleep rough in Dublin this Christmas.  Many rough sleepers have alcohol, drug and mental health issues that result in them choosing to stay outside and refusing to engage with services.  And if some of them do make that choice this Christmas and are spotted by the media, the story will again be turned into an attack on the "uncaring government."

A debate in the Dail on homelessness last Friday included an emotional speech by one opposition politician who talked about her daughter giving money to a homeless young man who was crying on the street in the city center.  This was a moving account, again used to back up the uncaring government narrative, but we don't know any of the reasons why this young man was on the streets, his family circumstances and so on.

There was also a lot of media outrage because only 20 politicians out of the 158 in the Dail had turned up to take part in the debate.  The reality is that Dail attendance on Fridays is always low because no votes are taken and most politicians are gone back to their constituencies down the country.

Another story to make the headlines last week was that of Frank, a 71-year-old Dublin man who was about to become homeless.  His landlord is selling the house where he had lived for the previous seven years and he appeared sadly resigned to his fate.   This led to the intervention of a government minister, and within one day the TV cameras were accompanying the man as he admired a new one bedroom flat which had just been assigned to him by the council.

A story with a happy ending ... but also one that raised several questions.   Had he jumped the council housing list because of the publicity and ministerial pressure? Where was his extended family -- the original story had referred to a separation 20 years earlier -- and could they have helped him?   Was he a more deserving case than, say, a homeless single mother with a baby?

None of these questions were asked.   This was another example of an emotive story being used to make headlines but without much detail or context offered to explain why Frank had no other options.   Although it was not mentioned, this case should also have drawn attention to the wider problem of older people living in homes that are too big for their needs.

Minister Eoghan Murphy says there will be taxis and buses deployed throughout Ireland to help homeless people into emergency accommodation pic.twitter.com/GrIME56PAb

In the last 30 years or so, the number of homes in Ireland with just one or two people (often an elderly couple) living in them has tripled from around 300,000 to 900,000.  Many of these homes are two or three-bedroom houses and they include many council homes. Yet at the same time we have young people who can't find a place to live that they can afford, or are waiting for years on social housing lists.

The wider context for the homeless debate tends to get lost in much of the discussion about the problem.   The basic reason we have a housing crisis is the financial crash here a decade ago which stopped all construction, both private and state.   Getting that up to speed again is taking time, partly because there is still a limit to the funding available and we have a shortage of construction workers.

The lack of supply has caused a spike in house prices and rents, which is driving a modest resurgence in building activity that is now gathering pace.   That is evident particularly in Dublin, but it's still on a relatively small scale in relation to the size of the problem.  There is a long way to go and there is no quick and easy solution, despite what opportunistic politicians on the left say.

The current debate about homelessness in the media presents the problem in a simplified and emotive way which avoids putting any searching questions to those who are in emergency accommodation.   Questions about whether a partner is contributing or whether the extended family have available space in their homes are never asked.  It's always the state's problem.

Close to half of the 8,000 homeless are families, including many single parent families with children.   A few decades ago their extended families would have helped -- and many families still do -- but these days there is an expectation that the state must step in and provide accommodation in all cases without any delay.

A report published by the Dublin Region Homeless Executive last week revealed that in the first half of this year more families became homeless because of  “difficult family circumstances” than were removed by landlords from rented homes.   These circumstances included claims of overcrowded accommodation and arguments with family members or partners.    So instead of it being "bad landlords" putting people on the street it was family disagreements that had caused the problem, which is not the usual perception. An additional factor is the incentive to present as homeless rather than find another solution because it may get the applicant bumped up the housing list.   One local councilor in the north Dublin area recently claimed that he knew of cases where this was happening.  The people involved were willing to put up with being in emergency accommodation for a year if it meant they skipped the line and were then given a council home.

The answer to all this, of course, is for the state to build a lot more social housing.   This stopped after the crash because the state was virtually bankrupt.

No social housing was built for years even though we had an ongoing high birth rate and had been through a period of high immigration.   It is now starting again but it will take several years to begin to catch up -- the government is committed to building over 3,000 social homes in the coming year.

Building more social housing is the only solution put forward by critics of the government, who say that at least 10,000 social homes a year need to be provided for the foreseeable future.   But it's not that simple, not only because of limited financial and labor resources.

Changing demographics, family make-up and lifestyles in today's Ireland all mean that the state may never be able to build enough social housing for all those who demand it.   The private sector will play more of a role in the future, as it does in other European countries.

Once enough building gets underway again here, the present housing shortage will ease and prices and rents will come down to more affordable levels.  And only then will our homelessness crisis end.