Collin Gillespie scored 14 points in the Villanova Wildcats' win over Delaware in the first round of the NCAA Tournament. 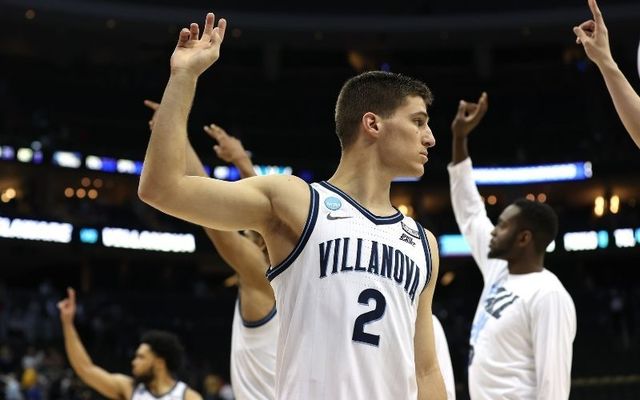 Collin Gillespie grew up in and around Philadelphia – his father was a cop in the City of Brotherly Love – and this month the sharp-shooter from Villanova is expected to be one of the biggest stars of March Madness.

Not just in Philly, but across the whole country.  Even though Gillespie is “only” six-foot, three inches tall.

St. Patrick’s Day means many things to many Americans.  Especially this year, since many of us have not been to a pipes-blaring, too-damn-cold parade since 2019.

But nearly as big a part of St. Patrick’s month is walking into your favorite Irish watering hole and watching – and betting on – the NCAA men’s basketball tournament.

Not long ago, before betting – sorry, “wagering” – got respectable, pub pools were glorious open secrets in joints like Jody’s on Staten Island. The legendary college hoops pool there regularly swelled into seven-figure territory.

This year’s March Madness tips off with government-approved bookies everywhere.  And under the receding shadow (we hope) of Covid, and the darkening shadow of war in Ukraine.

This means we have (temporarily) stopped shouting about the other kinds of madness that have bedeviled us for years: poverty, racism, immigration.

Basketball is supposed to be an escape from these things. But it could actually tell us a more inspiring story.

It is “an undeniable fact,” The New York Times noted a few years back, that such Catholic colleges have “long punched well above their weight.”

Is it because Catholic schools have money to throw around?

No.  LeBron James, of the St. Vincent-St. Mary Fighting Irish in Akron was not rich.

Neither was George Herman Ruth, whose German immigrant parents were so overwhelmed they sent seven-year-old “Babe” to St. Mary’s Industrial School, where Brother Matthias introduced the kid to baseball.

Once the awful barriers of racial segregation were torn down in the post-Jackie-Robinson years, Catholic school athletes participated in a fascinating, oft-forgotten integrationist experiment.

It featured the impoverished offspring of diasporas from Europe, the Caribbean, and Africa who settled in crowded urban parishes, played in CYO leagues, and graduated from newly-constructed Catholic high schools.

It was never easy or pretty.

But baseball was Abdul-Jabbar’s “first love.” To play he had to walk through Manhattan’s Good Shepherd parish, “which was all Irish,” he once wrote. Things got ugly.

But there’s more to this story.

By the 1980s, top urban athletes and coaches with roots in Ireland and Italy, Jamaica, and Africa, found themselves in what Irish American journalist Dana O’Neil called “the most entertaining and influential conference in college basketball history,” – the Big East.

At its best, this represents what Professor Timothy Neary has called “a cosmopolitan version of American Catholicism, one that is usually overshadowed by accounts of white ethnic Catholics aggressively resisting” racial integration.

Nearly 40 years later, Collin Gillespie may lead Villanova to yet another title.

Is it also too late to hope for something even more inspiring? More cosmopolitan rather than aggressive? Something beyond the madness?