Irish basketball player Aidan Igiehon is turning heads as he continues his collegiate sports career in the US - could he be heading for the NBA? 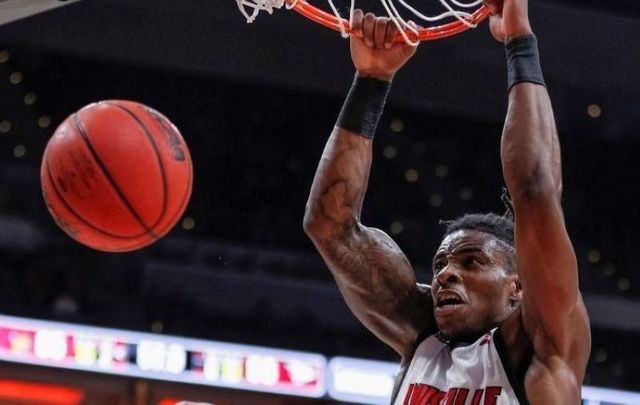 November 17, 2019: Aidan Igiehon, #22 of the Louisville Cardinals, dunks the ball during the second half against the North Carolina Central Eagles at KFC YUM! Center in Louisville, Kentucky. Getty Images

An Irish college basketball prospect hopes to "bring Irish basketball back into the NBA" so that nobody ever overlooks the sport in Ireland again.

Aidan Igiehon, originally from Clondalkin in Co Dublin, has been turning heads at Grand Canyon University after an injury-hit freshman year at the University of Louisville and some experts are beginning to tip him to make the grade in the big leagues.

The 20-year-old, who stands at an imposing 6 ft 10, only started playing basketball at the age of 12 but said that he quickly became "obsessed" with the sport.

He recently told the Irishman Abroad podcast that "something just felt right" when he first held a basketball and said that he never looked back after attending his first practice.

Igiehon soon caught the attention of prominent Dublin basketball clubs and had caught the eye of prestigious American high schools by the age of 13, just one year after he picked up the sport.

The Dubliner has earned a reputation since moving across the Atlantic, with American fans already labeling him "the Irish Hulk".

"The way I played, I played angry. I wanted to break the rim every time. So they were like, you know: 'You play like a hulk, like the Irish Hulk," Igiehon told the BBC.

Igiehon's impressive high school averages of more than 20 points and 15 rebounds per game turned heads and earned him a move to the Louisville Cardinals in 2019.

The young prospect has now set his sights on the NBA after overcoming a shoulder injury during early college basketball career.

"I'm here to win and to be the best athlete I can be, but my long-term goal has always been to be an NBA player.

"I want to bring Irish basketball back into the NBA."

For now, the Dubliner is focused on bringing Grand Canyon University to the NCAA and has made a promising start to life at the Arizona university.

If Igiehon does reach the lofty heights of the NBA, he will emulate former Orlando Magic and Phoenix Suns player Pat Burke by becoming just the second Irish-born player to play in the NBA.

Born in Tullamore, Burke moved to Ohio with his parents when he was three years old and played in the NBA for three seasons in a career that stretched all over Europe and North America.

Burke believes that it is only a matter of time before another Irish-born player makes it to the NBA.

"The diversity inside Ireland as a whole has changed, you're no longer looking at this stereotype that all Irish teams are going to be smaller," Burke told the BBC.

"We're going to see more players getting opportunities for scholarships and going pro, it's going to happen and when it does it will be a huge boost for the Irish game."