Anthony Edwards of the Minnesota Timberwolves says he wants to "learn how to talk like that" after hearing a question from Irish reporter Jim Conlan. 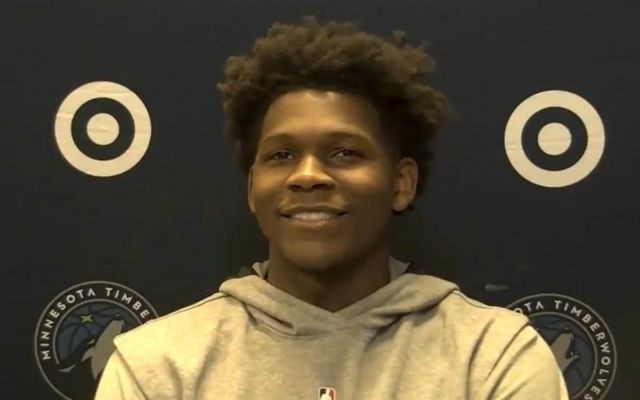 Anthony Edwards is a new fan of the Irish accent. @Timberwolves, Twitter

Anthony Edwards of the NBA's Minnesota Timberwolves is going viral today after his charming interaction with an Irish reporter.

Speaking after the Timberwolves’ 139 - 112 loss against the Milwaukee Bucks, 19-year-old Edwards, who was the number one NBA draft pick in 2020, fielded a question from Jim Conlan of Raidió Corca Baiscinn (RCB), a non-profit community radio station in West Clare in Ireland.

“Where you from, Jim?,” Edwards, clearly intrigued, asks with a grin on his face after Jim poses his question in the post-game interview.

“I like your accent - it’s tough. I wanna learn how to talk like that. But - ask your question again, I was too much listening to your accent.”

The video of the interaction, shared on Twitter by the Milwaukee Timberwolves, has been viewed more than 1.4 million times and liked more than 16k times in less than a day.

You can watch the hilarious exchange here:

Confirmed: Ant is a big fan of Irish accents 😂 pic.twitter.com/2ZJdShLgBK

The Timberwolves' tweet drew some generally heartwarming replies as well:

I encourage you to visit Ireland. The friendliest and most chatty people will welcome you and talk your ear off.

Tell Anthony, if he hasn’t figured it out already, he can make his Siri have an Irish accent. Highly recommended.

Ant more than welcome to come over and play championship during the summer. He'd run riot corner forward

That’ll earn him a lifetime of free pints in Ireland

the best part is that the Irish dude called the standings "the table" like he's taking to some striker from Dundalk who's about to face off against Longford Town.

The next @donie makes his debut!