Ireland is still living beyond its means

Relying so heavily on tax revenue from a handful of giant American multinationals is neither wise nor prudent. 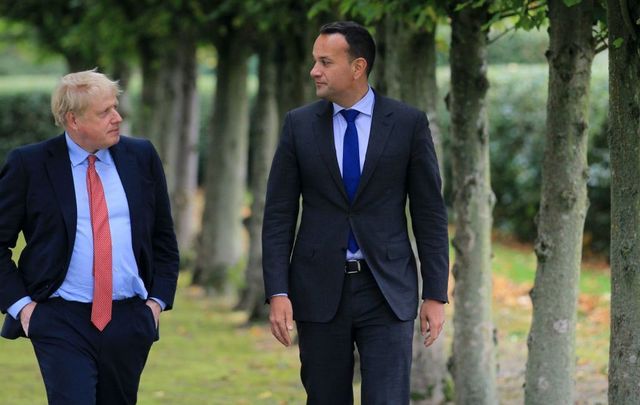 Is Ireland living beyond its means with high corporation tax and the uncertainty of Brexit?

Put away that champagne!  Last week's apparent breakthrough in the Brexit saga might seem to be worth celebrating, certainly after all the predictions of a No Deal.  But it's too early to say whether it's going to work.

At the time of writing the Democratic Unionist Party (DUP) is sounding very doubtful. Even more worrying, threats are emerging from loyalist paramilitary groups about resisting any deal which separates the North from the U.K. in any way whatsoever.  By the end of this week, things will be clearer.

But the reality is that despite the "path to progress" envisioned by Taoiseach Leo Varadkar and Prime Minister Boris Johnson at their meeting last week, a successful outcome in the talks is going to be very difficult to achieve. In particular, it's going to be a tough one for unionists to swallow, if the rumors about what is being discussed are accurate.

When you strip it down, the essence of the plan involves keeping the North aligned to all EU rules and standards for trade and also being part of a new customs partnership with the EU, the effect is to avoid the need for a border in Ireland.  In all but name, the North would remain a part of the EU Single Market.

Even more controversially, despite legally remaining part of the U.K. customs entity the North would also be tied into a special relationship with the EU Customs Union.

No matter what spin is put on this about the advantages of being part of both—and there would be advantages—it clearly means the North would be different to the rest of the U.K., something the DUP and hardline loyalists have vowed never to accept.  Which is why it's much too early to be cracking open the bubbly.   We'll just have to wait and see what happens.

In the meantime, we need to take a look at Budget 2020 which was presented to the Dáil early last week, preceding the Leo-Boris best pals show.  It was heavily influenced by the uncertainty over Brexit and ultra-cautious for that reason.

A soft Brexit with a deal would be challenging enough for us, but not a disaster.   A hard Brexit no-deal crash out by the U.K. would be infinitely worse for us, a scenario requiring major financial intervention by the state to limit job losses and lessen the catastrophic hit to our economy, particularly in the agri-food sector.

It was not surprising therefore that the budget last week did little more than tread water.  Until we know the Brexit outcome, framing budgetary policy for the year ahead is impossible.   So apart from a few tweaks here and there, there was little change.

There were no income tax cuts, even though the economy is performing strongly and revenue is rolling in.  And there were no changes in the main welfare payments and benefits which have seen increases each year in recent budgets.

Despite this, the budget provided for €3 billion in extra spending, but most of this is already committed to state pay and essential state services needed for our growing population.  Not only were there no tax cuts, but the failure to raise tax bands in line with inflation and pay growth means that many people will be paying even more tax in the coming year.

This caused considerable disappointment among the people who get up early to go to work every day, the very people Varadkar said he wanted to help when he became taoiseach. There was even more disappointment on the welfare and benefits side, particularly over the failure to give what in the last few years has become an annual €5 increase in the state pension.

There was loud complaining about this from the opposition and poverty groups, although the reality is that the state pension here is already more than 25 percent higher than it is in the U.K., and welfare payments are among the highest in Europe.

The Brexit uncertainty gave the Minister for Finance Paschal Donohoe an excuse for doing as little as possible this year. But the truth is that he should have been keeping a tight rein on spending anyway because the state is already living way beyond its means. Brexit is not the only dark cloud hanging over us.

Another serious threat is our heavy dependence on the huge amount of corporation tax we get from the big multinational companies here, mostly American, a bonanza we have been using to prop up current state spending even though there is no guarantee it will continue indefinitely into the future.

The amount of revenue involved in this and our dependence on it is scary.  In 2014, the corporation tax collected in Ireland was €4.6 billion.  Last year that had climbed to €10.4 billion and this year will probably exceed €11 billion.

It's now nearly 20 percent of all tax collected here.  Which would be grand (as we say here) if all that corporation tax was coming in from a wide variety of companies across Ireland. But it's not.  Almost 80 percent of it comes from foreign companies here, mainly the big American multinationals—Google, Amazon, Facebook, Microsoft, Airbnb, etc.

The top ten of these multinationals now pay nearly half of all our corporation tax.  Which means we have become hugely dependent on them and the revenue they provide. That might not be too worrying if we were using the money to build up a rainy day fund for the future or investing it in long-term development, infrastructure, etc.  But we're not doing that.

Instead, we're using a lot of it to prop up day to day spending by the state on everything from welfare to health care. All of this everyday spending quickly becomes the norm and is then seen by people as an entitlement.

So cutting it back when there is a sudden downturn in revenue becomes almost impossible, as we saw in the austerity years after the financial crash here a decade ago. Allowing the country to become so dependent on tax revenue from a small number of multinationals is a risky business.

And it's even more suspect given the wider context and the reasons so many of the big players are here. We like to stress that they're here because of our young, smart, English-speaking workforce and our position as a gateway into the EU market—and of course, everyone loves Ireland and the Irish!

There's some truth in all that, but the main reason they are here is our favorable tax regime.  Our long-standing 12.5 percent corporation tax rate is one of the lowest in the west and we insist that is never going to change.

Many US companies locate bases in Ireland to take advantage of the corporation tax rates.

In fact, some of the biggest American multinationals here end up paying less than two percent thanks to the various sweeteners and accounting wheezes we have devised to help them. We continually deny that we're a tax haven and claim we abide by all the international rules.

Maybe we do.  But the figures tell the real story. Even though some of the biggest multinationals here are paying only a fraction of our nominal 12.5 percent corporation tax rate, the amount they pay still added up to over €10 billion last year.

This shows that the overall level of profits they are running through Ireland is colossal.  The value of the tiny bite we take indicates that the pie is of enormous, with almost no tax being paid. It's not surprising then that other countries are demanding change.

In the last few weeks, the OECD issued a new plan which would force the multinational tech giants to pay their taxes in the countries where their products are sold rather than in a third country (like Ireland) where they book all their sales and profits and enjoy a special tax deal.

If that happens—and it makes a lot of sense—it will spell the end of an incredibly lucrative bonanza for Ireland, with a consequent severe impact on government revenue here. Although many of these companies are deeply embedded in Ireland, with their EMEA head offices here, a significant reduction in our tax attractiveness might see them gradually move elsewhere.

And in addition to that, there is uncertainty about our future after Brexit which could well affect how the big multinationals view their presence here. All of this means that relying so heavily on tax revenue from a handful of giant American multinationals is neither wise nor prudent.  With Brexit hanging over us, it may be excusable that this year's Budget did little to address this problem.  But in the next few years, we must tackle it head-on.

And inevitably that will involve learning to live within our means again instead of in the financial lottery land we inhabit at the moment.