Ireland's bland changing of the guard

While Ireland's historic change in Taoiseach and consequent cabinet reshuffle was anticipated, the event was "completely underwhelming." 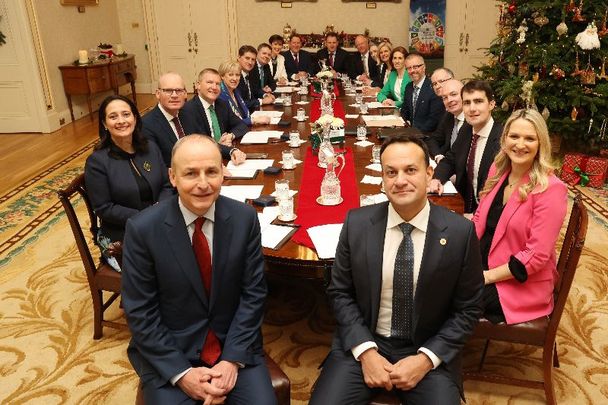 December 17, 2022: Taoiseach Leo Varadkar and Tánaiste Micheál Martin pictured with the newly appointed cabinet after ministers received their seals of office in Áras an Uachtaráin. RollingNews.ie

100 years ago, on December 17, 1922, British soldiers left their Irish barracks for a final time to be replaced by members of the Irish Army.

The handover went peacefully but it took place against the backdrop of a vicious Civil War fought over the terms of the Anglo-Irish Treaty. Just nine days earlier, four anti-treaty leaders were executed in revenge for the killing of pro-treaty TD Sean Hales.

So on the 17th of December 2022, exactly 100 years later, we had the peaceful transfer of the position of Taoiseach between the political parties that were born out of the Civil War. It was a moment that former President Mary Robinson had foreshadowed in her famous 1990 speech when she spoke of “people stepping out from the faded flag of the Civil War.”

Last Saturday was a truly historic moment that ended a century of bitterness and recriminations. For Fianna Fáil and Fine Gael, there can be no going back. They are now natural allies.

The event itself, however, did not live up to the billing. The change in Taoiseach and consequent government reshuffle was long anticipated, but like a lot of events associated with this administration, it was completely underwhelming.

From day one, two and a half years ago, the middle of December 2022 was set down as the date for a change in Taoiseach, and sure enough, as Micheál Martin stepped out of the post Leo Varadkar duly stepped in.

But what wasn’t predicted was the survival of a whole coterie of underperforming ministers who have contributed to low opinion poll ratings and public disquiet across a range of policy areas. The event could perhaps be described as a celebration of the mediocre, as there were no personnel changes among the 15 ministers, the maximum allowed under the Constitution.

Government spin doctors were quick out of the block to frame the event as continuity versus change, seemingly forgetting that the citizens actually want change. While it is true that major reshuffles generally can have a negative effect on the performance of a government, nonetheless different perspectives were definitely warranted in a number of departments.

Currently, homelessness numbers are at a record high, as are local authority housing waiting lists. In health, there continues to be an endemic problem with long delays for operations and overcrowding in accident and emergency departments.

Education has also been a disaster zone for this government, with Minister Norma Foley’s latest misstep being a short-lived suggestion to sort out the chronic teacher shortage by putting an end to career breaks, a proposal that barely lasted 24 hours, especially when it was pointed out that she herself was on a career break.

This comes on top of major school transport problems and a six-month wait by students for their exam results. Despite these problems, the ministers for housing and health and education remain in place.

The argument is that a new person in a department could take up to two months to get up to speed. The counterargument, of course, is that if a minister has not got to grips with the problems over two and a half years in office, they have surely run out of time.

The Green Party will be happy with the performance of their two ministers, and there still are some heavy hitters in the Cabinet in the departments of finance, enterprise, and foreign affairs. We can expect them to take center stage over the next period.

One person that exceed expectations was Martin, whose main achievement was to steer the country through the ravages of the Covid pandemic. In doing so, he managed to hold the three separate coalition parties together, a feat that involved a great deal of people and political skills. This won him praise from the leaders of his partners in government, Fine Gael and the Green Party, and a recent newspaper poll placed him as the most popular leader in the country with a 51 percent approval rating.

In taking over the Department of Foreign Affairs, Martin will have a major input into the ongoing crisis in Northern Ireland. His Shared Island initiative is seen by most observers as less of a threat to unionists who have always treated former Foreign Minister Simon Coveney with suspicion, feeling that his sympathies were too much with republicans.

The question, however, is what does the future hold for Martin? He has stated that he plans to lead Fianna Fáil into the next election, but there is a strong suspicion that he may bail out in 18 months and become Ireland’s next EU commissioner.

For the man coming in to take up the office of Taoiseach, Varadkar, it has been a challenging few months. He hit the headlines recently when a video of him out clubbing went viral.

To most, what a 43-year-old single man does in his free time is his own business, but some of his closest allies privately expressed some disquiet about his judgment. Certainly, sympathy was in short supply considering that Varadkar is constantly tweeting about his private life.

He also has been under pressure from the inquiry into confidential documents he leaked to a friend about a contract for doctors. While it was decided that no action was warranted, he got less than a clean bill of health from the inquiry. One independent expert noted that Varadkar’s assertions “represent low grade evidence at best,” while another said that his claims that the document was no longer confidential were not supported by his own statements or public records.

Varadkar now has the responsibility of delivering on government promises. With two elections, local and general, scheduled over the next two-plus years, there will be no room for failure.

Fine Gael has been in power for 12 uninterrupted years, a very long time in political terms. Varadkar has chosen not to reset the government at this time. In the circumstances, such a minimalist reshuffle is risky, and the resounding vote of confidence he has given his cabinet colleagues is not reflected in public opinion polls.

The new Taoiseach has commenced a charm offensive over the past couple of days, but he won’t be judged on fine words and worthy sentiments. Delivery is key to his future, and with past performance being the best indicator of future success it’s unlikely that the same old, same old will cut the mustard.

*This column first appeared in the December 21 edition of the weekly Irish Voice, sister publication to IrishCentral. Michael O'Dowd is brothers with Niall O'Dowd, founder of the Irish Voice and IrishCentral.