Halloween may have been invented by the Irish but it was the Americans who turned it into the spookfest it is today. 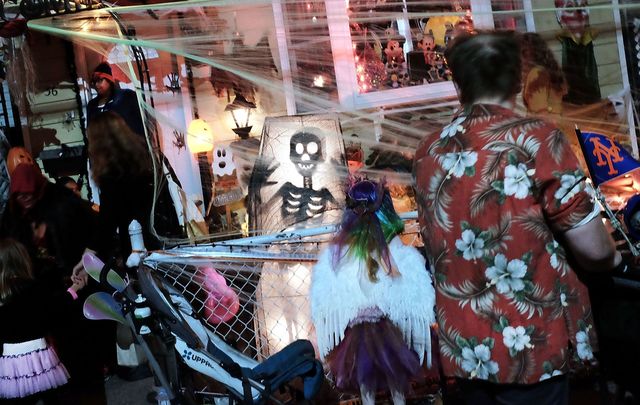 Halloween in Ireland has become more like the American celebration in recent years. Getty

Halloween may have been invented by the Irish, but it was the Americans who turned it into the spookfest it is today.

Halloween was invented by the Irish, but when I first moved here it wasn't that big a deal. Not when compared with the Halloween I remembered as a kid in Queens and upstate New York.

Back in 1995, I took my daughter out trick-or-treating for the first time and it was something of an eye-opener for me. We went to five or six houses and two houses handed the traditional Irish Halloween treats, an apple, and some nuts. The other houses had nothing.

Apples or nuts, that was the tradition here. Kids who rang the bell didn't say, "Trick or treat" they asked, "Any apples or nuts?" (The nuts are called 'monkey nuts' and are peanuts in their shells and are strangely unpleasant compared with the peanuts you get in America.)

There wasn't much of a tradition of dressing up either. Some kids might have thrown on something that their mother or father owned, but that was about it. Mostly what you had was youngsters with fireworks. And bonfires.

Read more: This Irish city is the capital of Halloween

Halloween in Ireland used to mean plenty of bonfires

Everywhere you went in the weeks before Halloween you'd see piles of garbage - empty boxes, mattresses, couches, loads of empty pallets, even car tires (Uggh) – waiting for the big night when the bonfire was lit.

There are still bonfires, but nowhere near as many as there used to be and they seem to be better controlled as to what can be added to it (no tires). Too disgusting, too many injuries and too much clean-up afterward for much of modern Ireland, which has mostly turned its back this tradition and I don't miss it at all.

The bonfires are gone (or going, anyway), but not the fireworks. The fireworks seem to be more extensive nowadays with a lot of fathers involved in putting on their amateur displays (bottle rockets & roman candles mostly). I could live without it.

The biggest change in Halloween is not the demise of the bonfire or the growth of the macho father fireworks shows, but the Americanization of the day. As Frank McNally put it in a column for the Irish Times, Ireland may have invented Halloween, but then "we exported the cheap raw materials for the festival, lacking the inclination or wherewithal to process them ourselves. Then the Yanks developed the ingredients into a more sophisticated product, with slick packaging, and exported it back to us at a large markup."

Which is true. Ireland now has a version of the Halloween I remember as a kid. Decorations on the windows, pumpkins carved out as jack-o-lanterns and kids in costumes – generally store-bought – going door-to-door collecting chocolate bars and other candy. Apples and other fruits are frowned upon as are the dreaded monkey nuts.

The whole adult Halloween thing has even caught on here too, although that's always struck me as kind of creepy. Halloween was and should be, for kids.

So, we have an American Halloween, although so far we don't have the religious, political, excessively child-protective objections to the day that seems to have ruined the day for kids in towns across America. Not yet, but I expect to start hearing that stuff any day now.

You can read more about Halloween and its Irish connections here.