The National Public Health Emergency Team and Chief Medical Officer Dr. Tony Holohan are reportedly concerned over a rise in Delta variant cases in Ireland and are willing to keep Ireland's indoor hospitality sector closed for another month as a result. 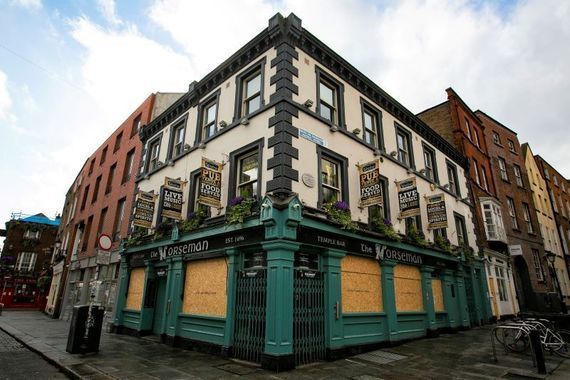 The Norseman pub in Temple Bar in April 2020. Some Irish pubs have been shuttered since March last year. Rolling News

As concerns over the Delta variant continue to rise, it now appears increasingly likely that the next phase in Ireland's reopening on July 5 is set to be pushed back.

It is a decision that defies logic or common sense and will serve to further alienate a hospitality sector that has been brought to its knees over the past 16 months.

The National Public Health Emergency Team and Chief Medical Officer Dr. Tony Holohan are reportedly concerned over a rise in Delta variant cases in Ireland - a strain of the virus that is thought to be more transmissible, but more research is required to confirm whether it is more dangerous.

In response to this rise in Delta variant cases, Holohan and NPHET are reportedly pushing for the reopening of indoor dining to be delayed until August.

It is a baffling response at a time when there are just 43 COVID-19 patients in Irish hospitals and 13 patients in intensive care.

HSE CEO Paul Reid has additionally confirmed that close to four million doses of the COVID-19 vaccine have been administered in Ireland, while more than 40% of the adult population have received both doses of the vaccine.

Ireland's recent success with the vaccine rollout means that virtually all vulnerable people have been fully inoculated against the coronavirus, and data emerging from the UK shows that the vaccines are even more effective against the Delta variant than they are against the original strain of the virus.

In contrast, the vaccines are 93% effective at preventing hospitalizations among people diagnosed with the Alpha variant and 78% effective when just one dose has been administered.

However, NPHET is still pushing to delay Ireland's reopening because that is their solution to everything.

It is frankly staggering that the top medical officials in the country are unable to come up with any better solutions than lockdowns 18 months after the emergence of the coronavirus and it has made Ireland the laughing stock of Europe.

Ireland, which has closed indoor dining since December, is the only country in Europe that continues to ban indoor dining at a time when several European countries are trialing multi-thousand spectator events.

However, Ireland's regulations are highly contradictory. Indoor restaurants and pubs in hotels are permitted to reopen in a hugely unfair ruling that discriminates against pubs and restaurants that don't have the space to offer outdoor dining. People are also permitted to eat popcorn and other snacks in the cinema, which is technically eating indoors.

The Irish Government has given banal platitudes about "Living with Covid" throughout the pandemic, but it has done nothing but hide from it, making it extremely difficult to look on as the rest of Europe enjoys a swift return to normality.

Several EU nations are currently allowing tens of thousands of spectators to enter stadiums during the ongoing Euro 2020 soccer championships, showing faith in their vaccination rollout and their contact tracing systems.

Denmark, for example, which has vaccinated fewer people per capita than Ireland, recently allowed 25,000 fans into the Parken Stadium in Copenhagen for a Euro 2020 match between Denmark and Russia.

The 38,000 seater stadium was two-thirds full on Monday night, but only three cases of the virus were linked to the event.

Dublin's Aviva Stadium was due to host four games at Euro 2020 in what would have been a historic moment for Irish soccer.

However, NPHET and the Irish Government were unable to guarantee that the Aviva Stadium would be 25% full for the games, prompting European soccer's governing body UEFA to take the games elsewhere.

As a result, Ireland missed out on hosting a mammoth encounter between England and Germany on Tuesday night, which will now take place in London's Wembley Stadium.

But Ireland is not like Denmark or other European nations that are hosting matches at Euro 2020. The Danish Government has introduced a rigorous free antigen and PCR testing system and Danes go for regular tests and use negative results to access bars, restaurants, and other public spaces.

The Irish Government, on the other hand, has shown no such sensibilities and continues to govern with ineptitude, while its sole coronavirus strategy is still rooted in lockdowns and pushbacks.

It is unfathomable that the reopening of Ireland's indoor dining should be delayed any further than July 5 and any decision to delay it until August should be met with widespread public indignation. It is time to start living again.