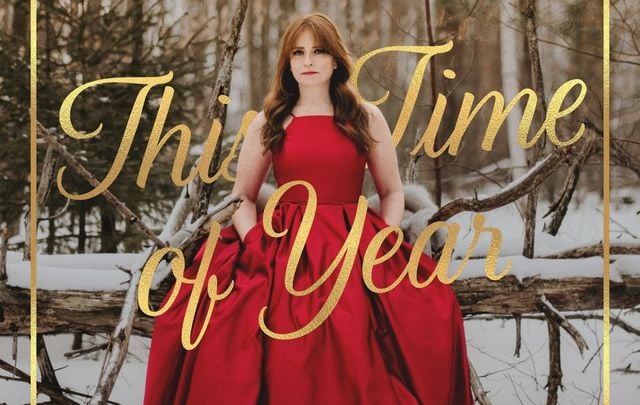 When you hear a truly outstanding singer you never forget it. Cork-born singer Maxine Linehan is one such singer and her new album, This Time of Year, is perfectly crafted to address the unique complications of a 2020 style Christmas.

First of all, it's a sonic marvel. The album features an impeccably chosen selection of holiday songs that are beautifully sung by Linehan, and the producing talents onboard include Andrew Koss, Ryan Shirar, Grammy Award nominee Felix McTeigue, Grammy winner Kevin Killen, and Grammy winner Bob Ludwig. These heavyweight contributions mean this is her most flawless record, but it's her vocals that really shine.

“We set ourselves up for holidays that are all the clinking of glasses and cheer and celebration,”  Linehan tells the Irish Voice. “And of course we want to feel that, but we can't deny the trickier emotions that can pop up at this time of year too.

“I think this year more people than ever are feeling mixed emotions, and if you brush them under the rug you're going to have a lumpy rug. So it's better for us to address them and feel them. And I think that's what this album allows you to do. I want to offer some condolence or comfort this year.”

The songs she has selected here certainly do that. The title track manages the trick of sounding like a Christmas song and a Broadway 11 o'clock number simultaneously. It's magic. Linehan sings it like she owns it and indeed she does.

She doesn't shy away from the Matterhorn of Christmas songs, “Have Yourself a Merry Little Christmas,” indelibly sung by Judy Garland. You need confidence of a kind that is rarely seen nowadays to tackle this, the greatest of all holiday tunes, and yet instantly Linehan makes it her own.

There's ache hidden in the heart of Christmas for all the people who are no longer at your table and that awareness is all over this record. The phrasing, the emotion, the clear notes contained in it, the voice singling out like a bell. You can literally hear in her voice what the songs mean to her.

“I'm a parent. Now we put up this huge Christmas tree and we do all this amazing stuff. And I sit at the Christmas table and I look at my children and I just, my heart breaks that my mother and my father are not here to witness it and they never will be,” Linehan says.

“And that deep sadness is something I also inherited from my own mother, because she felt that exact loss of not having her mother around Christmas too. There's different layers to it. This year we're all physically restrained from being with the people that we love, but you know this has been true for immigrant for decades, the people that have come to America from wherever in the world.”

This is not your ordinary Christmas album in other words, and it's not just a collection of jingly throw-away holiday songs. These songs spell Christmas like the last mile home. You'll know it the moment you hear it.

It's Linehan's most accomplished record to date and that's saying something.