A tale of two winter White Houses, Truman's and Trump's 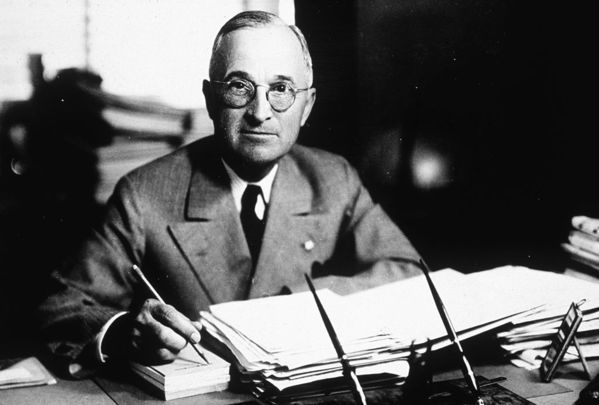 In his first year, he took some of the most historic and far-reaching decisions of any president ever, overseeing the ending of the war in Europe in his first two months.

Then he participated in the conference at Potsdam to govern defeated Germany, whilst laying the groundwork for the final stage of the war against Japan. The fate of the world was on his shoulders and he felt it. The buck, he famously remarked, stops here. 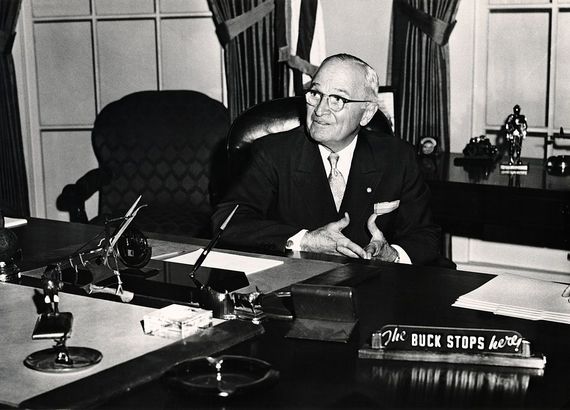 This first year of Truman’s presidency saw the founding of the United Nations and soon led to the development of NATO, as America's relationship with the Soviet Union continued to deteriorate.

Truman established the Central Intelligence Group in 1946 which would become the CIA a year later. He oversaw the creation of the Department of Defense. Every effort he made was made to protect and consolidate America's standing.

But there was so much more to his legacy. Truman, a Democrat, also gave us the Marshall Plan (so named to get it through a Republican-controlled Congress) to revive the economies of hard-hit European nations and halt the spread of communism there. 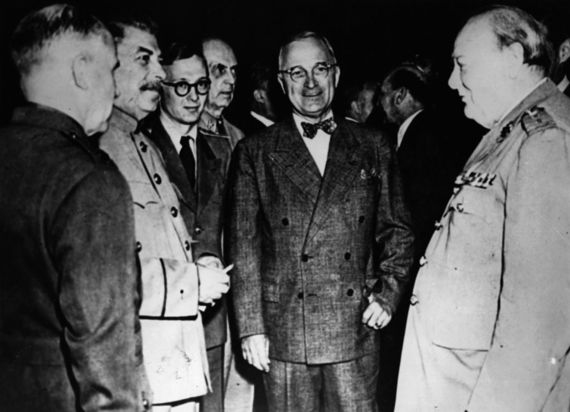 President Harry S. Truman meets with Joseph Stalin the Soviet leader and Winston Churchill at the Potsdam Conference, circa 1945.

He achieved a robust peacetime economy, although the GOP controlled Congress resisted his desire to build on the successful legacy of the New Deal. He was decades ahead of his time on issues of social change.

During this Black History month, it is inspiring to remember that president Truman issued the executive orders that desegregated the armed forces and he forbid racial discrimination in Federal employment.

He also established a Committee on Civil Rights and encouraged the Justice Department to argue before the Supreme Court in support of plaintiffs fighting against segregation.

These were good works, done without hope of reward, and fiercely resisted by many.

I bring him up this week, and I ask your patience for this long-winded history lesson because I visited the house that was his sometime home in Key West, Florida last week. Known now as The Little White House, it was Truman's home for 175 days and 11 visits during his presidency.

In November 1946, Truman had finished 19 punishing months in office and was exhausted. His alarmed doctor immediately ordered a vacation somewhere warm. Realizing that where he was the White House was his correspondence was soon being headlined “The White House, US Naval Station, Key West, Florida.”

The place he chose for his winter White House is modest and unpretentiously decorated. Truman's presidential desk is, by the standards of our own flashy current presidency, tiny. There are separate bedrooms on either side of the second floor because he didn't want urgent phone calls waking his wife up in the middle of the night.

These days The Little White House is a busy public museum. You can take an inspiring tour through its unimposing two stories in less than an hour. You can see where Truman made decisions that changed the world's history. You can do it for just $20.

Trump's Mar-A-Lago report will never be toured for $20 by an average American.

Some people including the president himself call Mar-a-Lago, Trump's flashy Florida resort, The Winter White House. But you won't ever see it for $20. Membership at the Mar-a-Lago Club requires a $200,000 initiation fee and the golden interior decorating style suggests Saddam Hussein far more than it does FDR.

Ordinary people are not seen within its walls of course unless it's to fold sheets or make the beds for plutocrats. Nor, it's safe to say, will any decision ever be made there to uplift the nation or the common man or woman, although Trump did sign a successful bill to give billionaires more tax cuts.

Walking through the first and the greatest winter White House last week, the era of Truman, his modesty, his ambition, and seriousness, as well as his concern for the common citizen, felt so long gone.

We no longer have a presidency, we have a quasi dictatorship, we have a leader who thinks that the buck always stops with someone else..

One thing is for certain, ordinary Americans will never be welcome to walk through the gilded halls of Mar-a-Lago the way they do through Truman's Little White House. They don't now and they never will.