Whitey Bulger was a monster, not a folk hero say writers Casey Sherman and Dave Wedge. 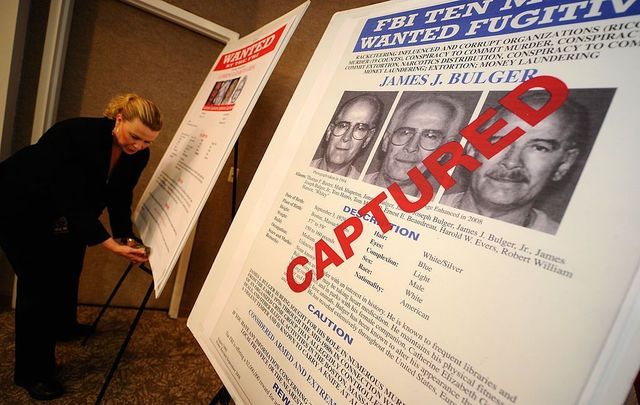 In their new book, "Hunting Whitey: The Inside Story of the Capture & Killing of America's Most Wanted Crime Boss", which includes never before seen information about Bulger's capture and killing, they want to demythologize Bulger's legend for the last time.

Why does Whitey Bulger still fascinate? Because, whether or not it's clear, he's as American as apple pie.

An Irish American hoodlum from the means streets who takes a short cut to getting ahead, every generation throws up multiple versions of this immigrant on the make tale, though few were as successful at their peak as this cold-hearted sociopath.

First imprisoned in the notorious Alcatraz prison in San Francisco Bay, the place he later called his alma mater, a sort of Harvard University for crooks, his long career as a distinguished hoodlum was virtually assured. His brother Billy Bulger took a different path through, ending up becoming Senate president of Massachusetts and the most important politician in Massachusetts.

Read more: Was Whitey Bulger's murderous life down to LSD testing by the CIA?

But one person who completely impervious to the Bulger mystique, Sherman and Wedge remind us, was Agent Noreen Gleason of the Boston FBI. Noting that the cold case department of her office had become demoralized and depleted after the scandal of Bulger's flight and ashamed of all the inside help he had received from agents in her own office, she shook things up in 2008 by ordering new hands to take over the old files.

Raised in the Great Depression, the son of an Irish born immigrant, Whitey's brother has talked candidly to the writers for the first time in years, telling them of his older brother's fascination with the 1920's gangsters Bonnie and Clyde (foreshadowing his own on the run future with Catherine Greig).

Bulger was an ardent student of American history and so the authors here reproduce a 2014 letter he sent to a friend: “Two of my favorite outlaws, Bonnie and Clyde, died together, shot down...” You can hear the hint of romance in his tone. “Gone but not forgotten,” he concludes.

Whitey wasn't academic like his brother, it was on the streets that he excelled. His petty crimes graduated to bank robbing and eventual imprisonment, where he cooled his heels as a three-year Irish gang war left 56 gang members dead. Bulger spent those years reading Machiavelli and dreaming of returning to Boston to run the crime scene.

Gangsters have always been the underside of the American Dream. Rising from humble beginnings to fortune and a certain kind of fame, on the way up they can become shadow celebrities and sometimes even folk heroes, as well as the most dangerous examples of the rags to riches story we know so well.

What separates a successful CEO from his perch above Wall Street from a crime boss like Whitey Bulger? Both can leave a trail of bodies on their way to the top, though in Bulger's case they were literal murders. Both can find themselves feted or criticized by the nation, depending on who's talking, and what's in it for them.

But Bulger seemed to corrupt everyone he encountered, including some of the federal agents investigating his case. The reputation of the Boston FBI office is still recovering from former agent John Connolly's ruinous decision to conspire to help Bulger eliminate his rivals.

In fact the scandal ran so deep and the legacy was so long-lasting that few believed the Bureau was serious in its quest to bring Bulger to justice, after a tip-off from within it had allowed him to take flight in 1994. Now a new book is offering the final word on the whole eye-popping affair.

With exclusive access to more than 70 prison letters written by Bulger himself, including never before seen photos of his arrest and interviews with dozens of people connected to the case on both sides - including Bulger’s own brother William Bulger and his accused murderer, Freddie Geas - Boston based reporters Casey Sherman and Dave Wedge have written a compelling new portrait of one of the most infamous criminals in American history in "Hunting Whitey: The Inside Story of the Capture and Killing of America's Most Wanted Crime Boss" (Morrow, $28.99).

Sherman and Wedge are probably best known for their book about the bombing of the Boston Marathon titled "Boston Strong: A City's Triumph Over Tragedy," which later became the 2016 film Patriots Day starring Mark Wahlberg.  With their background as award-winning journalists in the city they know the pulse of Boston and what makes it run and that insight can be seen on every page of this new book.

The authors of this book find Bulger's brother upfront about his wish that Whitey had not resorted to crime, but more evasive when it comes to what he knew about his movement when he was on the lam.

Interestingly it was Teresa Stanley, his old and abruptly scorned girlfriend, that began to serve up the information that would lead to his arrest. Thrown over for the much younger Catherine Greig, her thirty-year relationship with Bulger had left her with nothing to show for it but relentless visits from federal agents and a fear for her own life.

Stanley finally admitted to an agent that Bulger had been going by the false name of Thomas Baxter. That information led to a license plate check that detailed all the places his car has been seen, a crucial piece of information that ended speculation he had traveled abroad, and that began to piece together his life on the run.

Sherman and Wedge write about Bulger's weird contradictions. The man who thought nothing of killing people could not bear to see animals abused or even fish caught on the end of a fishing line. He warned kids about a life of crime yet was one of the most notorious criminals of the 20 century.

He could not have stayed off the radar that long, and against multiple leads if someone at the Bureau had not wanted him to remain a fugitive, Sherman and Wedge suggest. Perhaps he had more secrets to reveal and more names to name than many imagined. Perhaps the hit to their department's reputation was the determining factor, or perhaps it was something worse. Nobody trusted anybody when it came to the Bulger investigation.

On the run he rarely ever relaxed. One-stop in Los Angles was interrupted by the sound of helicopters flying over his hotel room. This is it, he told himself, it ends here. But it turned out to be the police in pursuit of O.J. Simpson. Facing nineteen murder charges and one of America's most wanted fugitives, he had every reason to expect his day would come.

Noreen Gleason changed the game when she took on the case in 2008. First she concentrated the minds of her newly assigned team, then she provided the leadership they needed to mount a successful search.

In Hunting Whitey: The Inside Story of the Capture and Killing of America's Most Wanted Crime Boss Sherman and Wedge lay it all out, the years on the run, the capture and trial, Bulger's murder in 2018 and the aftermath. Their goal is to puncture his myth and to focus on the men and women who brought his to justice and in this they have succeeded.

Read more: The tragic tale of America’s most disturbed family