Director Ciaran O’Reilly on why he decided now was the perfect time to tell the story of a powerful man whose rise and brutal fall are built on power, corruption and lies. 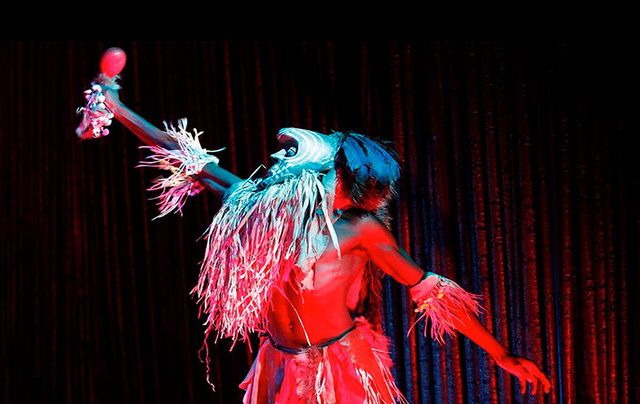 A still from The Emperor Jones.

The Irish Repertory Theatre is reviving its critically acclaimed, sold-out show The Emperor Jones for a limited engagement beginning March 1. One of Eugene O’Neill’s most unsettling plays, it explores the rise and terrifying fall of a cruel tyrant. Cahir O'Doherty talks to director Ciaran O’Reilly about why he decided now was the perfect time to tell the story of a powerful man whose rise and brutal fall are built on power, corruption and lies.

The slow rise to political power is Irish American playwright Eugene O’Neill’s subject in The Emperor Jones, as is the terror of suddenly losing it all.

Both sides will get a hearing on the Irish Repertory Theatre’s stage in its welcome revival of a sold out 2009 production (this time starring British actor Obi Abili as Brutus Jones) beginning March 1.

“The social and political climate of 2017, combined with the immense talent of Obi Abili, implored us to revisit this play, and to do so as soon as possible,” Irish Rep co-founder and producing director Ciaran O’Reilly, who will direct the revival, told the Irish Voice.

It’s unarguably a good time to reflect on how one man can see his own star rise by exploiting the fears of others. But in The Emperor Jones O’Neill doesn’t just chart his rise and fall in this world -- he also delves into the haunted subconscious of his slippery subject, making his examination of the cost of getting and losing power a striking parable for our own time.

“In the times that are in it I could not hit on something that I thought had more to say,” says O’Reilly. “It was a very successful show in the past and I don’t think it reached its full audience when we closed it. It was sold out for the entire run and we were turning away people who wanted to see it. Then I met a wonderful actor named Obi Abili who I thought could take over the role and do it.”

Obi Abili will play the title character in The Emperor Jones at the Irish Rep.

The Emperor Jones is about a man who assumes the throne based on lies and bull and razzamatazz and a lot of fear, O’Reilly continues. “Even though it’s about a black man in a Caribbean island at the turn of the century, it has lines that just reverberate with today’s newspaper headlines.  It’s just extraordinary.”

Undaunted, O’Neill followed up this provocation with another Expressionist play called All God’s Chillun’ Got Wings, in which a black actor kisses a white one onstage, causing uproar.

“The outrage that kiss caused was unbelievable at the time. At the time that play was produced the Klu Klux Klan had five million members,” O’Reilly says.

“The hate and abuse O’Neill had heaped upon him from well-known and respected people – it wasn’t just hicks -- was remarkable. Society was shocked by him pushing for that kiss to happen.”

Those who want to wear a mask have to wear it, that is their punishment, wrote Oscar Wilde once, in a line that O’Neill’s play strongly echoes. Says O’Reilly, “The whole thing about The Emperor Jones, the lines that land for me, include a moment when his henchman says to him, ‘But you’re breaking laws yourself.’ And his reply is, ‘Well, ain’t I the emperor?’ The laws don’t go for him.”

There’s been no crude attempt by the Rep to plaster contemporary themes onto O’Neill’s play, but there’s no need. O’Neill wrote themes that were profoundly human and because of that, they are enduring.

The fact is that it’s time for the Irish, at home and abroad, to finally get to grips with O’Neill. Widely thought of as America’s greatest playwright, his work is sadly less produced in Ireland where, though a familiar osmosis, he is more often thought of as a Yank than a fellow countryman.

So the Rep is to be applauded for consistently focusing on his value to wider the Irish narrative. O’Neill was one of us, in his outlook and temperament, in his sensitivity and cunning. The interior life of his characters is full of the unsaid, although barely concealed, in a way that looks and sounds inherited. Even his melancholy finds its echo in us.

“The one thing that people don’t recognize about him, he famously said this himself, is that he’s Irish,” says O’Reilly. “How much that informed how he lived and what he wrote. Even on superficial terms, what got him into the theater was going to see the Abbey Theatre players in 1911 when they were touring in New York. He went to see them night after night.”

To see Yeats and Synge and the playwrights of that time onstage had a profound effect on the young playwright. The experience was life changing.

“It was seeing the Irish players,” O’Neill said later, “that gave me a glimpse of my opportunity because they demonstrated the possibilities of naturalistic acting better than any other company.”

Ireland gave O’Neill the key that unlocked his genius. Then it largely ignored his mighty contributions because of an insular parochialism that could not or would not admit the work of anyone not actually present on the island.

O’Neill’s father was a sort of an Irishman on stilts. Born in 1847, the darkest year of the Great Hunger, he was famous for his melodramatic stage persona and not quite as well known for his depression and melancholia he exhibited at home among his intimates.

All his life O’Neill’s father lived in great terror of ending up in the poorhouse, a fear that had marked his hardscrabble Irish childhood, so although he became celebrated and successful he spoiled his own life with anxious forebodings that haunted him till his dying day.

In O’Neill’s greatest plays, the living haunt each other in a way that is unmistakably generational and Irish, springing from a legacy of privation and hard severance. It’s quite remarkable, given all this, that we have known about his work for almost 100 years and have failed to fully grapple with his Irish legacy.

“In The Emperor Jones the character pulls himself up by his bootstraps,” says O’Reilly. “He gets in with the traders of the time, gets to know everybody, rises to power and becomes the leader of this country. He does it in corrupt brutal ways and then he gets his comeuppance.

“O’Neill could have just left it at that and it would have been an amazing story. But he doesn’t. He takes this guy on a run through the forest where he meets with the ghosts of his past. He goes back into slave auctions and ancestral memory in Africa. The sins that heap upon sins that brought him to the heights of his career. What made him, what formed him, and at what cost?

“O’Neill takes him into the darkest recesses of his own past and his own brain. It’s astonishing to me. I’m directing it and I find the work astonishing.”

Performances of The Emperor Jones are set to begin March 1. The show will play through April 23.  Visit www.irishrep.org for tickets.