Home for unmarried mothers and their babies held dark secrets. 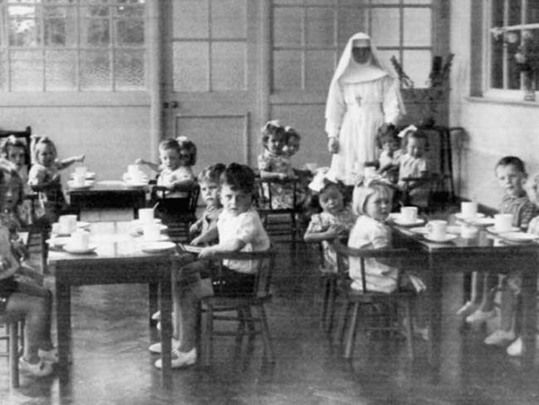 According to a report in the Irish Mail on Sunday, a mass grave has been located beside a former home for unmarried mothers and babies in County Galway. The grave is believed to contain the bodies of up to eight hundred babies, buried on the former grounds of the institution known locally as “The Home” in Tuam, north of Galway city, between 1925 and 1961

Run by the Bon Secours nuns, “The Home” housed thousands of unmarried mothers and their “illegitimate” children over those years.

According to Irish Mail on Sunday the causes of death listed for “as many as 796 children” included “malnutrition, measles, convulsions, tuberculosis, gastroenteritis and pneumonia.”

The babies were usually buried without a coffin in a plot that had once housed “a water tank,” the report claims. No memorials were erected, the site was left unmarked and unmourned.

The staggering mortality rate of “The Home” was apparently replicated elsewhere in Ireland.

The Sean Ross Mother and Baby Home, portrayed in the award winning film “Philomena” this year, opened in Roscrea, County Tipperary in 1930. In its first year of operation 60 babies died out of a total of 120, a fifty percent infant mortality rate, more than four times higher than in the general population at the time.

Statistics show a quarter of all babies born outside marriage in the 1930’s in Ireland died before their first birthdays. As observers have remarked elsewhere, these were infant death rates from the 17th century.

In one year alone in the mid 1940’s in the Bessborough Mother and Baby Home in County Cork, out of the 180 babies born 100 died.

Given the shockingly high mortality rates, it is hard not to conclude that the destabilizing threat these children represented to Irish society and its conservative religious ethos may have contributed to their untimely demise.

If 60 babies died in first year of the Sean Ross Abbey home alone, it’s a mathematical probability that hundreds more deaths could have occurred in the decades that followed (an estimated 50,000 babies were born in mother and baby homes throughout Ireland before they closed in the 1990’s).

Sean Ross Abbey was just one of the many mother and baby homes operated in the state, but the “illegitimate” stigma was not confined to Catholics alone. Reports show that 219 infants died in the Protestant Bethany home in Rathgar, County Dublin between 1922 and 1949.

As “Philomena” shows, many of the children who survived in the mothers and babies homes were later forcibly adopted, most often to the USA. Between 1945 and 1965 more than 2,200 Irish infants were forcibly adopted, an average of 110 children every year, or more than two a week.

Church officials have consistently denied that they ever received payments for these adoptions, insisting many of the papers and documents from that period were lost in a fire.

Since there was simply no question of the birth mothers keeping their children – the shame was thought too ruinous – they lost all future claim to them. Their punishment was to work without wages for two or three years in atonement for their sins. In the homes they wore uniforms at all times, they had their names changed and they had their letters censored.

Critics contend that the ongoing reluctance of Irish religious orders to hand over their internal records or compensate past victims of mothers and babies homes, Magdalene laundries and reform schools, can be traced to their alarm over being compelled to offer mandatory payments or fear that further horrors could come to light.

But calls for investigation of the various sites are growing. In the end, critics say, it should fall to the state itself to open the unmarked graves and count the dead.