"Look! It's a Woman Writer!" will aid the journeys of everyone who encounters it, women and men, straight and gay, young and old. 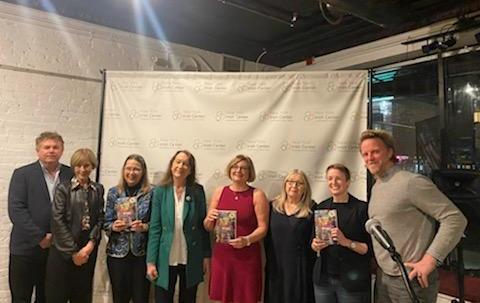 Attendees at the launch of "Look! It's a Woman Writer" at the New York Irish Center. NYIC

21 writers born in mid-century Ireland are the subject of 'Look! It's A Woman Writer!' a collection of new essays edited by the novelist and short story writer Elise Ni Dhuibhne

Finding your voice in a conservative country that worked to marginalize and contain dissent of any kind is a major victory in itself, as the writers of these luminous new essays frequently confirm.

To celebrate the book (which was shortlisted for the An Post Irish Book Awards) the Irish Consulate and Invest Northern Ireland, in association with the Irish American Artists and Writers Group and the New York Irish Center (NYIC), hosted Sophia Hillan, Ivy Bannister, Eilis Ni Dhuibhne, Anne Devlin (four of the contributing writers) and moderator Yvonne Cassidy - with a special introduction on the night by Consul General Helena Nolan. 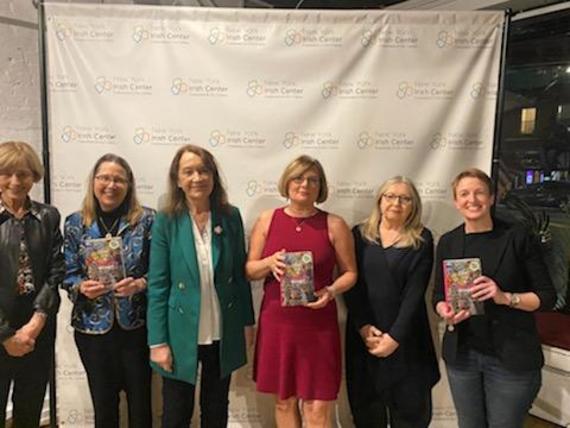 In spirited conversation after the reading, the four writers spoke of the dramatically changed social conditions in contemporary Ireland, many of which have been so progressive that a visit to the United States can now feel like taking a backward step, Ivy Bannister admitted.

In their college days, writers like Sophia Hillan noticed that their university departments were staffed almost entirely by men, reflecting their own tastes and sensibilities, a reality that she and others immediately pushed back against.

Referencing Martina Devlin's introduction in the book, the panelists then noted how the free secondary school Education Act of 1967 transformed lives of women in the Republic. At the time it was introduced, about a third of children who finished primary school in Ireland dropped out of their education.

By 2021, Ireland has one of the highest rates of secondary level completion in the European Union, with more than 90 percent of the population completing the graduating school exam known as the Leaving Cert. 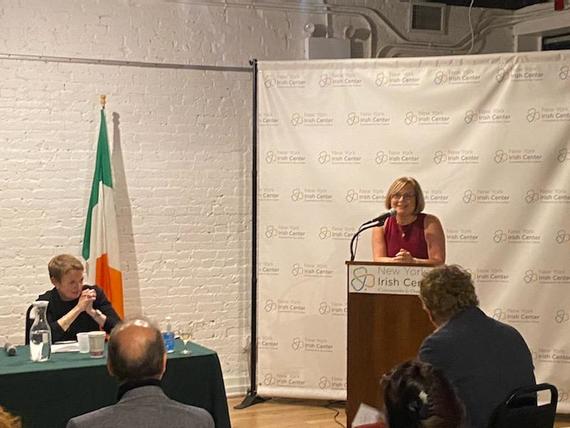 Consul General Helena Nolan and Yvonne Cassidy at the launch of Look! It's A Woman Writer!

Girls were an obvious beneficiary. Before the Act, they were considered a poor investment, since many would marry and forgo professional careers. After the Act, they suddenly had more options. It may not sound like much, but in a way, it was what Anderson calls “a silver bullet,” heralding a revolutionary change.

For most of their adult lives, the Irish feminist revolution has often been rather slow-moving. With the war in the north and the reactionary referendums in the south in part defining a generation of the women's struggle, progress was not always rapid or progressive.

And in fact, this panel event may have been the first time that many of the audience had ever seen a group of Irish women writers invited to tell their own stories, on their own terms, anywhere, ever.

For that reason, it is to be hoped that the consulate in association with the other Irish and Northern Irish groups here will make panels of Irish women writers an annual or better yet biannual event in the Irish calendar, because it quickly became obvious on the night how vital and insightful the conversations they inspire among the panel and in the audience are. 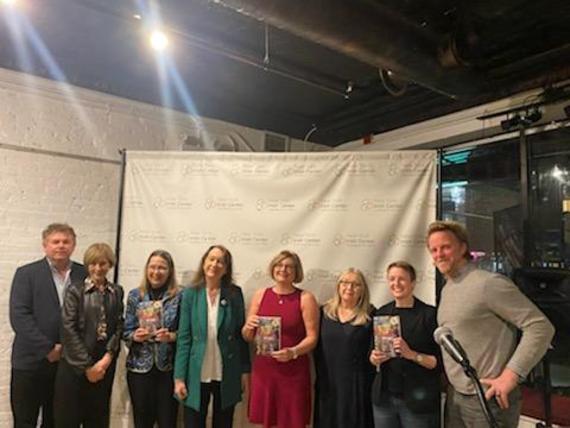 Hillan spoke about a life-changing experience when she was 25 when, after a successful cancer operation, she was introduced by a doctor to his students under her married name and with all the detachment of a science exhibit. In reclaiming her maiden name - and in a real sense herself – she spoke of how she formulated her successful plan to be a published author by the age of thirty.

Resolve of this kind is everywhere to be found in this whip-smart collection of essays. In speaking about what has aided their own individual journeys, this collection will also aid the journeys of everyone who encounters it, women and men, straight and gay, young and old.