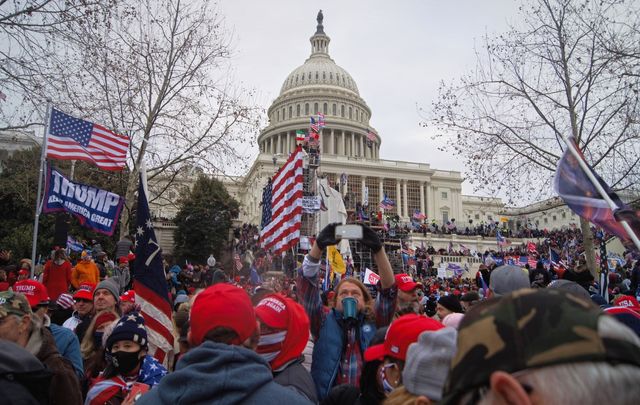 Always pay attention to people and groups who are trying to make you angry about some issue that otherwise you would probably give no thought to at all.

The American far-right has made it clear they have a long list of groups and things they don't like: LGBT people, feminists, abortion rights, non-Christians, Hollywood, Disney, a library full of targeted books, films, advertising campaigns, and public events - anything that approvingly shows the diversity of modern life in the United States.

How do they turn back the clock on such a tidal wave of positive social progress? How do they persuade smart people to return instead to the brutal social conditions of 1900 and before?

Well, they got smart. They started to broadcast their let's go back-to-the-future message on all frequencies. They had to capture the megaphone, the media, the public imagination, the public square, and now even the nation's courts.

Many fondly believe that for decades, the American far-right operated in the wilderness. I do not believe that at all. In fact, they were doggedly trailing our footsteps, positioning themselves right in the center of things, waiting patiently for the day they could literally body-snatch the airwaves, the internet, the courts and politics, and public life.

The American far-right has played the long game. Worse, they have played it well. They know that most ordinary Americans won't sign up to simply hate other people based on their country of birth, the color of their skin, their beliefs, or their religions.

They know that the majority of ordinary Americans will support a woman's right to choose whether or not to have an abortion, they will support legal equality for their LGBT friends and relations by overwhelming numbers, including marriage equality, which is now supported by a whopping 71 percent of us. The far-right know they can't win if they tell you exactly what they actually plan to do.

So instead they fight their enemies – which is most of us - by proxy. Instead of telling you they want to make being LGBT illegal (which is their true aim) they say look at those nasty drag queens reading fairy tales to children at the local library.

They will tell you that something supremely innocent and funny is really something evil. That big clown in the dress and make-up is secretly grooming your kids, they insist. They will want you to be deeply angry about it because your anger actually helps them, because it fools you, so that you don't understand you're actually being played.

Get angry about transgender people instead of all the mass shootings, they insist, even though you are much more likely to get shot than encounter a trans person in your daily life.

I mean, how many times this week has a trans person disrupted your plans, I wonder? But the far-right wants to make you think you are being inundated with their outrageous demands. It's nonsense.

Always pay attention to people who are trying to make you angry about some issue that you otherwise would probably give no thought to at all. The far-right knows that they can't win you over by telling you what their true plans for America are, but they know that making you angry turns you into putty in their hands.

Ask yourself what is Fox News if now a 24/7 rage monster? Every show, every hour introduces you to a new issue that they want you to freak out and be angry about and the truth is they have been wildly successful at it: they have stolen the peace of mind of your grandparents' generation, who have been deputized and weaponized for decades with utter nonsense like the so-called War On Christmas.

Remember that? Remember Bill O'Reilly salivating over the attacks on Jesus and Santa? Well, guess what, both Jesus and Santa are doing just fine, Christmas is still the biggest shopping event of the year and we are still not living in a nation where saying Merry Christmas results in you being forcibly transported to a concentration camp.

It was all a big cod, as they say in Ireland. Worse, it was all a transparent cod. Fox News and its endlessly angry anchors are a cod. The American far-right with their 'liberals are grooming your kids' rhetoric, the gun grabbers and the invading immigrant caravans, indeed all the greatest hits of the conservative news cycle, it has all been a giant confidence trick to anger and manipulate voters all the way to the ballot box. 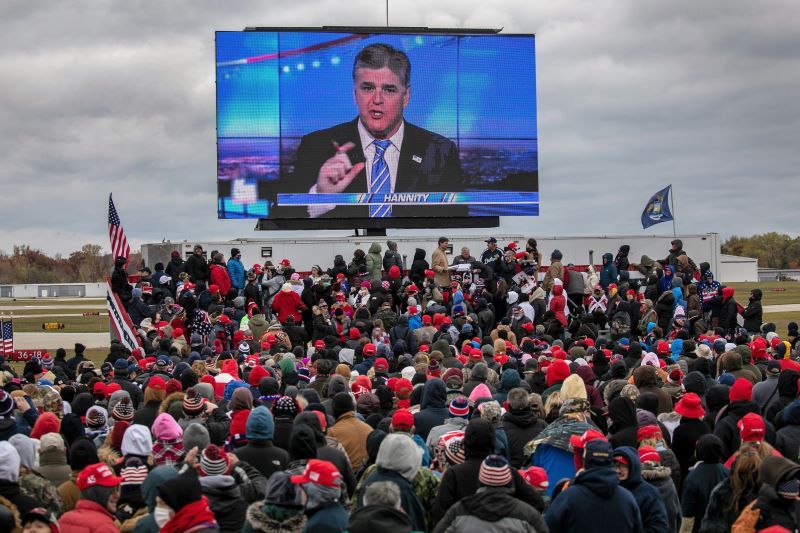 October 30, 2020: Supporters of US President Donald Trump watch a video featuring Fox host Sean Hannity ahead of Trump's arrival to a campaign rally at Oakland County International Airport in Waterford, Michigan, less than a week before Election Day. (Getty Images)

Nations are just like people, after all, they have a breaking point. How angry do you want to be for the rest of your life? Who is your anger actually serving? Is it helping America or is it hindering it? Isn't it time you asked yourself?