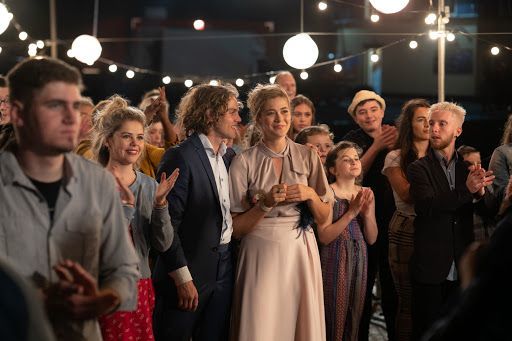 Composer Kieran Kiely plays a central role in Finding You, the new romantic comedy set in Ireland, but not as protagonist - he's the man behind the new film's evocative score.

The new film features Finley Sinclair (Rose Reid) an American violinist, who flunks her big audition at a prestigious New York music conservatory and decides instead to travel to a coastal village in Ireland to begin a semester studying abroad.

There, an unlikely and unexpected romantic relationship blossoms with moonlighting film star Beckett Rush (Jedidiah Goodacre) who introduces her to the gifted Irish fiddler Seamus, who becomes her mentor as she falls in love with Irish music and finally finds a musical mojo.

“I began my work by reading the script, taking note of every mention of music,” Kiely tells IrishCentral. “First and foremost, we needed a violinist who could play both classical music and Irish music as Finley’s character does on screen.” 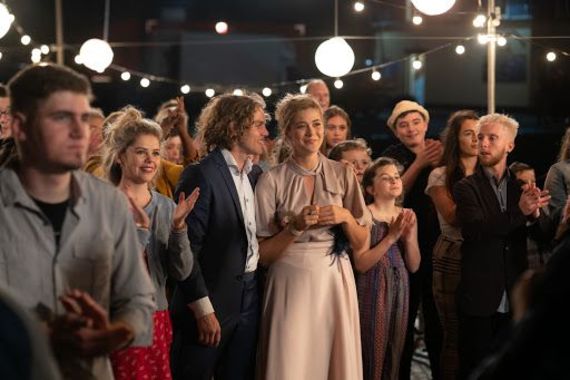 This combination is more of a rarity than you might imagine, given that Irish music is primarily an oral tradition, Kiely explains.

“I began by calling Steve Cooney, whose friendship I’ve cherished since our time working together with Sinead O'Connor, to ask him to be involved and for his thoughts on a suitable fiddle player. After checking out his recommendations, one leaped out at me, Zoe Conway, and serendipitously, she lived in the town where the film was set, Carlingford. My co-composer Tim Williams scored the film's movie within a movie scenes, and some of the more contemporary drama cues. ”

Kiely continues: “Having myself grown up playing both Irish traditional music and classical music on piano and violin, I was intimately familiar with all the musical settings so I immediately had ideas as to what would work and I began by finding examples of music to play for Finding You writer and director Brian Baugh.”

Kiely then enlisted the help of his 12-year-old daughter Sasha to play the part of Finley while he played Beckett and Seamus and they recorded the dialogue.

“I added music and sound effects and sent it to Brian for feedback and he immediately loved this approach as it really helped him envision each musical scene.”

The fiddle, being the most important element of these pieces, meant that Kiely and Conway worked closely, albeit remotely, as they crafted Finely's performances, and Cooney's guitar playing added energy.

“Rose Reid, who plays Finley, then had the formidable challenge of studying all this music and performing it on camera to Zoe’s playing. This whole process took place over a few months prior to the shoot. It was great to see the script come to life with wonderful performances from Vanessa Redgrave, Saoirse Monica Jackson, and Patrick Bergin, to name a few.” 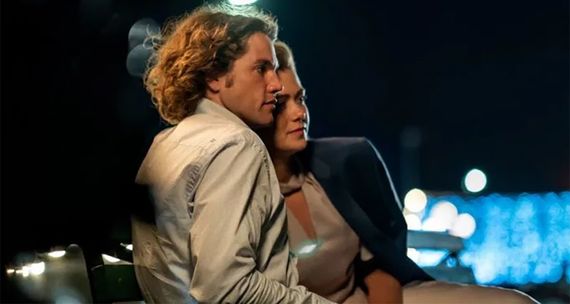 “The strong association I had earlier developed between Finley’s character and my daughter’s line readings of the character's dialogue led to a greater sense of empathy for the protagonist, and I poured that into the music I wrote," Kiely said.

Whether it was the hopeful uplifting cues he composed for Finley as she started her adventure flying to Ireland, or a theme to evoke memories of her brother, or a melancholy theme to express her heartbreak and loss, there was an "emotionally strong impulse to support her with my music on her journey.

"And being a rom-com, it did cry out for some comedic touches in places too, for example, the use of pizzicato strings.”

It was great to hear that the screenings went exceptionally well, with the music being particularly well-received, Kiely adds.

“I can’t remember another occasion when I had to draw on so many different elements of my musical background on a single project, but that is what this film required. My favorite cue that I wrote was for a beautiful scene at the end of the film where Finley visits the final graveyard and I again introduce the theme I wrote for her brother.”

There is no dialogue, so the music takes center stage in the scene. “It was really inspiring to score, the cinematography and direction just stunning. Thanks to all the wonderful musicians that lent their valuable time and extraordinary talents to the score, to Brian whose collaboration I will cherish, and to Sasha for inspiring the music.”

Finding You is now in theaters in the US.