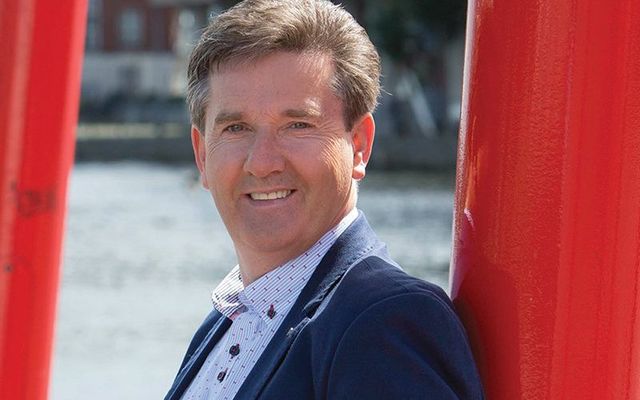 The showbiz career of Daniel O'Donnell is almost unmatched in the Irish music business. Success started in the 1980s and it never left, building year upon year until he was easily selling out venues like The Point in Dublin. Cahir O'Doherty checks out the Donegal singing sensation’s latest memoir, Living the Dream, wherein he discusses his glittering career and some life-changing challenges like his wife Majella's cancer battle.

Every Irish person carries an idea of Daniel O'Donnell in their head, because over there he's as unavoidable as the rain. We usually picture him in a big wooly sweater, singing away by the roaring fireside, cozy as Christmas, the easy listening singing star of a generation of (mostly) women.

Is he a country and western star, is he a pop idol, is he a balladeer, or is he a traditional Irish singer? The answer is yes to all four, but O'Donnell is something else too. He's a mold-breaker, the kind of breakout performer who can make his own rules.

But it turns out that what we know about “wee Daniel” isn't a quarter of the real story.

Far from having an easy life on the fast track to fame, his journey to success was altogether more challenging and complex than we have ever given him credit for.

In Living the Dream (O'Brien Press) O'Donnell, 55, reflects on his youth and experience with an uncommon honesty.  The first thing you probably don't know is that no one is as surprised by his decades at the top as he is himself. It's a long way to travel for a wee lad from Kincasslagh in Co. Donegal, the town where he still lives in between stops at his other home in Tenerife, Spain.

But how did he find his now wildly successful singing career?  He didn't grow up like your typical Donegal lad for a start.

Instead of throwing new wave shapes to Duran Duran and ABC like most of his peers, he was jiving and waltzing in the kind of country dance halls that his contemporaries would have considered social kryptonite.

Maybe because of that he had it tough around his hometown. Some of the local lads called him a sissy every chance they got (and they got a lot of them), and even obvious acts of kindness like offering a bus seat to an elderly passenger would see him ostracized by his too cool for school peers. That hard experience turned him into a bit of a loner.

Over four decades later he still remembers who those awful people were and he doesn't like them to this day, he reveals, not surprisingly. When he was asked early in his career how he could take all the slagging the public (and quite a few critics) would subject him to, he would remind them that he had grown up facing down abuse and bullies for years on end. This was nothing compared to that he would say.

He'd developed a thick hide. Besides, he once played Carnegie Hall. What had they done?

You'll find yourself liking and estimating O'Donnell more after reading this genuinely interesting and well-written book (skillfully co-authored by Sunday World journalist Eddie Rowley, who knows how to keep a story moving). It will make you reconsider the man you thought you knew.

O'Donnell didn't mind keeping it country. He had grown up in what he calls now “poor circumstances.” No running water, his toilet being a covered bucket at the back of an old stone cottage. As a boy he admits to being hypnotized by his neighbors’ flush loo. But thanks to his devoted mother Julia he never felt like he'd missed out.

If he was poor his mother had had it even worse. She had met O'Donnell's father at “the gutting,” which is not the name of some rustic dance club.  It's the what she called the godawful business of gutting fish at Lerwick in the Shetland Islands, off Scotland (in Donegal just after World War II you had to be willing to go wherever there was work).

In Living the Dream O'Donnell recites the red letter days of his and his family's early life with the disarming good humor of the county that he hails from. He was raised among solid, salt of the earth people who were kind and unpretentious and it just rubbed off.

But back in the late 1970s they had no idea how he'd make his way in the world. There was, he says, great concern about what he would do with his life to make a living.

As his wise old neighbor Nora Dan once remarked, he was completely useless with his hands. In fact he might as well have not been born with no hands as they were only there to finish off his arms she concluded. Farming and turf cutting were a complete non-starter for him.

At school he formed closer attachments to the girls than the boys, and he would run a mile rather than stand up to the jealous taunts. Maybe it was because of the early death of his father (he was just six), or maybe he just understood that his nature was too soft or too challenging for his male peers, but they never gave him a minute’s peace.  Although he doesn't sound bitter in the book it's pretty clear that the experience marked him.

People can see the success but often miss the effort that created it. O'Donnell did all of his own marketing in the early days, quite literally.

He would go to concerts and festivals and he even sold his records at Knock Shrine in Co. Mayo, anywhere the plain people congregated. They liked him because he was one of them himself (the book confirms that O'Donnell's religious faith is quiet but sincere).

There's no point in trying to pretend that his rise wasn't the result of a large, fairly conservative sub-section of Irish life who respond to song titles like “The Old Rustic Bridge,” “Forty Shades of Green” and “Home Is Where the Heart Is.”  O'Donnell is not cool and he has never tried to be.

He had enough of the cool kids growing up. They had no time for him then and he doesn't really care what they think of him now. This book is the testament of a person who knows who he is and what he stands for.

Neither Daniel nor his wife Majella are pushovers, clearly. When she faced into her cancer scare in 2013 neither she nor her husband were the type to say die.

Daniel O’Donnell and his wife Majella.

A pair of spirited fighters, Majella turned her battle into an opportunity to raise funds for all Irish sufferers. That's the kind of stand up people that they both are.

Courageously she also volunteered to have her head shaved on live Irish TV in front of a studio audience to raise a target of €50,000 for charity. Her determination paid off. Irish viewers, impressed by her courage and heart, eventually raised €700,000, far exceeding her own goal.

These days she and her husband may be living the dream, but Donegal and Ireland taught them that it means nothing if it’s lived in isolation. To read this absorbing book is to come to grips with the star you thought you knew.

(Living the Dream is available on Amazon Kindle now; the hardcover will be released next month.)