A tale of two Cardinals: One offering welcome to LGBT Catholics and one withholding it 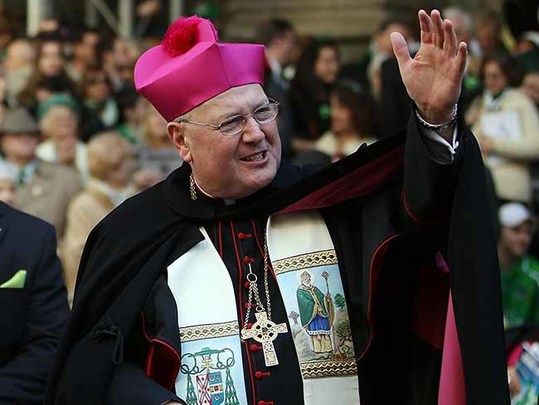 Four years ago Pope Francis stunned the Catholic world by declaring “if a person is gay and seeks out the Lord and is willing, who am I to judge that person?”

You’re the pope, came the answer – and if you’re going to take judging gay people off the table, then shouldn’t the church?

The implications of Francis’ statement are profound and are playing out internationally at a pace that - by the glacial standards of the church – might be called breakneck.

Here in the U.S. two prominent Irish American cardinals are already offering widely differing responses to the pope’s dramatic change in tone, if admittedly not in doctrine.

Cardinal Joseph W. Tobin, 65, was profiled this week in The New York Times for welcoming a group of openly gay people to mass.

An invitation “by a leader of Cardinal Tobin’s standing in the Roman Catholic Church in this country would have been unthinkable even five years ago,” the Times states, undeniably.

Tobin, who hails from Detroit, is Irish American on both sides and “is among a small but growing group of bishops changing how the American church relates to its gay members,” the Times says. “They are seeking to be more inclusive and signaling to subordinate priests that they should do the same.”

But in New York, Cardinal Timothy Dolan, 67, appears to be resisting any reconsideration in tone or doctrine over gays. This week he signaled he would take a different approach by publicly endorsing Daniel Mattson’s controversial new book, “Why I Don’t Call Myself Gay, How I Reclaimed My Sexual Identity and Found Peace.”

Mattson, a writer and public speaker, admits he is only attracted to the same sex but he refuses to call himself gay. In his new book he writes he only made “peace” with his same-sex attractions and his religious faith by embracing a life of chastity.

Paraphrasing Elisabeth Elliot, Mattson writes: “When a man or woman, a boy or girl, accepts the way of loneliness for Christ’s sake, there are cosmic ramifications. That person, in a secret transaction with God, actually does something for the life of the world. This seems almost inconceivable, yet it is true, for it is one part of the mystery of suffering which has been revealed to us.”

For “the life of the world”, Mattson has decided to remain chaste and embrace loneliness “in a transaction” with God. Although he admittedly still “suffers” from same sex attractions, his self-imposed chastity makes it impossible for him to express that part of himself, ever.

Dolan was effusive in his praise for Mattson’s sobering decision this week. “Mattson… shares with us how he has come to understand and accept God’s loving plan for his life, as well as the beauty and richness of the Church’s teaching on chastity…”

For Dolan and Mattson the “beauty and richness” of an LGBT orientation is only to be found in its total abnegation.

Given how apparently hard line he is on the matter, it’s no wonder Dolan was up with the larks to appear on CBS’s “This Morning” four years ago in a visit that clearly intended to reassure conservative Catholics it was business as usual regarding gay people, despite Francis’ surprising change in tone.

“The church must say it's sorry for not having comported itself well many times, many times,” Francis said in his now famous interview four years ago.

“I believe that the church not only must say it’s sorry... to this person that is gay that it has offended,” said the pope. “But it must say it's sorry to the poor, also, to mistreated women, to children forced to work.”

“When I say the church: Christians,” Francis later clarified. “The church is holy. We are the sinners.”

For Cardinal Tobin the very Irish act of offering welcome, which is extended to one and all, is a deep expression of his private faith in public action.

“The word I use is welcome,” Tobin told the Times. “These are people that have not felt welcome in other places. My prayer for them is that they do. Today in the Catholic Church, we read a passage that says you have to be able to give a reason for your hope. And I’m praying that this pilgrimage for them, and really for the whole church, is a reason for hope.”

Conservative clergy members have suggested that alongside Tobin’s welcome to gay Catholics he should have offered them a stern challenge to consider their ways, but the Cardinal demurred.

“That sounds a little backhanded to me,” he said. “It was appropriate to welcome people to come and pray and call them who they were. And later on, we can talk.”

After the Mass, he received “a fair amount of visceral hate mail from fellow Catholics,” Tobin says. One parishioner even went so far as to organize a letter-writing campaign calling on other bishops to “correct” him.

“And there’s a lot to correct in me, without a doubt,” Cardinal Tobin told the Times. “But not for welcoming people. No.”

For over two and a half decades gays were a line in the sand issue for the New York City St. Patrick’s Day Parade Committee - and an unasked for complication to Dolan’s own ministry.

Having finally squared that circle, it’s remarkable to see the LGBT issue has lost none of it’s ability to divide Irish Americans and the Church from each other, even when the Irish Americans in question are high-ranking members of the Church themselves.