Both the New York Times and British Labour Party leader Sir Keir Starmer curiously, and insultingly, used the word "unfold" to describe events in Derry on Bloody Sunday in 1972. 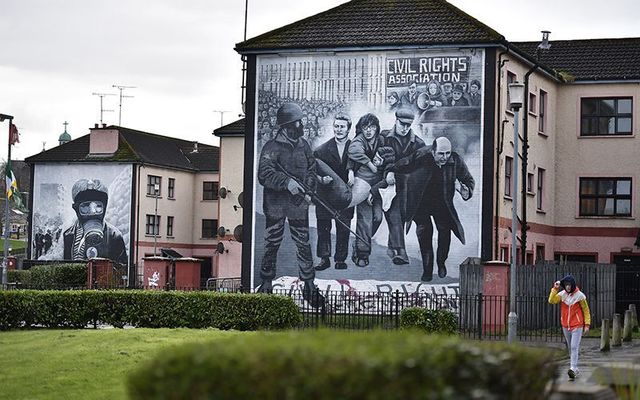 As commemorations took place to mark the 50th anniversary of Bloody Sunday on January 30, there were once again several flagrant attempts to obfuscate the crimes of British soldiers in Derry.

"Gunfire by British soldiers unfolded in Northern Ireland 50 years ago," the New York Times said in a tweet linking to an article about the massacre, suggesting through passive language that the guns fired themselves and the British soldiers of the Parachute Regiment, unfortunately, happened to be carrying them at the time.

Gunfire by British soldiers unfolded in Northern Ireland 50 years ago, taking over a dozen lives and later becoming known as Bloody Sunday. As Northern Ireland reflects on the grisly day, symbols of division and hostility still hold their power. https://t.co/4gb0woDhEV pic.twitter.com/WAaVHb2Clf

The tweet posted on Sunday has so far been quote-tweeted nearly 700 times, with the majority being critical of the use of "unfolded."

Irish MEP Luke 'Ming' Flanagan was amongst the hundreds who replied, stating "you unfold a blanket, not a massacre".

The Times, to its credit, did a far better job handling the grim events of Bloody Sunday in the actual article that was linked in their widely-condemned tweet. The article draws on the findings of the Saville Inquiry to outline how British soldiers callously shot civil rights activists dead in cold blood, ignoring the rules of engagement that their commanders had issued.

However, the language of the tweet that accompanied the report conveys a rather different message and seems to shift blame from the soldiers to no one in particular.

Elsewhere, British politician Starmer tweeted that the "horror of Bloody Sunday unfolded in Derry" 50 years ago, again suggesting that the events in Derry happened of their own accord.

50 years ago, the horror of Bloody Sunday unfolded in Derry.

The victims left behind families and a community that grieved their loss and struggled for decades to have the truth told about what happened.

I send them my deepest respects on this poignant and significant day.

Similar to the NYT tweet, Starmer's tweet has been so far quote-tweeted more than 800 times, again with the majority being critical of his use of "unfolded."

It is difficult to fathom why the leader of the Labour Party, which has a history of sympathy with the Bloody Sunday justice campaign, is afraid to properly condemn the British security forces for their role in Bloody Sunday, especially when a £200 million and decade-long inquiry held them accountable.

Both Starmer and the Times have displayed an uneasiness in calling out Bloody Sunday for what it really was - a regiment of trigger-happy British soldiers who killed 14 citizens in cold blood as they were peacefully protesting for civil rights in their own country.

However, there were far worse attempts to commemorate the Bloody Sunday atrocities than either Starmer or the New York Times.

The Democratic Unionist Party, the largest political party representing the unionist community in Northern Ireland, didn't tweet anything at all in remembrance of the 14 victims, only retweeting a tweet from DUP MLA Gary Middleton calling for the identities of the soldiers involved to be protected.

A sticker campaign around Londonderry is to be condemned. I have reported this to the police.

Conservative MP Johnny Mercer, meanwhile, surprisingly gave a stronger condemnation of the behavior of the British Army than Starmer, describing it as "unequivocally wrong".

What happened on Bloody Sunday was unequivocally wrong. The actions of a few fell far below the standards of the many. And the families were let down by the British State over many, many years.

However, Mercer's statement rings a little hollow considering he has spent his whole political career actively campaigning on behalf of the few soldiers who were charged with Troubles-era killings and atrocities. Mercer is a firm believer in amnesty for all British soldiers who served during the Troubles so that they don't have to go through the rigor of a public trial.

After all, how can the shooting of 14 unarmed protesters in cold blood ever be compared to the horrors of a public trial?

It is insulting to both the victims of Bloody Sunday and their families to suggest that those responsible should be granted amnesty, especially when just four British soldiers have ever been convicted of Troubles-era murders, while none have served a full prison sentence.

It is similarly insulting to sanitize the events of Bloody Sunday with passive descriptions that shift the blame away from the British soldiers responsible.