Have you had enough of assault weapon mayhem yet, America? 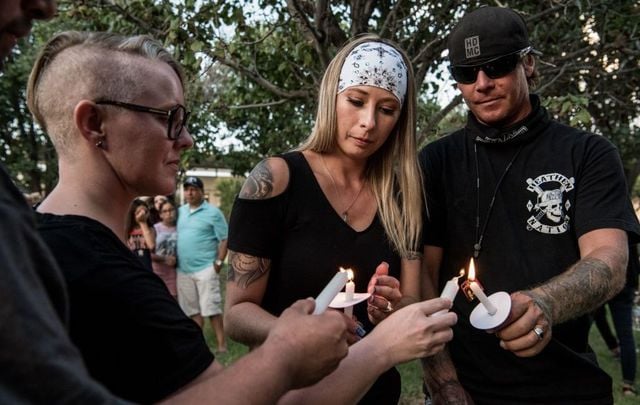 People hold candles at the end of the prayer vigil at the University of Texas of the Permian Basin (UTPB) for the victims of a mass shooting, September 1, 2019, in Odessa, Texas. Cengiz Yar/Getty Images

At what point will you have had enough of assault weapons in America?

The deadliest years on record were 2017 and 2018 but 2019 is already shaping up to rival them with at least 60 killed in mass shootings, 38 of them in the last five weeks.

Now a new study looking at mass shootings over the past 50 years makes clear that 20 percent of the 164 cases have occurred in just the last five years.

The first person to be shot in Odessa, Texas this weekend was a state trooper, a so-called good guy with a gun, who was powerless to protect himself against an assault weapon.

Then the shooter sped off, pointing his weapon at other cars and people on the street and he fired indiscriminately, killing seven people, aged from 15 to 57, and shooting a 17-month-old in the mouth.

A word about AR-15s. You haven't a prayer against them. They turn human beings into Jello. So, yes, they are assault weapons. The exit wounds they create as each bullet passes through and back out of the body are each about the size of an orange.

They have, with help from the NRA and or on-the-take political leaders, turned Main Street USA into a war zone.

Our malls, our public squares, our airports, our highways, every public space in the nation now represents an opportunity and a threat.

This is how we must live now, in a land where freedom increasingly means the possibility of having your brains and vital organs ripped to shreds in a nanosecond by a heavily armed, usually white man with a grudge.

A word about men too. It's not women who are buying military-grade hardware and supplies to go to war on our peaceful streets, is it? The demographic has been surprisingly consistent for decades, being predominantly angry white men with easy access to assault weapons.

American white male masculinity is also manifestly at the center of gun culture. Of the 165 or so mass shootings in the U.S., all but three were committed by men. Isn't it time we asked why? Some words keep repeating in the profiles that emerge: Quiet. Loner. Troubled. Resentful.

You learn the basic arithmetic in high school. Girls can be troubled but no one cares. The gay kids are treated like write-offs. It's the pain of young men that fascinates us, that gets our attention, we worry about them and they worry about themselves. In fact, they can often come to believe that their pain is so special, so unique in the world, that they have the right to make others pay for it.

We rarely give them the psychological help they need, but we do give them access to assault weapons. That's the basic narrative we have to confront now.

Conservatives blame poor mental health for these mass shootings, progressives blame lamentably easy access to assault weapons. We need to start talking about the third aspect, the crisis among men, too.

The current president began his term with a so-called Muslim ban, preventing people from a watch list of Middle Eastern countries from entering the United States until, he said, “we know what's going on.”

But 73.3% of all extremist-related fatalities last year can be linked to domestic right-wing extremists, while 23.4% can be attributed to Islamic extremists. So perhaps we need to notice what's going on in our own back yards first?

Men generally handle questions of self-esteem and loss worse than women, psychologists say. A threat to their status seems to inspire thoughts of payback. There is clearly no shortage of embittered and furious men out there and our absurdly lax gun laws make it easy for them to fatally target others to remind them who's boss.

The life you save could be your own – or your child's.