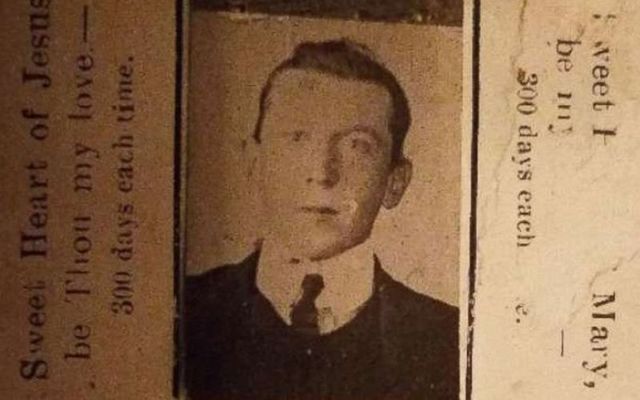 Grand-nieces and nephews of United States Army Private Michael Walsh gathered in Glasnevin Cemetery, Dublin on Friday to receive their uncle’s Purple Heart one hundred years after he was killed on the battlefield during World War I, in France.

In a letter to IrishCentral Finola O’Mahony, Walshe’s great-niece who has spent years researching her uncle’s story explained how a man from County Mayo ended his life on in battle with the US Army in WWI.

“My great uncle Michael Walsh, from Claremorris, County Mayo, emigrated to New York in 1911, and was drafted in June 1917, one of approximately 500,000 non-S born soldiers from 46 countries to fight for the American Expeditionary force in WW1.

“He participated in the battle of the Meuse Argonne, in Company K, 116th regiment, 29th Division, and was killed in action on the 24th October 1918, possibly the last member of his unit to die, before they were pulled back from the front.”

More than 26,000 Americans died during the Meuse-Argonne Offensive. Walsh was one of the last men to lose his life. As O’Mahony put it in a letter to ABC News “his Irish luck had just run out”. Just three days later his company pulled back from the front lines. 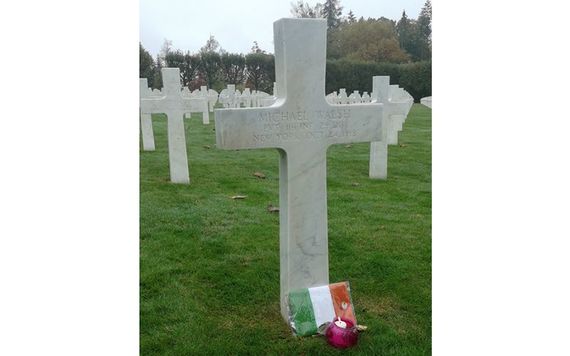 Private Michael Walsh's cross, decorated by his family with an Irish flag, at the Meuse-Argonne American Cemetery near Verdun, France.

O’Mahony explained that after his death “Michael’s parents received a pension and compensation from the US Army, but never received details as to how their son died, where he died etc. They also did not receive the medals that he should have been awarded,  including the victory medal and the Purple Heart.”

For the Walsh family, this brings to a close a long journey, which has garnered them a better understanding of their loved one and his final days of life.

On the anniversary of Walsh’s death this year his family gathered to remember him at the Meuse-Argonne American Cemetery near Verdun, France.

“I have been researching Michael Walsh’s story over the last couple of years, with the objective of providing the family with information about his life experience in New York, and to uncover the details of his war.

“On the 22nd October, this year I led a family group to the Meuse Argonne, to retrace his steps, and to commemorate his death on the 24th October 2018, in a moving ceremony at the Meuse Argonne American cemetery. The group included one niece (Mai O’Mahony, 90) and four nephews, ranging in age from 87 to 70, and included 87-year-old retired New York firefighter Odran Branley, who travelled to Ireland and France for the event.”

Writing to the ABC about her journey she wrote:

"Nothing prepares us for the sight of over 14,000 pristine, white marble crosses, crisply standing to attention in death, as they had paraded in life. 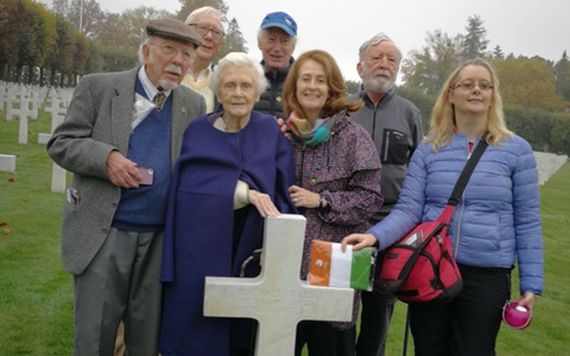 The Walsh family gathered around Michael's grave on the 100th anniversary of his death.

Walsh’s family retraced what they believe was Walshe’s path into the woods of Consenvoye and the Grand Montagne.

She continued "We saw machine gun nests, shell holes, and corrugated German bunkers. Then we came across a large tin bucket, just sitting there where it had lain undisturbed for 100 years, riddled with bullet holes and with the side blown out, in a strange way, a small monument to the suffering of millions and to the grief of families like the Walshs.”