Watch this Irish boys’ choir from Kildare commemorate Armistice day with a beautiful performance of 'The Green Fields of France.' 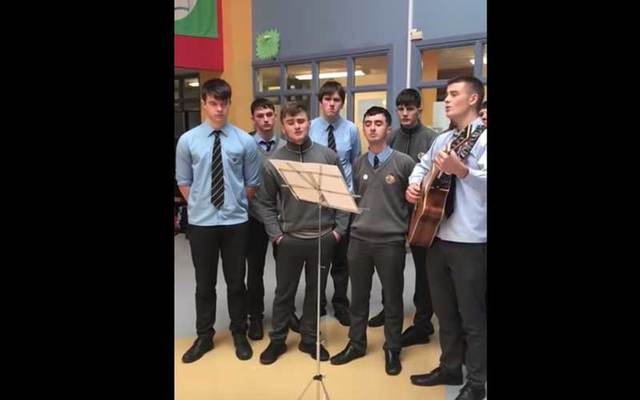 Naas CBS 6th year students perform a choral rendition of ‘The Green Fields of France’ to commemorate 100 years since the end of WWI. YouTube/Tara Heffernan

Watch this Irish boys’ choir from Kildare commemorate Armistice day with a beautiful performance of 'The Green Fields of France.'

For the 100th anniversary of the end of WWI, the sixth-year students of Naas CBS sang a choral version of Eric Bogle’s 'The Green Fields of France' to mark the historic occasion.

Bogle, a Scottish-Australian folk artist, wrote the anti-war ballad, originally titled 'No Man’s Land,' in 1976 after visiting the military graveyards in Northern France. The song reflects on the grave of 'Willie McBride,' a young man who died in World War I.

The track has been covered countless times, most famously by Joss Stone, whose sanitized version of the song caused controversy.

Student Kevin Ó Siondaile, who chose the song for the choir, said he has a personal connection to the song.

"A few weeks ago I approached our teacher about doing a version of this song as I felt it would be a fitting tribute to the tens of thousands of Irish who died in the war, and especially the 52 from Naas," says Ó Siondaile.

"This song is especially poignant for me as my great-great-grandfather was a Chief Petty Officer during the war in the Royal Navy.

"This was a team effort from start to finish and I'm absolutely delighted with the amazing reaction we've received!"