Flooding and power outages left in wake of Storm Lorenzo as seven counties brace for high winds and more rain is expected across Ireland this weekend. 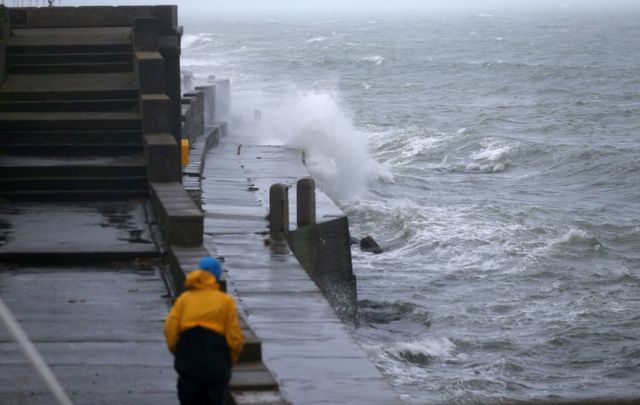 Flooding and power outages have been left in the wake of Storm Lorenzo as seven counties brace for high winds and more rain is expected across Ireland this weekend.

Ireland's meteorological services issued new weather warnings for 11 counties in Ireland, on Friday morning, after Storm Lorenzo left thousands without electricity and affected by flooding across the country.

Met Eireann issued yellow wind warnings for counties Dublin, Kildare, Laois, Longford, Wicklow, Offaly, Westmeath, Galway, Mayo, Roscommon, and Clare on Friday morning, in effect from 8am to 1pm, after a night of heavy rain and high seas in the west of Ireland.

Read more: How Ireland is reacting to Storm Lorenzo with its best humor

Storm Lorenzo, down classed from a class five hurricane, hit Ireland on Thursday but the wind speeds were weaker than expected. Belmullet, in Mayo, and Mace Head, in Galway, recorded the strongest gusts during the storm, with speeds of 107kph felt.

Around 5,000 homes and businesses were left without power on Friday morning. Longford, Kerry and Mayo are among the worst affected areas. Ireland's Electricity Supply Board hopes to have power returned by Friday afternoon.

Donegal town was affected by flooding and emergency services have been pumping water and sandbagging since morning. As many as 40 homes have been affected.

As the storm continues to move east Met Eireann warned the seven counties under a yellow wind warning that "Southwest winds of mean speeds of 50kph to 55kph with occasional gusts of 90kph to 100kph for a time."

While road users across Ireland have been urged to use caution there has been very little disruption to public transport, including airport traffic, rail, and bus.

More rain ahead for Ireland

More heavy rainfall is expected across Ireland for Saturday and Monday, which could bring further flooding.

Temperatures are also likely to rise as tropical air passes over the country.

The rain will cross the west and southwest of Ireland on Saturday but Sunday should be fairly dry before turning to unsettled weather once more on Monday.

Met Eireann’s Eoin Sherlock said “As Storm Lorenzo clears away tomorrow morning, there is more rain to come on Saturday.

“We expect another band of rain to pass through Saturday, this rain is primarily going to fall in the southwest and west.

“It’ll pass through the country but the heavier falls will be to the southwest and the west and then on Monday as well, similar story.

“More tropical air is being brought over the country so there will be a slight increase in temperatures and then they’ll revert to normal temperatures, low to mid-teens.”

How's the weather where you are? Let us know if you've been affected by Storm Lorenzo in the comment section below.

Read more: What Irish products in the US will be affected by Trump’s 25% EU tariff?