Plenty of really strange things you never knew existed are being lit green in honor of St Patrick’s Day. 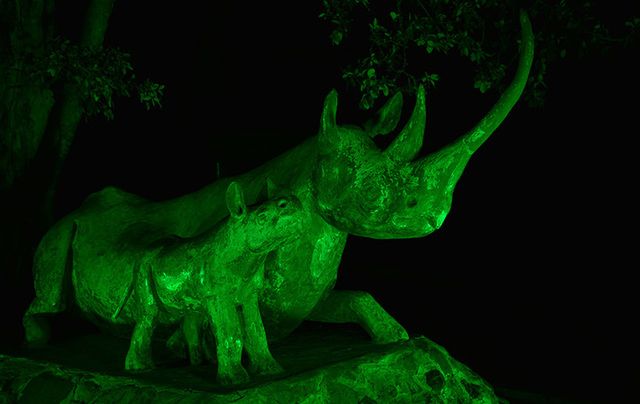 Tourism Ireland released a list of the strangest things that are being lit up green for St Patrick’s Day back in 2017.

Perhaps the quirkiest was the Ethiopian Airlines Airbus A350 which lit up a number of its planes to join in the global celebration of St Patrick on Ireland’s national day.

Addis Ababa is far from well known as a hub of Irish emigrants but a number of the global icons which now go green are located in countries with little in the way of an Irish diaspora.

To the south in Kenya, statues of a mother rhino and her baby in Nairobi National Park were also set to go green.

And it isn’t just in Kenya that sculptures of animals were honoring St Patrick. Down Under, three of Australia’s famous “big things” will be emblazoned with green; statues of  The Big Banana, The Big Kangaroo and The Big Tasmanian Devil.

At the Royal Ontario Museum in Toronto, a life-sized reconstruction of a futalognkosaurus (from the titanosaurs family) skeleton joined the global greening.

And in Canada, a 330-foot replica of Canada’s five cent coin dubbed the Big Nickel turned green to mark the occasion.

The world’s largest fiddle - Big Fiddle of the Ceilidh - on Cape Breton in the Canadian province of Nova Scotia was also lit up.

In Scotland, statues of the Kelpies (horses heads) joined the fun, as did an  Irish-Finnish ice fishing championship held in Tampere, Finland.

The Global Greening initiative was set up by the Irish Government to encourage major landmarks across the world to get lit up in green. The aim being to encourage greater awareness of Ireland’s national day, thus promoting the country as a place to do business in and visit.

Is there a "Global Greening" in your area? Let us know in the comments section, below.