Margaret Keogh, one of two Cumann na mBan members to die in the fight for Irish freedom, was honored by a Dublin City Council commemorative plaque in Ringsend, Dublin, on Sunday. 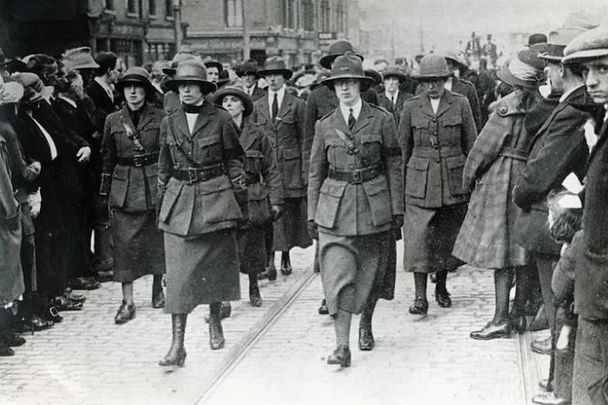 The 19-year-old printer’s assistant, Margaret Keogh, was shot at her home in Ringsend,  on Saturday, July 10, 1921, during a series of raids by British Crown forces.

She died of her wounds two days later and was buried with military honors in Glasnevin Cemetery.

The plaque, unveiled 100 years after her death, was proposed by a group of local residents.

At the event historian, Dr Pádraig Óg Ó Ruairc remarked that Keogh “embodied all of the various strands entwined in the Irish Revolution.”

As well as being an active member of Cumann na mBan, she was a member of the Irish Clerical Workers Union and was the captain of the Croke Ladies Hurling Club. She had been due to play a match in Howth the day after she was shot.

New Dublin Lord Mayor Alison Gilliland said, “Margaret Keogh was a young woman who played an active part in the political, trade union, and sporting life of Dublin and her community.

“Only one of the many women who played a significant role in the struggle for Irish freedom, Margaret was one of the very few who paid the ultimate price.”

The plaque is only the fourth of Dublin City Council commemorative plaques to honor a woman.

Cumann na mBan, of which 1916 hero Countess Constance Markievicz was President for 10 years, was an Irish republican women’s paramilitary organization formed in Dublin in 1914. It became an auxiliary of the Irish Volunteers in 1916.

Although it was otherwise an independent organization, its executive was subordinate to that of the Irish Volunteers, and later, the Irish Republican Army.