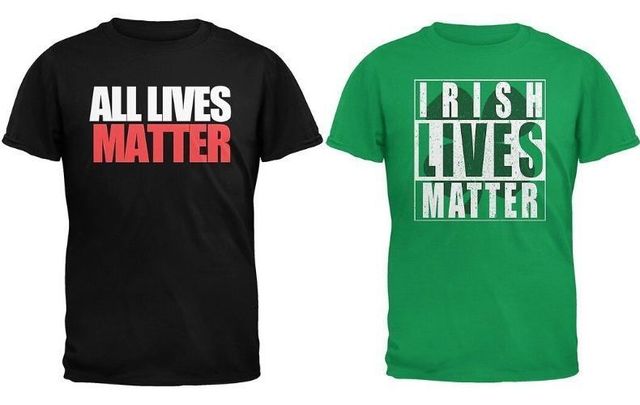 Walmart and Walmart Canada have come under criticism for carrying products that say “All Lives Matter” and “Irish Lives Matter," phrases which are seen by some as a criticism of the Black Lives Matter movement.

As of Wednesday night, both Walmart and Walmart Canada had the “Irish Lives Matter” shirts for sale on their websites via a third party vendor, Old Glory.

The description of the "Irish Lives Matter" products reads: “Irish lives matter, too! Show off your Irish pride with this 100% cotton men's T-shirt, featuring the words, 'Irish Lives Matter' and a shamrock in the background.” 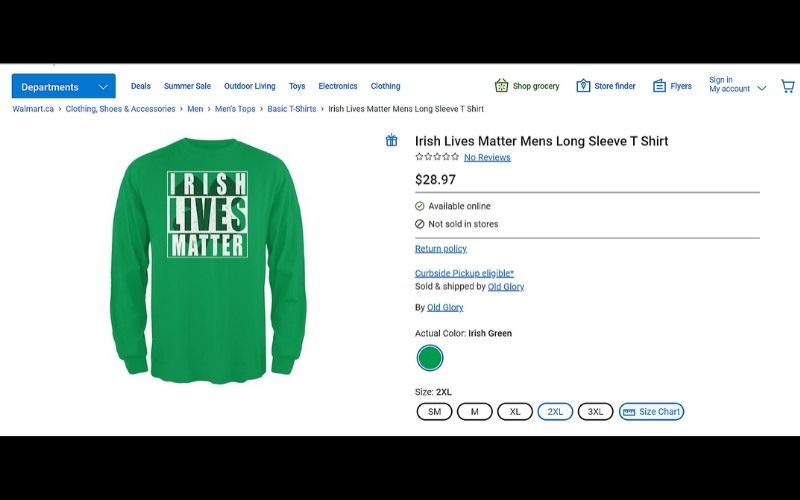 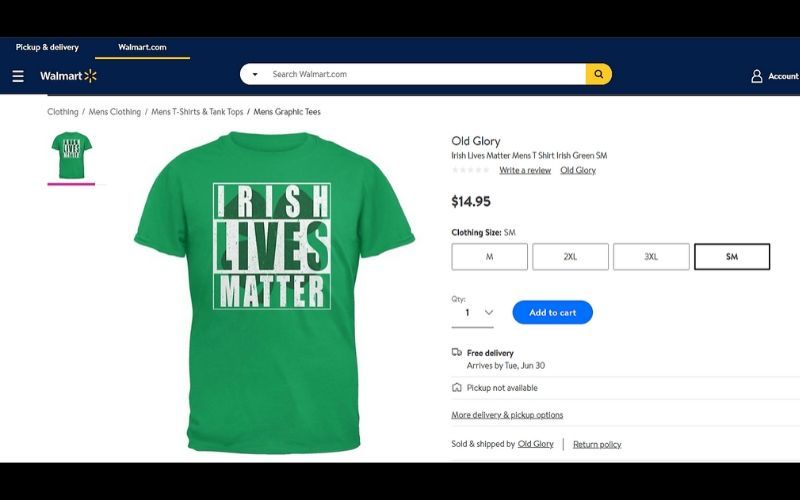 The "Irish Lives Matter" products have come under fire on social media:

Ummm. And Irish lives matter??!?! I’m Irish and would NEVER buy this. We aren’t looking for celebratory gear @Walmart - wake up, this is so embarrassing. #BlackLivesMatter https://t.co/urJ1erJjJh

.@WalmartCanada It's disgraceful that you would sell t-shirts saying All Lives Matter, Blue Lives Matter, and Irish Lives Matter. Clearly you don't understand the need for the #BlackLivesMatter movement. You should be ashamed.

“Yea. Irish Canadian here. I know we've got some history of being exploited and marginalized but these shirts are in bad taste.If [Of] course 'All Lives Matter', nobody is arguing they don't. It's just inappropriate to change the discussion away from 'Black Lives Matter' as it's a legitimate issue to address. This isn't a contest about who's been the most mistreated.”

“I'm Irish. If an Irish Lives Matter t-shirt came out after the British army murdered 14 men and boys at a civil rights march, I'd be happy about it. But to make one to distract from American police doing the same shit to black people is f------ disgusting.”

On June 23, Walmart Canada replied to a complaint about the “All Lives Matter” product on Twitter:

Hello Kate. This item is sold and shipped by a third party seller. We've forwarded your comments to the appropriate department to look into further. Thank you for bringing this to our attention.

While the "All Lives Matter" shirt referenced in the above tweet appears to have been removed from Walmart Canada's website, there are still versions of it available on the US Walmart website as of Wednesday night: 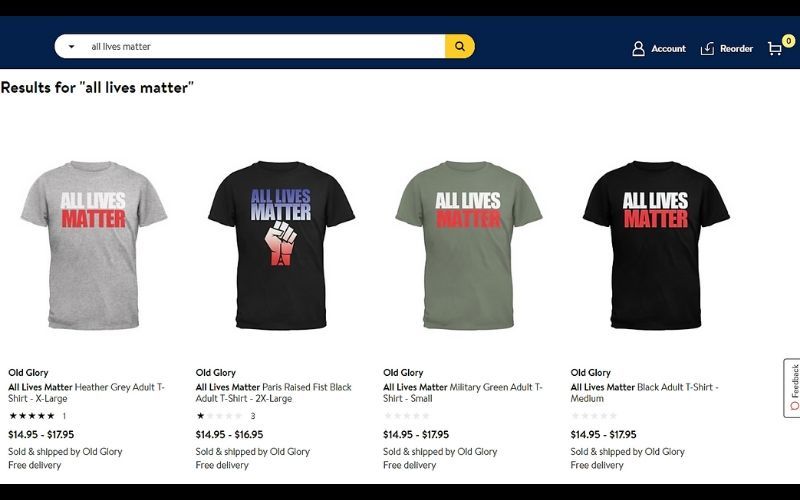 "All Lives Matter" shirts on Walmart's US website on June 24. (Walmart)

The "Irish Lives Matter" shirts are still available for purchase on both Walmart and Walmart Canada's websites as of Wednesday night.

The "All Lives Matter" and “Irish Lives Matter” products are being sold online at Walmart and Walmart Canada through the third-party vendor Old Glory, who describes themselves as “a maker of high-quality, unique designs. T-Shirts, Hoodies, Caps, Beanies, Mugs, and more! Choose from hundreds of our own designs. All items are printed in the USA.”

The complaints about the “All Lives Matter” and "Irish Lives Matter" products come just after Walmart and Walmart Canada issued statements saying that the Walmart Foundation was committing $100 million "to address racism head-on and accelerate change."

On June 5, both Walmart and Walmart Canada tweeted:

We know it takes more than talk. It takes action. We are taking steps to address racism head-on and accelerate change, including Walmart and the Walmart Foundation committing $100 million over five years so we can move forward, together. pic.twitter.com/PKrPvkwnWP

Black Lives Matter does not mean other lives are not important

Black Lives Matter Foundation, Inc, which was founded in 2013 after George Zimmerman was acquitted in the death of Black teen Trayvon Martin, is “a global organization in the US, UK, and Canada, whose mission is to eradicate white supremacy and build local power to intervene in violence inflicted on Black communities by the state and vigilantes. By combating and countering acts of violence, creating space for Black imagination and innovation, and centering Black joy, we are winning immediate improvements in our lives.”

The Black Lives Matter movement has again come to the forefront following the death of Black man George Floyd after Police Officer Derek Chauvin kneeled on his neck for nearly nine minutes while arresting him in Minneapolis on May 25.

In 2014, Alicia Garza, who co-founded #BlackLivesMatter alongside Patrisse Cullors and Opal Tometi, explained: “#BlackLivesMatter doesn’t mean your life isn’t important–it means that Black lives, which are seen as without value within White supremacy, are important to your liberation. Given the disproportionate impact state violence has on Black lives, we understand that when Black people in this country get free, the benefits will be wide reaching and transformative for society as a whole.”