A study of wooden artifacts uncovered at L’Anse aux Meadows in Newfoundland found that Vikings lived and felled trees in the area exactly one millennium ago. 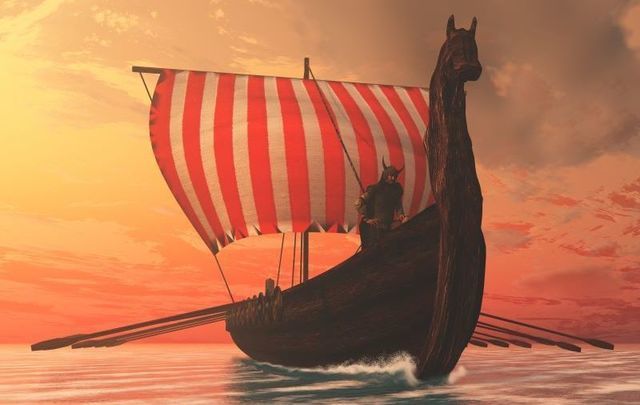 Vikings made the first known crossing of the Atlantic Ocean. Getty

A new study has found that Vikings lived on North American soil exactly 1,000 years ago in the year 1,021 AD, meaning that seafaring Scandinavians accomplished the first known crossing of the Atlantic Ocean between Europe and North America.

A study of wooden artifacts uncovered at L’Anse aux Meadows in Newfoundland found that Vikings lived and felled trees in the area exactly one millennium ago.

The incredibly precise dating was possible thanks to a new method that examined growth rings caused by a once-in-a-millennium cosmic event that showered the Earth with high-energy particles in the year 993.

Scientists were able to find the telltale spike in wooden artifacts used by Vikings in Newfoundland and then count additional rings outside the mark to pinpoint the exact year that the seafarers first landed on North American shores.

Results of the study were published in Nature magazine on October 20.

Archaeologist Thomas McGovern, a professor at Hunter College in New York City who did not participate in the study, told the Smithsonian Magazine that he was impressed by the results.

"The site continues to provide data after all these years. I think the date is totally plausible and fits with Birgitta Wallace's original idea of a fairly short, circa 1000 [C.E.] settlement event," McGovern said.

McGovern has spent more than two decades studying the demise of Norse settlers in Greenland, while Birgitta Wallace, who co-authored the study, spent many years at the L'Anse aux Meadows site as a Parks Canada archaeologist.

The site, which wasn't discovered until the 1960s, offered conclusive proof for the first time that Vikings had traveled to North American shores.

Meanwhile, experts say that the sites were a base of further explorations for the Norse seafarers where Vikings might repair their ships or stockpile provisions.

Similar sites are described as key waypoints in the legendary Icelandic Viking sagas that chronicle the Vikings' trips to what they called Vinland - modern-day Canada and the United States.

Michael Dee, who specializes in the study of isotope chronology at the University of Groningen, co-authored the recent study and said that the discovery helped to contextualize the Viking sagas.

"Here we are fixing in time these somewhat legendary [Norse] sagas. We’re providing some scientific evidence to say at this exact moment in time, this happened, which actualizes them a bit more."

Dee said that Viking voyages to North America were voyages of discovery and a search for new raw materials.

"Many archaeologists believe the principal motivation for them seeking out these new territories was to uncover new sources of timber, in particular. It is generally believed they left from Greenland, where wood suitable for construction is extremely rare."

Co-author Margot Kuitems, also of the University of Groningen, examined wood scraps taken from the L'Anse aux Meadows site at a storage facility in Nova Scotia.

She said that she was certain that the artifacts were crafted by Vikings because they showed clear markings of being crafted with metal tools, which indigenous residents didn't use at the time.

Kuitems added that she wasn't looking for outstanding craftsmanship in the artifacts.

"What we used was basically rubbish, which was really good for research because we were looking for pieces of wood that included their bark edges. If you have an artifact or even a construction beam, often those outer layers are stripped off," she told Smithsonian Magazine.

Viking exploration of North America is chronicled in two epic sagas - The Saga of Erik the Red and The Saga of the Greenlanders. The two pieces of Norse literature intersperse fact with colorful myths and were written several hundred years after the events that they chronicled.

The sagas described how the Norse found plentiful supplies of fish, game timber, and pastureland during their voyages to North America and said that the seafarers established waypoints to enable further exploration of North American shores.

They additionally describe the adventures of a Norse leader called Leif Erikson and describe both violent and peaceful interactions with local people.